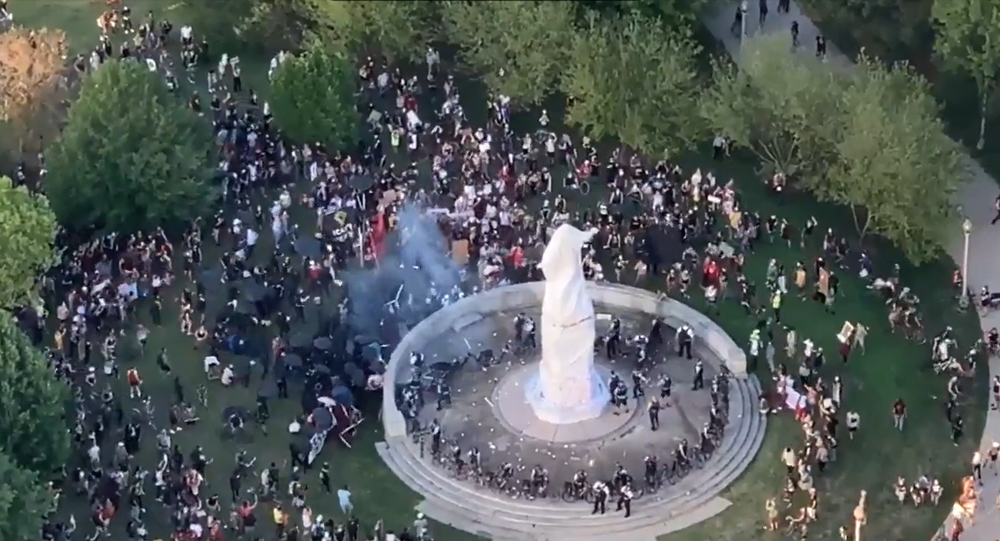 Earlier in the month, the Christopher Columbus statue in Baltimore was removed from its pedestal with ropes and thrown into the water, as acts of vandalism and violence towards historical monuments swept the United States amid a massive anti-racism movement.

Police have clashed with crowds of protesters attempting to topple the statue of Christopher Columbus  in Chicago's Grant Park. At least four officers were injured in the incident, local media reported.

Social media users also say that "at least a dozen arrests" took place during the incident.

​Protesters could be seen throwing fireworks at the Columbus statue, as police officers gathered around the monument trying to hold back the crowd.

A melee in Chicago tonight as violent Marxists attack our Columbus statue and the police.

We can’t surrender to such mobs...pic.twitter.com/chai7RDwRX

​Other videos show protesters attempting to remove the statue with ropes.

​Law enforcement had to use pepper spray to make the crowd back down.

​One video allegedly taken at the scene and shared on social media showed large groups of police units arriving at the site from across the city.

SWAT vehicle pulling up to Indiana and Michigan Ave for group trying to pull down the Columbus statue in #GrantPark pic.twitter.com/QwQd01ZjyF

​Amid an ongoing massive anti-racism movement sweeping the United States since May, there have been incidents of violence towards the statues of figures seen as controversial, with Christopher Columbus particularly denounced for the "enslavement" of Native Americans.

The statue of Columbus in Baltimore was earlier toppled and tossed into the harbour by a group of violent protesters.