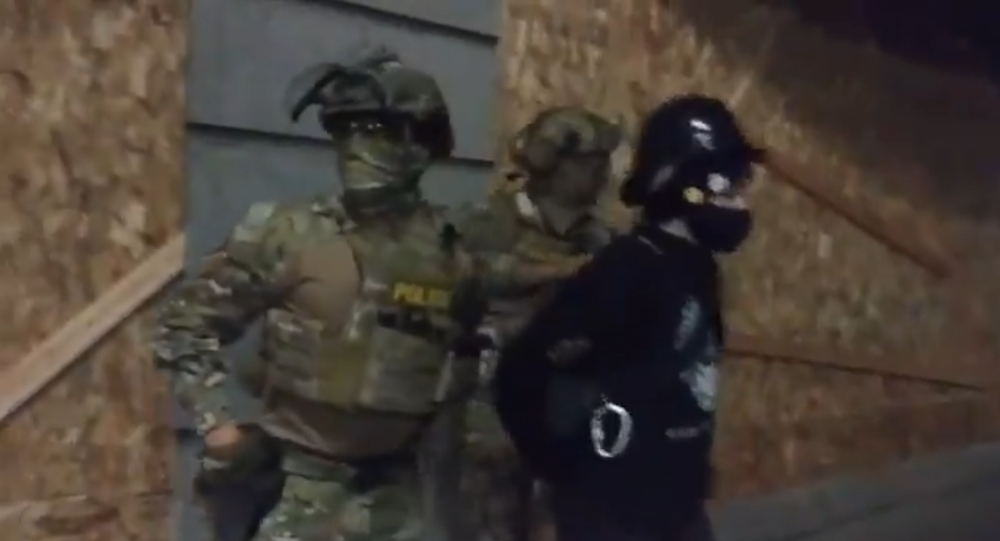 Oregon politicians have denounced US President Donald Trump’s dispatching of federal police to Portland to quell protests there, accusing him of using their city for a political stunt to curry favor with his base as his poll numbers continue to slack.

The dispatching of Department of Homeland Security (DHS), US Marshals Service and other federal law enforcement officers to the West Coast city of Portland in response to weeks of protests has drawn sharp condemnations from local politicians, including Oregon’s governor and Portland’s mayor and police commissioner.

‘Nothing to Do With Public Safety’

On Thursday, Acting Homeland Security Secretary Chad Wolf personally arrived in the city, which he described as being “under siege,” saying he and the federal police intended to “bring an end to the violence perpetuated by anarchists.”

“This political theater from President Trump has nothing to do with public safety,” Oregon Governor Kate Brown said in a Twitter statement Thursday evening.

“The President is failing to lead this nation. Now he is deploying federal officers to patrol the streets of Portland in a blatant abuse of power by the federal government,” she said. “I told Acting Secretary Wolf that the federal government should remove all federal officers from our streets. His response showed me he is on a mission to provoke confrontation for political purposes. He is putting both Oregonians and local law enforcement officers in harm’s way.”

“This, coming from the same President who used tear gas to clear out peaceful protesters in Washington, DC to engineer a photo opportunity,” Brown noted, referring to the June 1 incident in Lafayette Park in which police indiscriminately attacked peaceful protesters and press alike. “Trump is looking for a confrontation in Oregon in the hopes of winning political points in Ohio or Iowa.”

Sen. Jeff Merkley, a Democrat who represents Oregon in the US Senate, also denounced Wolf’s arrival.

“Federal forces shot an unarmed protester in the face. These shadowy forces have been escalating, not preventing, violence. If @DHS_Wolf is coming here to inflame the situation so @realDonaldTrump can look like a tough guy, he should turn around and leave our city now,” Merkley said.

The injured protester, 26-year-old Donovan LaBella, was wounded by a so-called “less lethal” impact munition on July 12 fired by a US Marshal outside Portland’s federal courthouse. The incident caused LaBella to be hospitalized for emergency surgery and sparked the latest round of protests, though demonstrations have been raging in Portland since late May, the same as much of the rest of the US.

Sputnik previously reported that a mysterious spy plane connected to the US Marshals Service had been spotted circling Portland on June 13, prompting five of the state’s federal lawmakers to demand answers from the law enforcement service.

Federal police have also been accused of “disappearing” protesters in late-night kidnappings over the last week, some of which have been captured on film.

Authoritarian governments, not democratic republics, send unmarked authorities after protesters. These Trump/Barr tactics designed to eliminate any accountability are absolutely unacceptable in America, and must end. pic.twitter.com/PE4YfZ9Vqd

​Two protesters who were detained for several hours by federal police on July 15 told Oregon Public Broadcasting (OPB) they were approached by an unmarked van as they walked home, from which burst five officers in camouflage who chased them down and arrested them.

“Feds are driving around, grabbing people off the streets,” one of them says in a dark video they managed to start recording in their pocket before being apprehended. “I didn’t do anything f**king wrong. I’m recording this. I had to let somebody know that this is what happens.”

“I am basically tossed into the van,” the other one narrates. “And I had my beanie pulled over my face so I couldn’t see, and they held my hands over my head.” Both men were released later that night with no charges and even less of a clue as to which agency had arrested them.

“It’s like stop and frisk meets Guantanamo Bay,” attorney Juan Chavez, director of the civil rights project at the Oregon Justice Resource Center, told OPB. “You have laws regarding probable cause that can lead to arrests. It sounds more like abduction. It sounds like they’re kidnapping people off the streets.”

‘We Do Not Want or Need Their Help’

Earlier this week, Portland Mayor Ted Wheeler, who is also the city’s police commissioner, said he told Wolf his biggest problem in restoring order was the drastically increased violence being committed against protesters by federal police.

“I told the Acting Secretary that my biggest immediate concern is the violence federal officers brought to our streets in recent days, and the life-threatening tactics his agents use. We do not need or want their help,” Wheeler said. “The best thing they can do is stay inside their building, or leave Portland altogether.”

However, Wolf doubled down, telling Fox News’ Sean Hannity in a Thursday interview that DHS officers packing up and leaving the city was “not gonna happen on my watch."

“It’s time that we take a stand,” Wolf said, noting graffiti on government buildings as one of the agency’s major concerns.

Indeed, in a statement that day, Wolf provided “a snapshot of the lawless destruction and violence of the past several weeks” that was almost completely composed of incidents of graffiti or minor destruction, such as dismantling fencing and throwing seeds at officers. Almost every one of these incidents is attributed to “violent anarchists” by Wolf.

However, Wolf’s statement is a distortion of the facts, as one Fordham Law professor pointed out, since data collected by Portland Police Department shows a lower-than-average amount of crime and violent crime over the past several weeks.

Just to be clear, almost all crime in Portland—including almost all violence—has been LOWER than average over the past several weeks.

(Also, graffiti isn’t a violent crime, and it looks like over half the acts cited by DHS are graffiti.) pic.twitter.com/YU7mH2z5yb

​The data shows an 18% decrease in total crimes committed between May 29 and June 17, and a 27% decrease in crimes specifically committed against persons, rather than property. However, property crimes were also down 13% compared to the average over the last three years.

It’s no accident that graffiti figures so strongly in Wolf’s mind as indicative of criminal activity: minor property damage like graffiti formed a key part of the “broken windows theory” that came to govern police philosophy in the 1980s and 1990s. The theory, popularized by the police departments of New York City and Los Angeles, held that minor violations of the law encouraged greater violations of the law, such that the presence or tolerance of graffiti or broken windows naturally encouraged muggings, break-ins and worse. However, study after study has proven this theory to be totally false.