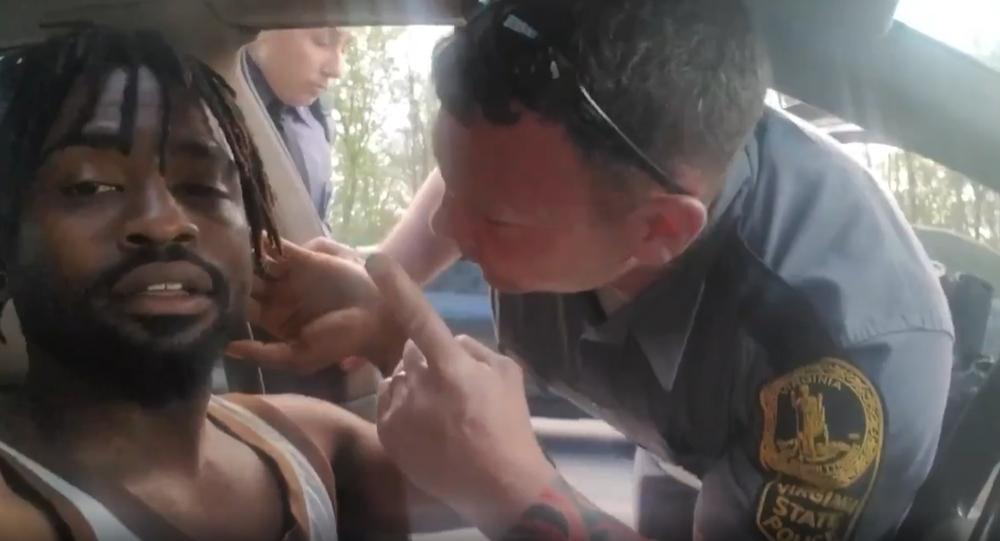 A criminal investigation has been launched by the Virginia State Police after a trooper was observed gleefully taunting and threatening a motorist during an April 2019 traffic stop on the Capital Beltway.

Today, we sent a letter to @MarkHerringVA about Virginia State Trooper Charles Hewitt.

In April 2019, Derrick Thompson was driving to work when Hewitt terrorized and assaulted him. pic.twitter.com/YTSCeDLM9j

“I am a f**king specimen right here,” the state trooper asserted while pointing at his own face.

Thompson continued to narrate the traffic stop while facing away from Hewitt’s direction and into his phone’s camera.

“You’re going to get your a** whooped in front of Lord and all creation,” Hewitt said with a smile on his face.

“I’m giving you to the count of three,” the trooper added. “Now you’re under arrest for disobeying an officer.”

“I was unlawfully detained. This officer has threatened me, and I’m making it known I am no threat to this officer. I’ve been threatened,” Thompson detailed as Hewitt cheekily counted down from three.

“Watch the show folks,” the trooper said before wrapping his arm around the motorist’s neck and pulling him out of the vehicle.

A struggle can be overheard in the background before the video ends.

Thompson was ultimately arrested and received treatment for “a minor abrasion” on his head at the county jail. The motorist received three charges: obstruction of justice, an expired inspection sticker and driving on a suspended license.

"Trooper Hewitt appears to be enjoying himself. He appears to be hamming it up for the camera, and that’s really what’s terrifying," Elrich, who is representing Thompson, told local outlet NBC Washington. The attorney explained that his client “was driving to work when Hewitt terrorized and assaulted him.”

“The conduct displayed by Trooper Hewitt during the course of the traffic stop is not in agreement with the established standards of conduct required of a Virginia trooper. Nor is it characteristic of the service provided daily across the Commonwealth of Virginia by Virginia State Police personnel,” Col. Gary T. Settle, the superintendent for the state police force, said in a statement.

Hewitt has been placed on administrative leave amid the investigation.

The state police’s criminal probe was announced just days after 22-year-old Jake Preston Dooley, then a deputy of Virginia’s Fauquier County Sheriff's Office, was terminated from the force and accused of fabricating a roadside attack story.

Preston reportedly provided authorities with the false narrative after he was found passed out at an intersection around 7:15 p.m. local time on July 10.

Dooley was also slapped with charges of obstruction of justice and falsely summoning law enforcement following the sheriff’s office’s investigation. Though released on bond, Dooley “will be transported to a regional facility for a mental health evaluation,” according to authorities cited by the New York Daily News.