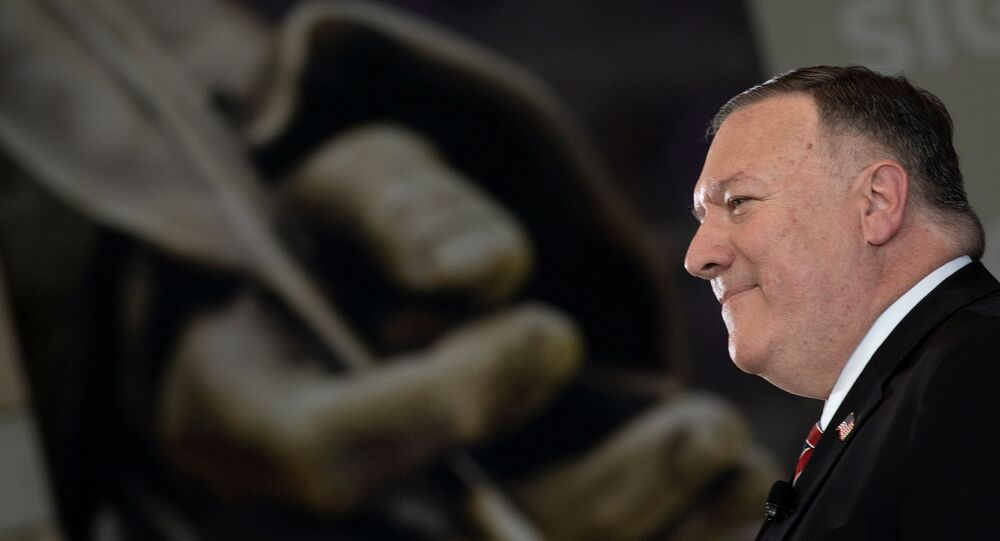 ‘America is Fundamentally Good’: Mike Pompeo Lays Out a Hierarchy of Human Rights

The United States’ top diplomat, a devout Evangelical, has said that the American way of life is under threat and that the US should choose to promote those rights that fit most with its national interests.

Mike Pompeo has spoken out against the “proliferation” of human rights, saying that the United States should prioritise private property and religious freedom.

The US secretary of state on Thursday unveiled a report of the Commission on Unalienable Rights, a mix of academics and activists he formed a year ago to review the role of human rights in US foreign policy.

Speaking at the National Constitution Center in Philadelphia, he acknowledged the moral failures of the United States, like the existence of slavery, removal of Native Americans, and interventionist foreign policy – noting that “America is fundamentally good” nevertheless.

The secretary of state also appeared to refer to the recent social unrest in the United States, sparked by the in-custody death of George Floyd, saying that “the very core of what it means to be an American, indeed the American way of life itself, is under attack”.

“The rioters pulling down statues thus see nothing wrong with desecrating monuments to those who fought for our unalienable rights – from our founding to the present day,” he said, also attacking The New York Times for spouting “Marxist ideology” over its 1619 Project on the legacy of slavery in the US.

Mike Pompeo, who is rumoured to nurture plans for a 2024 presidential run, contended that the US should choose which rights to promote because some of them are “foundational” and some aren’t worth defending.

In its report, the commission wrote that while the 1948 Universal Declaration “does not explicitly establish a hierarchy of rights”, US foreign policy should determine which rights “most accord” with national interests.

The commission’s report, Pompeo highlighted, gives foremost importance to property rights and religious freedoms. He did not elaborate on the fact that property rights included ownership of people at the time of the United States’ foundation.

Nor did the diplomat mention the rights which he viewed as inessential, although the current administration has been criticised by rights advocates for restricting access to abortion services for women and stripping transgender people from non-discrimination protections.

Human rights campaigners have lashed out at Pompeo and the newly-published report, criticising the idea of a selective vision of freedoms that should be defended.

“The US government cannot unilaterally redefine which human rights will be respected and which will be ignored,” said Tarah Demant, who leads the group’s Gender, Sexuality and Identity Program.

“This report, made through an illegitimate process, only further shows the contempt this administration has for human rights and its desire to excise certain rights,” she added.

“There is this idea that there’s a proliferation of rights that undermines all rights, and that’s simply not the case,” said Amanda Klasing from Human Rights Watch. “You’re not seeing a proliferation of rights; you’re seeing a fuller protection of all rights for all people. And I think that says something that it is seen as threatening to Pompeo and the state department.”