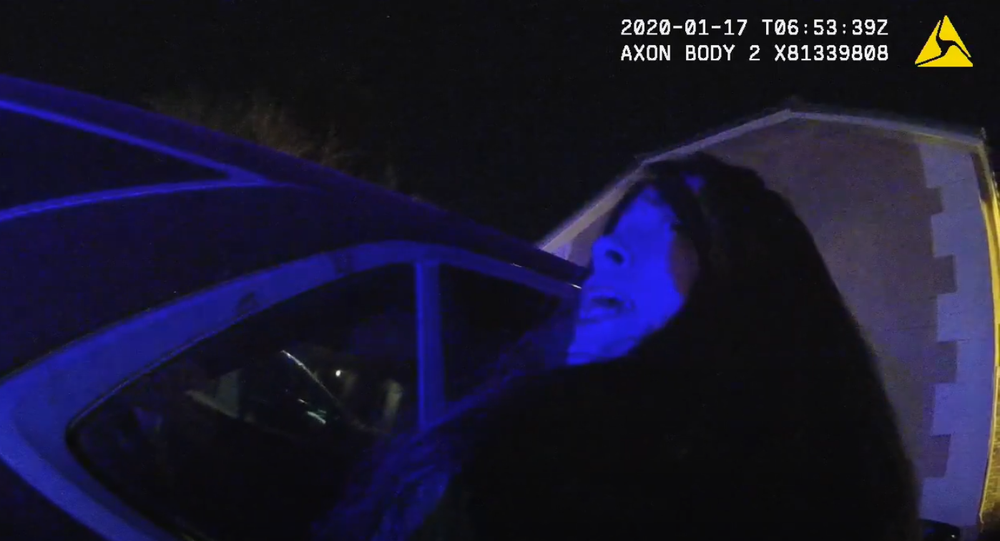 An officer of Arizona’s Phoenix Police Department (PPD) has been accused of police brutality and assault following the publication of body camera footage showing him tackling a 23-year-old woman during a January traffic stop. Related footage appears to show officers of varying ranks conspiring to protect each other from possible consequences.

Footage of the January 15 arrest begins with Phoenix Police Officer Michael McGillis notifying the department of an individual who was allegedly going south in a northbound lane. The officer is seen exiting his vehicle and requesting driver Mariah Valenzuela’s license around the 1:05 timestamp.

“Why am I getting pulled over?” Valenzuela asks after exiting her vehicle.

Despite her repeating the question twice, the 23-year-old woman is not given a response by McGillis and, at his inquiry, informs the officer that she is not the owner of the vehicle.

Be advised, the footage below contains scenes that may offend some audiences.

“Do you have ID on you?” McGillis asks again of Valenzuela, who abruptly replies, “No, why am I getting pulled over?”

It’s then that the officer instructs her to put her hands behind her back, and a struggle ensues between the two. Valenzuela is overheard letting out blood-curdling screams, as the body camera is obstructed from recording the scene.

After being slammed to the ground, the 23-year-old driver is then able to clarify to the officer that her ID is in her car. Amid screams and further repetition of her initial question, McGillis informs the woman that she was driving in the wrong lane.

“Why did you tackle me?” Valenzuela asks while being handcuffed on the ground.

Seconds later, McGillis appears to slam her into the SUV before asking, “Why don’t you act like a young lady?”

“You’re manhandling me! You slammed my head!” she screams.

Valenzuela was escorted to a police cruiser after a PPD sergeant arrived on the scene. She was later charged with resisting arrest by the Maricopa County Attorney's Office.

However, questions regarding the PPD’s ethics and possible misconduct have arisen as additional video from the accompanying sergeant’s body camera appeared to show the officers discussing how to cover up any possible wrongdoing during the arrest.

“She’s like super emotional, super looney tunes,” the sergeant is overheard alleging to Lt. Erik Dobrnasky, noting that he is about to file a use of force report on McGillis’ encounter.

Be advised, the footage below contains scenes that may offend some audiences.

“I’m getting ready to review the body camera right now, she’s super all over the place,” the sergeant is heard saying in the recording.

“Review the camera, make sure it looks good to go, and then we’ll do the use of force just to CYA everybody, cover them,” Dobrnasky responds, using the slang for “cover your a**.”

Brian Foster, Valenzuela's attorney, revealed to local news outlet Arizona Republic that he has filed a notice of claim against the city of Phoenix and the Maricopa County Attorney’s Office. Foster’s forthcoming lawsuit seeks $2 million for his client and accuses McGillis of assault and police brutality.

A Wednesday PPD release on the traffic stop detailed, “The Phoenix Police Department Professional Standards Bureau evaluated the body worn camera and other evidence, and determined there was no violation of policy on behalf of Officer McGillis.”

The department also claimed the cop has “no other sustained allegations of misconduct within the last five years.”

This incident comes just a year after PPD Officer Christopher Meyer was seen threatening couple Dravon Ames and Iesha Harper at gunpoint after their 4-year-old daughter swiped a baby doll from a local Family Dollar store.

Ames and Harper went on to file a $10 million lawsuit against the city of Phoenix, and Meyer was ultimately terminated from the force in October 2019 - despite the disciplinary review board recommending the officer be suspended without pay for six weeks.

“In this case, a 240-hour suspension is not sufficient to reverse the adverse effects of his actions on our department and our community,” Phoenix Police Chief Jeri Williams said at the time.