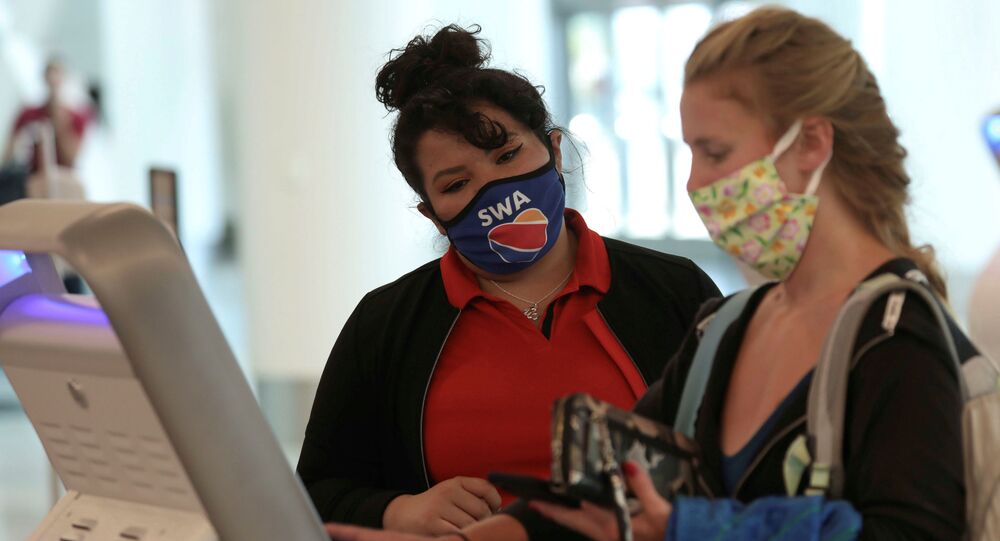 WASHINGTON (Sputnik) - The resurgence of COVID-19 cases is hanging over the US economy like a thick fog of uncertainty, with recovery likely suppressed and job market recovery hurt by the second wave of the pandemic, Federal Reserve Governor Lael Brainard said on Tuesday.

"A thick fog of uncertainty still surrounds us, and downside risks predominate. The recovery is likely to face headwinds even if the downside risks do not materialize, and a second wave would magnify that challenge," Brainard said in a web-streamed speech entitled Navigating Monetary Policy through the Fog of COVID. "It is unclear whether the rapid pace of labor market recovery will be sustained going forward, and risks are to the downside."

The US economy shrank 5 percent in the first three months of 2020 for its sharpest decline since the financial crisis of 2008/09, as most of the 50 states in the country went into lockdown to stem the outbreak of the COVID-19.

While businesses have largely reopened over the past two months, economists still warn of a double-digit recession for the quarter ended June. This is despite some noticing "green shoots" for recovery from the net gain of 7.3 million jobs in the May-June period, after a loss of more than 21 million between March and April.

Brainard said the earlier-than-anticipated recovery in jobs has been accompanied by a sharp increase in the virus’ spread in many areas in the United States.

"Even if the virus spread flattens, the recovery is likely to face headwinds from diminished activity and costly adjustments in some sectors, along with impaired incomes among many consumers and businesses," she said. "On top of that, rolling flare-ups or a broad second wave of the virus may lead to widespread social distancing - whether mandatory or voluntary - which could weigh on the pace of the recovery and could even presage a second dip in activity."

The Fed governor also cautioned that a second COVId-19 wave could reignite financial market volatility and market disruptions at a time of greater vulnerability.

"Nonbank financial institutions could again come under pressure, as they did in March, and some banks might pull back on lending if they face rising losses or weaker capital positions."

As for the labor market itself, the pace of improvement may slow if a large portion of the easiest gains from the lifting of mandated closures and easing of capacity constraints had already occurred, she said.

"Moreover, weekly COVID case counts have been rising, and some states are ramping up restrictions. These developments mostly occurred after the reference period for the June employment report," Brainard said.

On a more micro front, the virus may cause durable changes to business models in a variety of activities, resulting in greater reliance on remote work, reductions in nonessential travel, and changes to commercial real estate usage and valuations, she said.

"In downside scenarios, there could be some persistent damage to the productive capacity of the economy from the loss of valuable employment relationships, depressed investment, and the destruction of intangible business capital. A wave of insolvencies is possible," she said, alluding to bankruptcies, which were expected to breach the 2019 number of 6,800.

Brainard said fiscal support will remain vital to keeping the economy afloat, adding that the Fed had no intention of pulling back on the more than $1 trillion of spending it has already committed to helping the nation’s recovery.