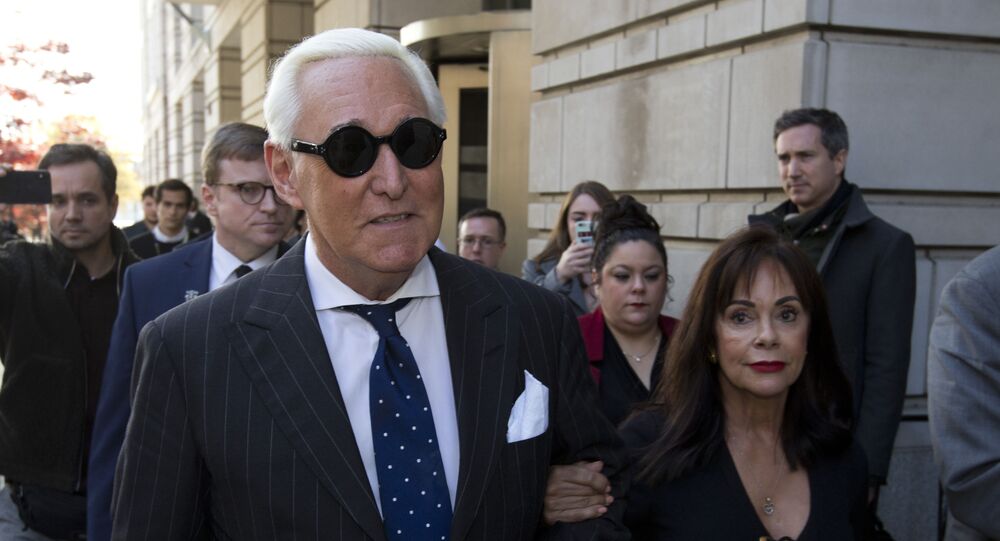 In February, Roger Stone, Donald Trump’s long-time ally and former campaign advisor, was sentenced to 40 months in prison after he was found guilty of seven counts of obstructing justice and other charges in relation to a so-called “Russiangate” probe. Last week, the US president commuted this sentence, labelled by his press office as “unjust”.

Roger Stone praised Donald Trump as “a man of enormous courage”, “great justice and fairness” during his interview to Fox News’ Sean Hannity, following news that the US president commuted his impending prison sentence. For Stone, who was preparing to report to prison on Tuesday, the act meant nothing else but a salvation of his life:

“I guess I would have to say the most important thing here is the courageousness of the president's act”, Stone said during his first public interview since his commutation was announced on 10 July. “I know there were many, many people who told him in an election year, 'Don't do this. Let Roger Stone wait for a pardon after the election.' Sean, I don't think I would have lived that long, not with my asthmatic condition. Not with, now 60 COVID-19 cases in that prison”.

"So I have deep affection for Donald Trump because I've known him 40 years”, he continued. “…I knew he would take some shots for this, but I think most people, most fair-minded people, understand he saved my life and at least on-paper he gave me a chance to fight for vindication”.

Trump’s former advisor described the trial as “the most horrible experience you can have”, arguing that “99 percent” of those who decide to plead “not guilty” in an American trial system “lose” because they are “up against the horrific and deep-pocketed resources of the federal government and these really sadistic, arrogant, politically-motivated prosecutors”.

Stone then continued by saying that he had “a biased judge” during the trial, referring to Amy Berman Jackson, a “staked jury” and “a corrupt jury forewoman”, implying the scandal around Tomeka Hart, a jury foreperson in the case who previously published some social media posts critical of President Trump. According to Stone, who quoted his “friend” and Fox News host Tucker Carlson, his trial was “over before it started”.

“She [US District Judge Amy Berman Jackson] ignored all the legal precedents in that [sending Stone to jail], she ignored my health conditions, she ignored the conditions at the prison at that time, and she ignored the current policies of the DOJ [Department of Justice] and the BOP [Bureau of Prisons]”, the political consultant said.

Trump’s long-time supporter and aide Roger Stone was convicted in November 2019 on seven counts of obstruction of justice, lying to Congress and witness tampering over his 2017 testimony to the House Permanent Select Committee on Intelligence in relation to Robert Mueller’s investigation into the Trump campaign’s alleged collusion with Russia and communications with WikiLeaks during the 2016 US pre,sidential election. The claims of alleged collaboration and false witness bearing were denied by Stone, who dismissed “Russiangate” probe as a “hoax”. In February Stone was sentenced to three years and four months in prison.the

His legal team unsuccessfully tried to get US District Judge Amy Berman Jackson disqualified from the case citing her potential bias and set up a new trial following the revelations of political leanings of forewoman Tomeka Hart. In April, Judge Jackson denied Stone's attorneys’ request for a new trial, stating that concerns about Hart’s alleged bias were “unmoored from facts”. She also stated at that time that her ruling was “final” and “the defendant must surrender for service of his sentence designated by the Bureau of Prisons”.

On 10 July, White House revealed that the US president signed an “Executive Grant of Clemency commuting the unjust sentence of Roger Stone, Jr.”, which was later released to confirm that Donald Trump commuted “the entirety of the prison sentence” imposed upon Stone “to expire immediately”.

“I also commute the entirety of the two-year term of supervised release with all its conditions; and finally, I remit any unpaid remainder of the $20,000 fine imposed,” the order said.

Stone was expected to start serving his prison sentence on 14 July.