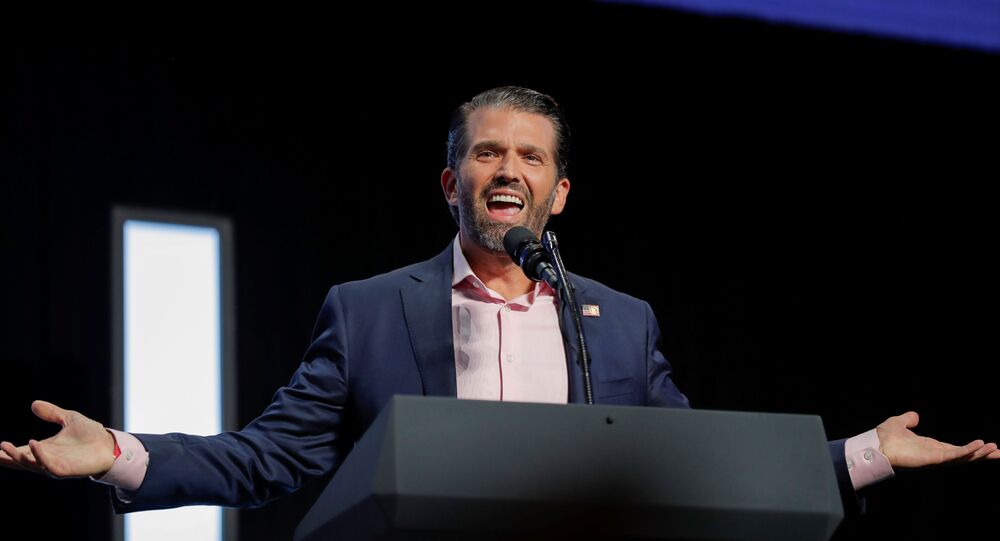 After nearly two decades, the 2001 public intoxication arrest records of Donald Trump Jr. have been made public, casting a light on the 42-year-old’s past issues with alcohol and the US president.

Droves of party people venture to New Orleans, Louisiana, every year to celebrate Mardi Gras and take advantage of the state’s lax open container policy. According to new arrest documents obtained by America Blog, US President Donald Trump’s eldest son was one of those partygoers - until he managed to get arrested for public intoxication at 6:15 a.m. local time on February 25, 2001.

He would go on to spend 11 hours in jail, according to the New York Times.

Documents cited by America Blog also noted that Don Jr. was paroled with a $300 bond, and that he had entered a not guilty plea. The case was ultimately closed on July 25, 2001.

The release of the now 42-year-old’s 2001 arrest documents comes just one day before the anticipated release of “Too Much and Never Enough: How My Family Created the World's Most Dangerous Man,” which provides a deep psychological dive into the Trump family, as told by the US president’s estranged niece, clinical psychologist Mary Trump.

While the documents are new to the public, the story behind Don Jr.’s 2001 arrest and struggles with substance abuse have been known for quite some time.

During a 2004 interview with New York Magazine, Trump’s eldest son spoke on what the publication described as his “reputation for getting into drunken, do-you-have-any-idea-who-I-am? fights.”

“I used to drink a lot and party pretty hard, and it wasn’t something that I was particularly good at,” he told the magazine while laughing. “I mean, I was good at it, but I couldn’t do it in moderation. About two years ago, I quit drinking entirely. I have too much of an opportunity to make something of myself, be successful in my own right. Why blow it?”

It would appear the 2001 arrest may have been the catalyst for Don Jr.’s alleged sobriety, but his reason for picking up the bottle in the first place may have been closer to home, according to Scott Melker, his former classmate at the University of Pennsylvania’s Wharton College.

Recounting his personal experiences, Melker detailed in a 2016 Facebook post that he observed the now-US president smack his namesake across the face and demand that he "put on a suit and meet me outside” after seeing him dressed in a New York Yankees jersey.

“Donald Jr. was a drunk in college. Every memory I have of him is of him stumbling around campus falling over or passing out in public, with his arm in a sling from injuring himself while drinking. He absolutely despised his father, and hated the attention that his last name afforded him,” Melker detailed.

“His nickname was "Diaper Don," because of his tendency to fall asleep drunk in other people's beds and urinate,” he alleged. “I always felt terrible for him.”

Despite over a decade of alleged sobriety, Don Jr. has not let his own struggles with substances stop him from hurling addiction-related allegations at his father’s political foes - and child star-turned-nightclub owner Lindsay Lohan.

In his defense he’s a much better driver when he’s sober. #beto https://t.co/U11V8tmzAL

Lindsay Lohan is out after 4 hours on a 30 day sentence. That will teach her a lesson!!! well actually um yea no.. no it probably wont

Whats the over under in weeks on the next Lindsay Lohan drug/alcohol induced hospitalization jail sentence etc...??? Just askin!?!?

“I think, like anyone else, I made my mistakes,” Don Jr. told the New York Times in 2017. “We have to be honest with ourselves. I’m not good at it, moderation. You have to have the conversation, be a realist, and say, ‘I guess I’m not doing myself any favors.’”