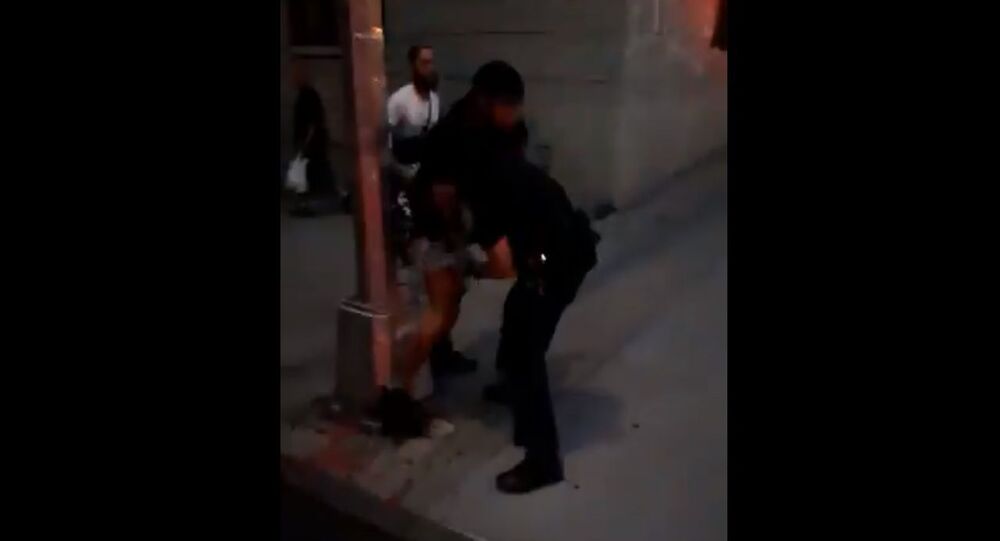 Following the killing of African-American man George Floyd and the subsequent protests against racism and police brutality, the US government has embarked on a path of banning American police from using chokeholds and other "violent" means of apprehension. But it seems that the new policy could backfire on the men and women in blue.

The upcoming change to how New York police handle suspects might not work out very well and, in fact, could threaten officers' work, the Sergeants Benevolent Association, an NYPD police union, wrote in a post on Twitter. The union accompanied the post with a video of a violent encounter between an NYPD officer and a protester on 1 July that revealed the trouble policemen could face when adhering to the new rules being pushed for by the city's Mayor Bill de Blasio as well as the US government and Congress.

The two officers seen in the video went to the Bronx to disperse a crowd of protesters and arrest a suspect, who then vehemently resisted the apprehension while the rest of the demonstrators surrounded the policemen and demanded that they release the man. As the officers struggled to get him in the car without using "violent" methods, one of the officers tried to push back a protester, but ultimately ended up in a headlock – a type of chokehold that the NYPD will soon be officially banned from using.

DeBlasio is a FAILURE in every sense of the word. The only Mayor in America where the people have a petition to have him removed. An honorable profession in the NYPD has been destroyed by one man who simply hates cops. https://t.co/MJg8eih6RA

It took the policeman around 20 seconds to fight back and get out of the hold, while he was dragged around on the street by the perpetrator to cheers of approval and taunts from the crowd. The attacker escaped, reportedly leaving the officer with a gash on his head, but turned himself in a week later.

While the name of the person who put the officer in a headlock has not been revealed, the New York Post reported that he is a known member of a local gang with 11 previous arrests, including for gang assault. Despite the fact that he attacked the officer, he was initially released until further notice as the incident is still being investigated.

"The NYPD was disappointed that the individual was not charged initially. The violence against the police officer speaks for itself. We are now in discussions with the District Attorney regarding the case", an NYPD spokesperson stated.

The video of the encounter has emerged ahead of an important vote in the New York City Council that could make the use of chokeholds by police officers a misdemeanour punishable with a jail sentence of up to one year. The measure is being reviewed as a part of a broader political trend in the US that was announced in the middle of June by President Donald Trump to reduce the use of violence by police officers in the country.

While neither of the police reform bills proposed by the Republicans and Democrats has been approved by Congress, both include a ban on chokeholds to some extent, as well as a number of other measures to prevent police violence. The measures are being considered in response to nationwide protests against racism and police brutality, which were sparked by the death of African-American man George Floyd, who suffocated to death due to a police officer placing his knees on Floyd's neck and back during an arrest, restricting the airflow to his lungs for over eight minutes.