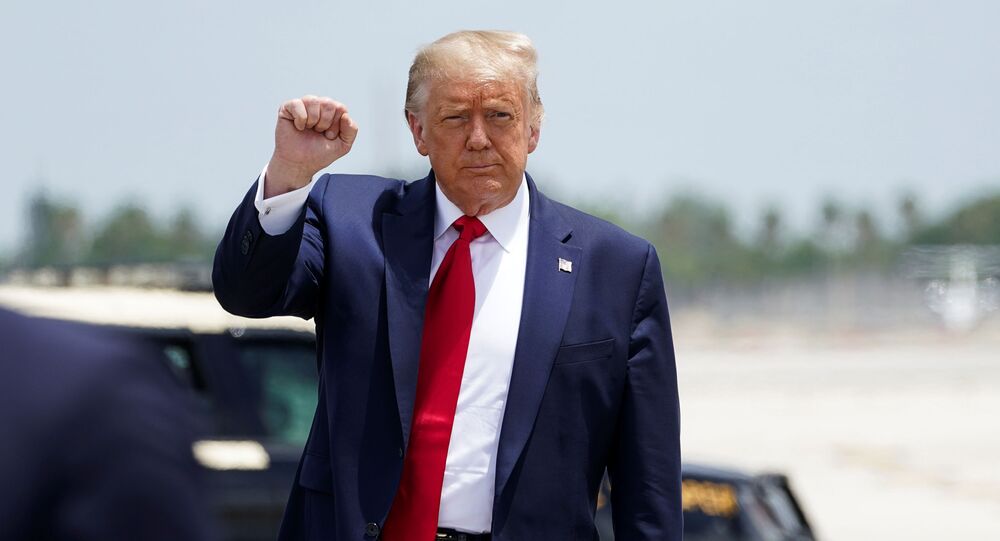 US President Donald Trump asserted to Telemundo in a recent interview that the Supreme Court's Deferred Action for Childhood Arrivals (DACA) decision has granted him "tremendous powers" that would allow him to sign an executive order granting DACA recipients "a road to citizenship."

"You have breaking news, " Trump said during his interview with Telemundo reporter Jose Diaz Balart on Friday. "I'm gonna do a big executive order - I have the power to do it as president - and I'm going to make DACA a part of it."

"If you look at the Supreme Court ruling [on DACA], they gave the president tremendous powers ... based on the powers that they gave, I'm going to be doing an immigration bill. One of the aspects of the bill ... will be DACA - we'll give them a road to citizenship," he said.

BREAKING: President Trump tells Telemundo’s @jdbalart he will sign an executive order on immigration that will include DACA in the coming weeks. #mtpdaily

Trump: “One of the aspects of the bill is going to be DACA. We are going to have a road to citizenship.” pic.twitter.com/M926cty8A1

Senator Ted Cruz (R-TX) took to Twitter within an hour of Trump's comments and argued "there is ZERO constitutional authority for a President to create a 'road to citizenship' by executive fiat."

There is ZERO constitutional authority for a President to create a “road to citizenship” by executive fiat.

It was unconstitutional when Obama issued executive amnesty, and it would be a HUGE mistake if Trump tries to illegally expand amnesty. #TellTheSwampNO #RuleOfLaw https://t.co/RLWuCgcNU6

“You seem laser-focused on deporting DACA,” Balart told the president at one point in the interview, as reported by Raw Story.

The US president's Friday statements on the Supreme Court's ruling come counter to his previous statements regarding the June 18 decision, which blocked Trump's attempt to end DACA, a program that has offered protection from deportation for up to 700,000 migrants.

Do you get the impression that the Supreme Court doesn’t like me?

"These horrible & politically charged decisions coming out of the Supreme Court are shotgun blasts into the face of people that are proud to call themselves Republicans or Conservatives," he argued at the time.