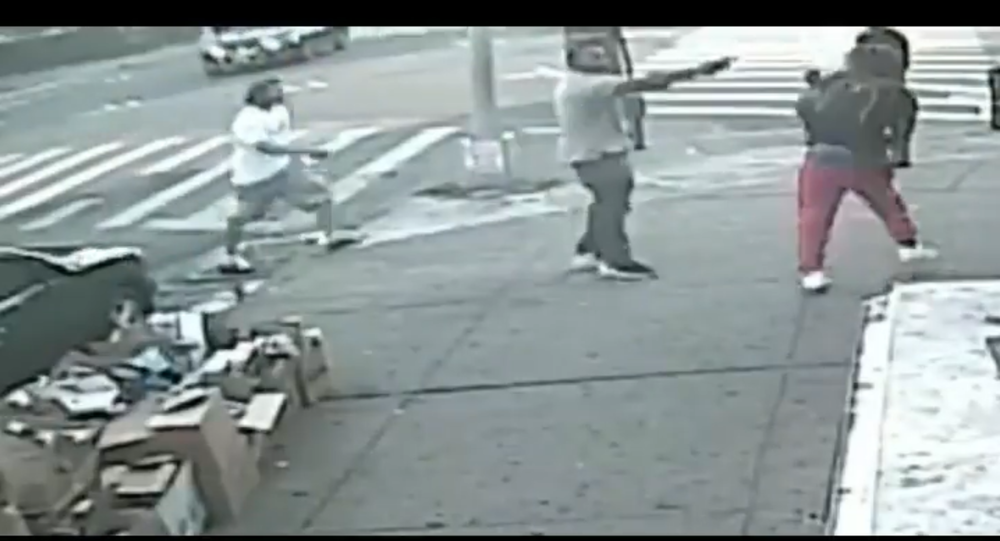 Police said that the shooting, in which a 20-year-old man was killed and a woman was left with several gunshot wounds, took place in front of 41 New Lots Avenue in Brooklyn’s Brownsville neighborhood at around 6:45 p.m. on Thursday.

The New York Police Department is looking for a man who conducted a shooting in broad daylight earlier this week in Brooklyn’s Brownsville neighborhood, in which a male victim was fatally shot in the head and a woman received multiple gunshots and has been severely injured.

Police on Friday released footage of the crime recorded by a surveillance camera in the area. The video features a man with hands in his pockets, calmly approach another man standing on the sidewalk before pulling out a gun and opening fire at the victims. The shooter then turned around and crossed the road after fulfilling the crime.

Another person could be seen in the video approaching the victim with the suspect before the shooting and then calmly leaving the crime scene with him, both with hands in pockets.

“Earlier this morning, police officers from the 73rd Precinct responded to a 911 call of a male and female shot in front of 41 New Lots Avenue. When they arrived, they discovered a male with a gunshot wound to the head and a female with multiple gunshot wounds,” NYPD Chief of Detectives Rodney Harrison captioned the video of the shooting.

Earlier this morning, police officers from the 73rd Precinct responded to a 911 call of a male and female shot in front of 41 New Lots Avenue. When they arrived, they discovered a male with a gunshot wound to the head and a female with multiple gunshot wounds. pic.twitter.com/uXNwmhatsO

The victim was identified as 20-year-old Deondraye Moore. He was pronounced dead soon after being transported to Brookdale Hospital. Another victim, 36-year-old Shaquana Fields, received two gunshots; one in her arm and a second in the chest. She is currently in stable condition, according to New York Daily News.

Derrick Moore, the victim’s father, said that his son was a “good kid”. He added that the victim was a rapper, and was talking to him last week about his growing music career, discussing plans of recording a father-son duet.

“I’m still trying to wrap my head around it. I’m shocked,” Moore said, cited by the NY Daily News. “He wanted me to sing and he would rap. I said ‘I’ll think about it’. I don’t like rap, but I support him”.

The NYPD chief of detectives urged New York residents to provide the department with any information about the shooter in the video.

“The NYPD and the community need to work together as a team to help curb the violence,” Harrison said in a statement on Sunday.

The NYPD and the community need to work together as a team to help curb the violence. #helpushelpyoubesafe

The detective said that shooting reports have increased recently in the city, pointing out that “from midnight last night [Saturday] to 9:00 a.m. this morning [Sunday], there were 21 reported shootings with 37 victims. Out of those 37 victims, three died”.

As shootings throughout NYC continue to rise, news articles like these are becoming a daily occurrence. From midnight last night to 9:00 a.m. this morning, there were 21 reported shootings with 37 victims. Out of those 37 victims, three died. pic.twitter.com/J5xn1w4MRf