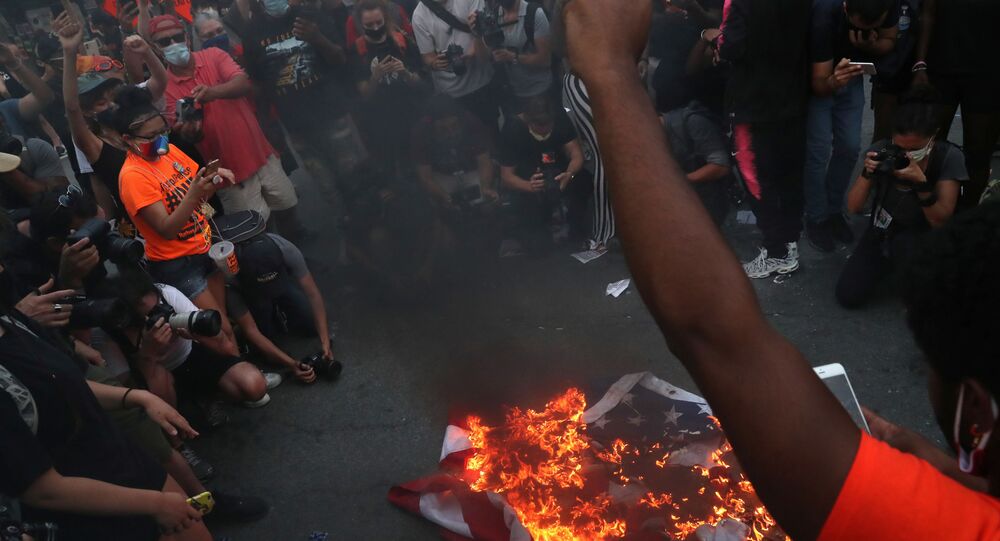 MOSCOW (Sputnik) - Protesters burned a US flag near the White House after US President Donald Trump's Independence Day address, in which he promised to defeat the radical left.

The protesters were chanting "One, two, three, four, slavery, genocide, and war. Five, six, seven, eight, America was never great", as they were burning the flag, The Hill reported on Saturday.

Protesters outside the White House have now set a big American flag on fire while chanting: America was never great! pic.twitter.com/448IPYUR0y

​According to NBC, protesters from the Revolutionary Communist Party first tried to burn several small US flags but ended up setting one larger flag on fire outside Lafayette Square.

Trump said in his 4th of July address at the White House that the US was "in the process of defeating the radical left, the Marxists, the anarchists, the agitators, the looters, and people who in many instances have absolutely no clue what they are doing".

Trump said that the US was going to defend and preserve the American way of life, which started in 1492 when Christopher Columbus discovered America.

"We will never allow an angry mob to tear down our statues, erase our history, indoctrinate our children or trample on our freedoms", Trump said.

A crowd of protesters brought down a Christopher Columbus statue and threw it into Baltimore’s Inner Harbor on the night of the Fourth of July, according to The Baltimore Sun.

Last month Trump signed an executive order on protecting the country's monuments, which have become a major target for protesters during a month of violent clashes and demonstrations following the death of George Floyd, a 46-year-old African American man, in Minneapolis police custody on 25 May.