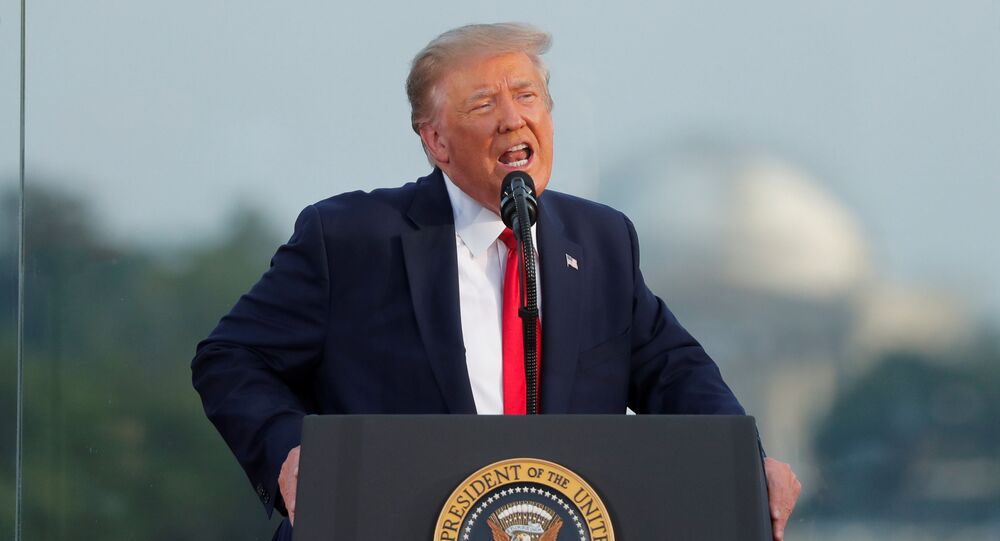 Did He? Twitter Debating Over Whether Trump Believes Operation 'Desert Storm' Was in Vietnam

On Saturday, US President Donald Trump delivered a speech from the White House to mark the 4th of July holiday. At one point in his Independence Day speech, the president spoke about victories achieved by Americans in the past.

Users on Twitter have been left in doubt following US President Donald Trump’s Independence Day speech, as it was not very clear at one point whether the president made a "substantive error".

While remarking about victories by the US military in "battlefields across the world", Trump spoke about the air show, scheduled to start as part of the celebratory event, telling the audience, "We will bear witness to awesome aircraft representing every major military conflict over the last 75 years".

"These planes once launched off massive aircraft carriers in the fiercest battles of World War II. They raced through the skies of Korea’s MiG alley. They carried American warriors into the dense fields and jungles of Vietnam. They delivered a swift and sweeping … It was swift and it was sweeping like nobody’s ever seen anything happen, a victory in Operation Desert Storm", Trump said. "A lot of you were involved in that".

Twitterians divided into two groups, with one claiming that the president thinks Operation Desert Storm, which happened in 1991 during George H.W. Bush's presidency, took place in Vietnam, instead of Iraq.

The other group insisted that Trump was just listing wars in which American troops participated.

"No, he didn’t. He stumbled when trying to say the word 'sweeping' while talking about Desert Storm, but he was just listing wars - he mentioned Vietnam, then, stumbling, mentioned the sweeping victory in Desert Storm. Didn’t make a substantive error', another user wrote.