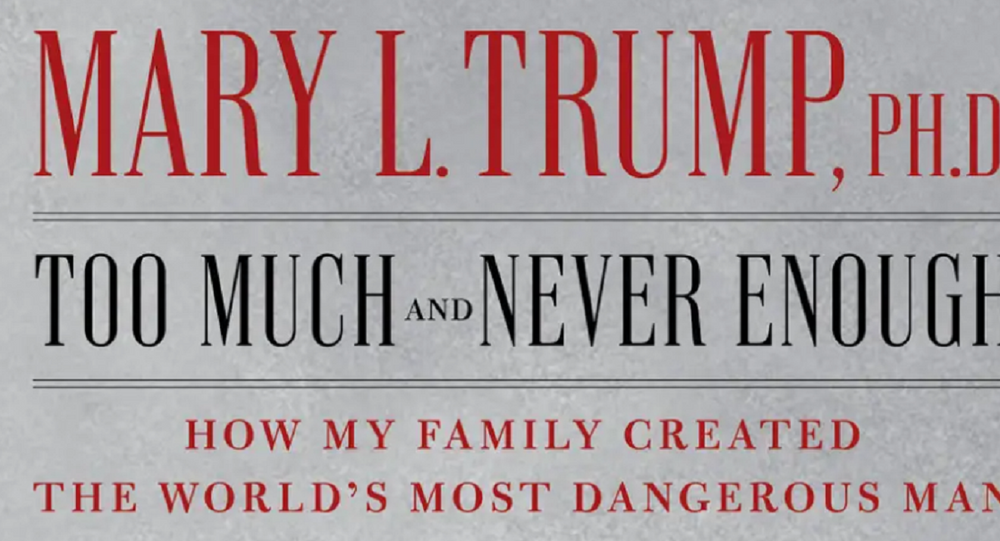 Amid the recent trend of tell-all books on US President Donald Trump, drawing anger and legal gambits by the president to block publications, his niece, Mary Trump, has struggled to avoid legal obstacles set up by members of the Trump family who are complaining about her upcoming tome.

In an attempt to seek a legal path to publish Mary Trump's forthcoming book "Too Much and Never Enough: How My Family Created the World’s Most Dangerous Man", her lawyers now claim, cited by The Guardian, that reports regarding Trump's tax affairs show that the non-disclosure agreement that the Trumps are using as a means of attempting to block the book, is based on “demonstrably fraudulent” financial information and is invalid.

“The New York Times’s detailed analysis and investigation revealed for the first time that the valuations on which I had relied in entering into the settlement agreement, and which were used to determine my compensation under the agreement, were fraudulent. I relied on the false valuations provided to me by my uncles and aunt, and would never have entered into the agreement had I known the true value of the assets involved", Mary Trump testified on Thursday, cited by The Guardian.

Struggling to win the legal fight over the release of the potentially-damning book, her lawyers and publishers cite First Amendment guarantees of free speech - similar to claims made be several Trump advisors and family members to justify what has been reported as hate speech - as the primary argument to publish the book.

In a statement, Simon & Schuster, the publishing house behind the tell-all book written by Trump's former national security adviser, John Bolton, echoed Mary Trump's lawyers, noting that her book is of “great interest and importance to the national discourse that fully deserves to be published for the benefit of the American public”.

“As all know, there are well-established precedents against prior restraint and pre-publication injunctions, and we remain confident that the preliminary injunction will be denied", the statement said.

Mary Trump's book, set to become widely available 28 July, will reveal a “revelatory, authoritative portrait of Donald J Trump and the toxic family that made him”. Pre-press statements for the biography drew quick condemnation and anger from the Trump family, which subsequently made attempts to block the publication of the through the use of the courts.

The book was temporarily blocked by a court on 30 June, but the ban was lifted shortly thereafter, as Simon & Schuster said claimed that they were unaware of a non-disclosure agreement, and observed that 75,000 copies had already been printed. An additional hearing is scheduled for 10 July.

According to representatives for Trump and his family, the book breaches a "non-disclosure agreement" Mary Trump and Fred Trump III entered following a legal battle with the rest of the family after they were excluded from the will of Fred Trump Jr, Donald Trump’s elder brother.