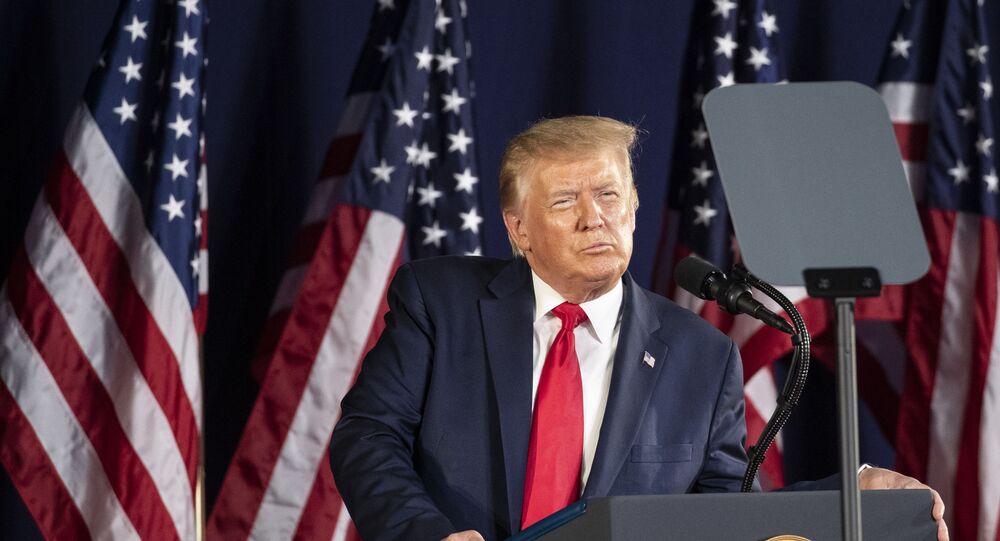 In his high-profile Independence Day speech, President Donald Trump warned against the dangers posed by BLM protesters, frequently dubbed “left-wing fascists”, in light of the recent destruction on the country’s streets and the way many of the demonstrators approach US history.

Many couldn’t hold back their reactions to President Trump’s emotional 4 July address at Mount Rushmore as he famously charged that the ongoing racial justice protests threaten the very foundations of American society. Piers Morgan, the outspoken host of the TV show “Good Morning Britain”, was no exception when he posted a comment to a tweet by fellow journalist Toby Young, who supported Donald Trump’s stance and posted a link to a video of POTUS taking the floor on Friday. In the clip, the president emotionally said "make no mistake", warning his vast audience that "this left-wing cultural revolution is designed to overthrow the American Revolution".

“He’s not[wrong].. and the illiberal woke brigade have once again given Trump a powerful electoral weapon just when he desperately needed one”, Morgan shared his take, referring to the recent BLM protests against racial injustice that have not infrequently devolved into arsons, the defacing of monuments deemed to be related to slave ownership, and other forms of social unrest.

Many more shared the belief that what BLM has shown itself to be about has handed Trump the upcoming election.

“Like he said they are not coming for me, they are coming for you.Clever, clever man”, one posted, with another similarly praising the approach:

“A lot of people got sucked into the BLM protests. Trump is spot on and good to see him protecting American history. In the UK we are just letting BLM take our history away”.

Others likewise expressed their scepticism about the BLM protests’ essence:

“He is not wrong piers [sic] people aren't protesting anymore they are out to rioting and damaging as much as they can. If they get there [sic] way they will burn America to the ground”, one assumed, with another querying:

“Far Left Fascism” Is that a thing?”

Many more reflected on the many acts of vandalism that have hit the US and beyond in the wake of the BLM protests, which were triggered by the death of African-American man George Floyd at the hands of Minnesota police.

United States President Donald Trump railed on Friday against the "angry mobs" that have tried to pull down statues of Confederate leaders and other historical figures, warning thousands of supporters at Mount Rushmore that the protesters were trying to rewrite the country's history and erase its past.

He lamented "cancel culture" and argued that some on the political left are striving to "defame our heroes, erase our values and indoctrinate our children".

The president went on to announce that he would erect a "National Garden of American Heroes", which he described as a large outdoor park housing statues of "the greatest Americans who ever lived".