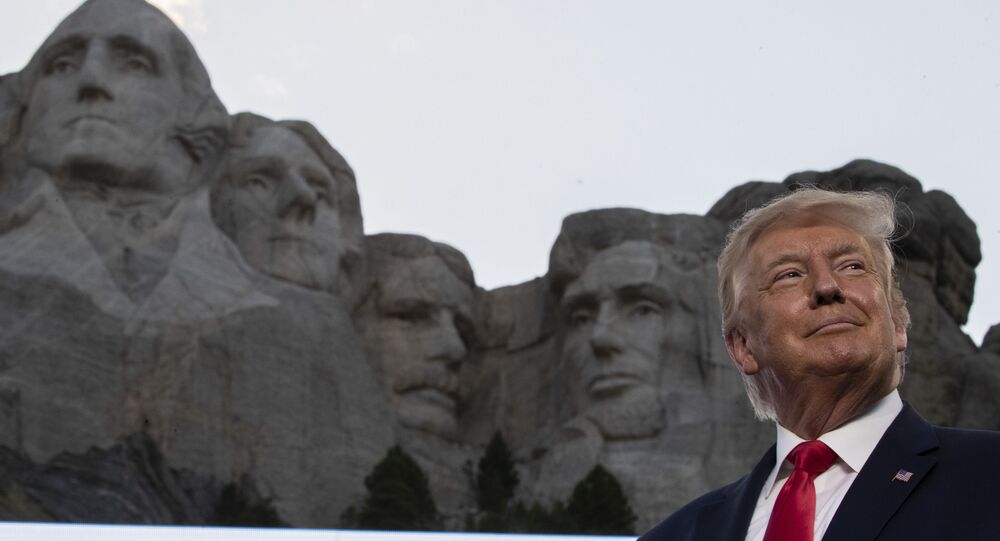 On Friday, a group of mostly Native American protesters blocked the main road to the Mount Rushmore monument in South Dakota ahead of President Donald Trump's appearance in the area for the July 4th celebrations.

Speaking at a pre-Independence Day event near Mount Rushmore in South Dakota, US President Donald Trump blamed George Floyd protesters for waging "a merciless campaign to wipe out our history".

The speech followed weeks of demonstrations against racial injustice and police brutality across the US sparked by the 25 May death of an African American man at the hands of a white policeman in Minneapolis. During the protests, some demonstrators destroyed or damaged Confederate monuments and statues.

"This movement is openly attacking the legacies of every person on Mount Rushmore", Trump said, blaming the movement for seeking to "defame our heroes, erase our values, and indoctrinate our children".

He pledged that the South Dakota memorial would "stand forever as an eternal tribute to our forefathers and to our freedom", adding, "this monument will never be desecrated, these heroes will never be defaced".

POTUS also said that "those who seek to erase our heritage want Americans to forget our pride and our great dignity, so that we can no longer understand ourselves or America's destiny".

"They would tear down the beliefs, culture, and identity that have made America the most vibrant and tolerant society in the history of the Earth", Trump noted, adding that the attack on the nation's "magnificent liberty" must be halted "very quickly".

He singled out American schools, newsrooms, and corporate boardrooms, where Trump said "there is a new far-left fascism that demands absolute allegiance".

"If you do not speak its language, perform its rituals, recite its mantras, and follow its commandments, then you will be censored, banished, blacklisted, persecuted, and punished. […] Make no mistake, this left-wing cultural revolution is designed to overthrow the American Revolution", he emphasised.

Slamming the toppling of monuments during the George Floyd protests, Trump argued that "one of their [protesters’] political weapons is cancel culture", and that their actions can be likened to "totalitarianism".

POTUS warned that those who damage "symbols of national heritage" would face "the fullest extent of the law", referring to a recent executive order on protecting monuments that he recently signed. The order stipulates that those who target statues could be sentenced to 10 years in prison.

"The left-wing mob and those practising cancel culture are engaging in totalitarian behaviour that is completely alien to American life - and we must not accept it", Trump underlined.

In the run-up to Trump's appearance near Mount Rushmore, a group of mostly Native American protesters blocked the main highway in South Dakota leading to the monument.

LIVE FOOTAGE FROM THE MOUNT RUSHMORE PROTESTS, POLICE ARE PREPARING TO GAS:https://t.co/LPKU3hxy54

Demonstrators were reportedly seen gathering about three hours before Trump's speech, prompting warnings from the authorities for them to clear the way.

This was followed by local police officers launching smoke bombs into the protesting crowd to try to disperse them.

Indigenous protesters at Mount Rushmore (sacred Lakota land) have removed the tires from the large white vans in the background, creating a road block that will be very difficult to move.

The protests came as leaders of several Native American tribes in the region expressed alarm that the pre-Independence Day event could result in virus outbreaks among the tribes’ members.

Harold Frazier, chairman of the Cheyenne River Sioux tribe, said that "The president is putting our tribal members at risk to stage a photo op at one of our most sacred sites".

Some indigenous groups used Trump's visit to protest the Mount Rushmore memorial itself, insisting that the Black Hills, where the monument is located, were taken from the native Lakota people.

Over 100 protesters, mainly Lakota, lined the road leading from Keystone to the monument as they held signs reading "You Are on Stolen Land" and "Dismantle White Supremacy".

"The president needs to open his eyes. We're people, too, and it was our land first", Hehakaho Waste, a spiritual leader from the Oglala Sioux tribe was cited as saying during the rally.