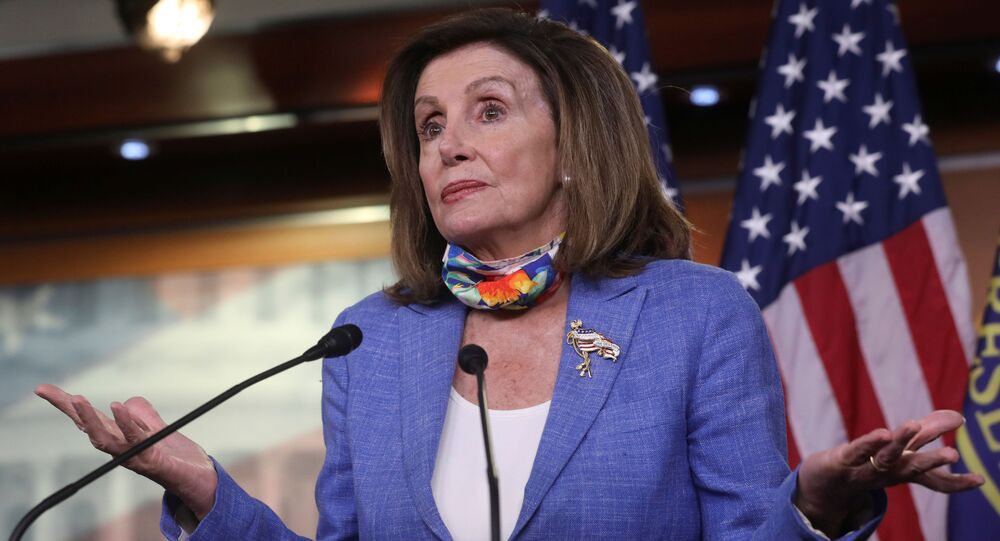 ‘Save the World’: Twitter ‘Shocked’ as Pelosi Responds to McCarthy Criticizing Her Silence Over Riot

On Wednesday, US House of Representatives Minority Leader Kevin McCarthy criticized the Speaker of the House, Nancy Pelosi, for her “refusal to condemn tearing down” a Golden Gate Park statue of Father Junipero Serra by demonstrators in San Francisco, California – in Pelosi’s district, and called on the Democratic lawmaker to “break her silence”.

US Speaker of the House Nancy Pelosi fired back at the Minority Leader Kevin McCarthy for his criticism of her for not commenting on statue of Father Junipero Serra being knocked down by protesters on 19 June, in her district of California, commenting that she has been busy “trying to save the world from coronavirus”.

“I'm trying to save the world from coronavirus,” Pelosi said in a statement to the Washington Examiner. “I have no interest in McCarthy, who hasn't had the faintest idea of our dynamic in our district”.

The Speaker commented on vandalism of statues across the country during the wave of anti-racism and anti-police-brutality protests across the United States, saying the nation should review statues and decide whether which should be removed and do so “carefully”.

“I think we should all review the statues and make decisions. I do agree they should come down more carefully,” Pelosi said.

On Wednesday, McCarthy issued a statement criticizing his colleague in the House for remaining “uncharacteristically silent” as the statue of Father Junipero Serra, an 18th century Franciscan priest who founded Spanish missions in California, was destroyed by “a violent leftwing mob”.

“Given that today is the Feast Day of Saint Junipero Serra, her condemnation of mob violence would be especially timely,” McCarthy suggested. “Today should be a day for celebration. Instead, we’ve recently seen a violent leftwing mob tear down the statue of St. Serra in Speaker Pelosi’s district in San Francisco, California."

Netizens on Twitter claimed that they were “shocked” after Pelosi remarked that she was busy “trying to save the world from coronavirus” as, in their estimation, it was a move “to avoid the question” about the statue.

Oh look she deflected to a totally unrelated topic to avoid the question.

World needs to be saved from her

She's right. Government and law enforcement don't have time for such nonsense.

Asked to condemn those tearing down statues, House Speaker Nancy Pelosi snapped: "I'm trying to save the world from coronavirus!"

RT if you'd rather be saved from Pelosi! 😂

“You wasn't interested in the virus when you were telling people to come out in the streets and join the festivities without mask of course. You were in a big crowd, I'm sure glad I don't have to count on you!!” someone wrote.

@SpeakerPelosi “I’m trying to save the world from coronavirus,” You wasn't interested in the virus when you were telling people to come out in the streets and join the festivities without mask of course. You were in a big crowd, I'm sure glad I don't have to count on you!!

@SpeakerPelosi So funny. You’re trying to save the world from the corona virus! You didn’t save the statue of Saint Serra and you encouraged the spread of the virus by encouraging all the protestors who endangered millions of citizens because of their lack of social distancing.

@SpeakerPelosi trying to save the world from coronavirus is the funniest thing I’ve heard all week.

@SpeakerPelosi Wow Nazi Pelosi says "I'm trying to save the world from coronavirus' What an admirable goal for one old woman who can barely keep her dentures in her mouth. But who is going to save us from her?

The ongoing wave of protests in the US, as well as many countries around the world, was triggered by the death of African-American George Floyd at the hands of white police officers in Minneapolis, Minnesota, in late-May.

On Thursday, coronavirus-related infection cases in the United States surged over 50,000, a record daily increase for the third day in a row, making a total of over 2.73 million infections with 128,742 dead.