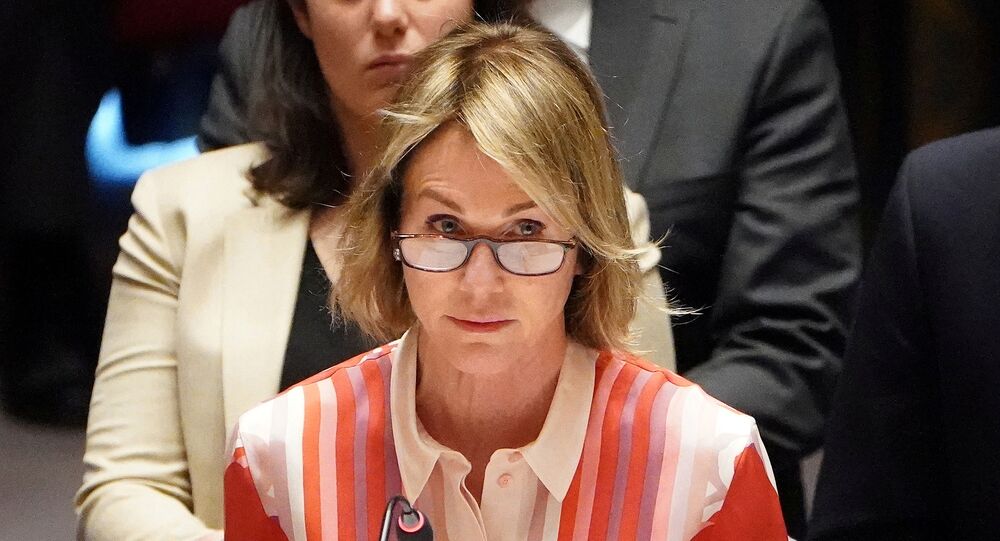 A UN resolution adopted in January envisaged a reduction of border crossings under a program of cross-border humanitarian aid to Syria, from four to two, as the Assad government regained control over the country's territory and made possible aid delivery from inside Syria.

The US ambassador to the United Nations, Kelly Craft, asserted that a failure to extend a cross-border aid program in Syria will result in "mass graves" in the country, and claimed that the lack of border crossings would restrict access to Syrians in need of humanitarian supplies amid the coronavirus pandemic.

“What we’re really focused on in the Council is the outcome, and that is saving lives, that’s reaching over 4 million Syrians. And if we don’t, the COVID outbreak is going to… I hate to say this... it’s going to be mass graves of very innocent people,” Craft said in an interview with Fox News.

Currently, the World Health Organization (WHO) shows that there are 293 registered cases and 9 related deaths for over 17 million people living in the country.

She implied that in order to "reach" over a million people in Syria in need of medical supplies it is vital to increase the number of border crossings to three, pointing at Russia as "the main opposition".

“It’s the only way… we’re going to be able to reach the northeast, that’s about 1.3 million people who are waiting on medical supplies", she said.

Despite Craft attempting to expose Russia as obstructing "saving lives", Moscow has insisted since January - when the resolution extending the aid program up to 6 months and limiting the number of check points to two was adopted in the UN - that humanitarian aid must delivered in coordination and respect to the recipient country and its sovereignty. It was also pointed out that the cross-border program in 2014 was adopted as a "temporary and emergency measure", before the Syrian government regained control over its territories and provided access to them from inside Syria.

"As a reminder, the cross-border delivery of humanitarian aid to Syria in 2014 was launched as a temporary and emergency measure. We believe that after the expiration of UN Security Council Resolution 2504 on July 10, 2020, humanitarian assistance to the Syrians should be carried out in coordination with Damascus, as provided for in international humanitarian law", a Russian Foreign Ministry statement said.

© AP Photo / Muzaffar Salman, File
In this Oct. 12, 2011 file photo, supporters of the Syrian government hold a pro-Russian banner to show their support for President Bashar Assad and to thank Russia and China for blocking a U.N. Security Council resolution condemning Syria for its brutal crackdown, during a demonstration in Damascus, Syria.

The Russian ambassador to the United Nations, Vasily Nebenzia, outlined that Resolution 2165 adopted in 2014 was in fact a "deviation" from the "fundamental principles of humanitarian assistance" imposed to help those in need.

In that statement, Nebenzia stressed that the present situation shows that only Idlib province residents need help, and the crossings that allow them aid were left in place by the January resolution. He reiterated the necessity of providing humanitarian aid "at the request and with the consent of the recipient country".

At a February meeting of the UN Security Council, a Syrian representative outlined the possibility of alternative routes for the delivery of humanitarian aid are based on "consultations with the Government of Syria".

"Delivery to the north-east is viable from within Syria’s borders without politicizing aid or allowing Turkey to use the crossings mentioned in resolution 2504 (2020) as entry points for its troops", the Syrian representative said.

A cross-border humanitarian aid program, started in 2014, was renewed by the UN in January with the adoption of Resolution 2504, which reduced the number of border crossings, dropping the Al-Yarubiyah border crossing with Iraq and the Al-Ramtha crossing with Jordan. The reduction of crossing drew criticism from Western countries claiming it would cause a lack of medical supplies in Syria, particularly amid the coronavirus pandemic.

Syria has been engaged in a civil war since 2011, as legitimate President Bashar Assad's government faced attacks from several opposition groups, and militant and terrorist organisations including Daesh*.

*Daesh - a terrorist organisation outlawed in Russia and many other countries