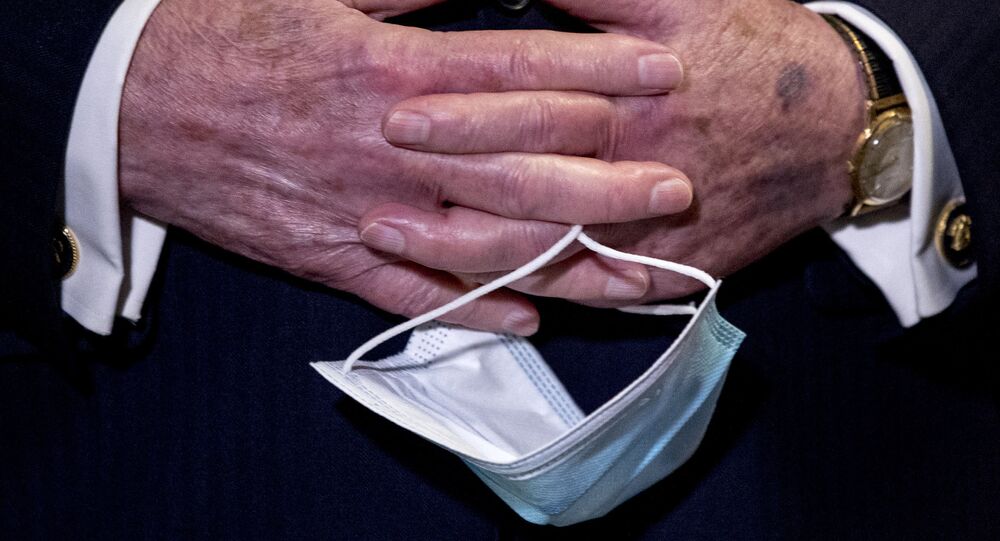 Trump Says He’s 'All for Masks', Looks Like 'Lone Ranger' When Wearing One

Twenty American states require people to wear masks and face coverings when out in public, but there is no national mask mandate, and some Democrats and Republicans are calling for one to be put in place.

US President Donald Trump has cast doubt on the idea of a mandatory nationwide policy for wearing face masks in public places as coronavirus surges are on the rise.

"I don't know if you need mandatory, because you have many places in the country where people stay very long distance. You talk about social distancing. But I'm all for masks", Trump said in an interview with Fox’s Blake Burman on Wednesday.

Trump, who has been criticised during the pandemic for his habit of not wearing a mask, said he would "have no problem" with using one. He explained the reason he doesn’t wear them is because everyone who comes into contact with him gets tested in advance.

"Actually, I had a mask on. I sort of liked the way I looked, OK? I thought it was OK", Trump said. "It was a dark, black mask, and I thought it looked OK. Looked like the Lone Ranger. But, no, I have no problem with that. I think – and if people feel good about it, they should do it".

There is no federal policy on wearing masks when venturing out, yet 20 states including California and New York have enacted their own guidelines requiring people to use face coverings everywhere in public where social distancing isn’t possible. In some areas, like Louisiana or DC, face masks are only mandatory for staff at businesses.

A growing body of research suggests that wearing a cloth mask is the most effective way to prevent person-to-person spread of the coronavirus. Both the CDC and the WHO currently recommend face masks for the general public, although both organisations said just the opposite early on in the pandemic before evidence of face coverings emerged.

A University of Washington model last week projected that 33,000 deaths could be prevented by 1 October if 95 percent of Americans wore masks outside their homes. And according to Goldman Sachs estimates, a national mask mandate could save the US almost 5 percent of GDP.

"When you do not wear your face covering, we end up in a situation where you see higher rates of disease spread and you end up having to close places", Surgeon General Jerome Adams cautioned at a Tuesday briefing. "This mask, this face covering, actually is an instrument of freedom for Americans if we all use it".

The calls for such an order have been growing as states begin to lift months-long lockdowns and cases began rising again in half of them.

Nancy Pelosi, the nation’s top Democrat, said on Sunday that a federal mask mandate is "long overdue". Would-be Democratic presidential candidate Joe Biden said he "would insist that everybody in public be wearing that mask".

The issue of whether or not to wear a mask has been politicised, although Donald Trump has come under pressure from within his own party to set an example.

"Unfortunately, this simple, lifesaving practice has become part of a political debate that says: If you're for Trump, you don't wear a mask. If you're against Trump, you do", said Lamar Alexander, a Republican senator from Tennessee.

Vice President Mike Pence and Senate Majority Leader Mitch McConnell in recent days have also urged Americans to wear one if they are unable to maintain social distance.