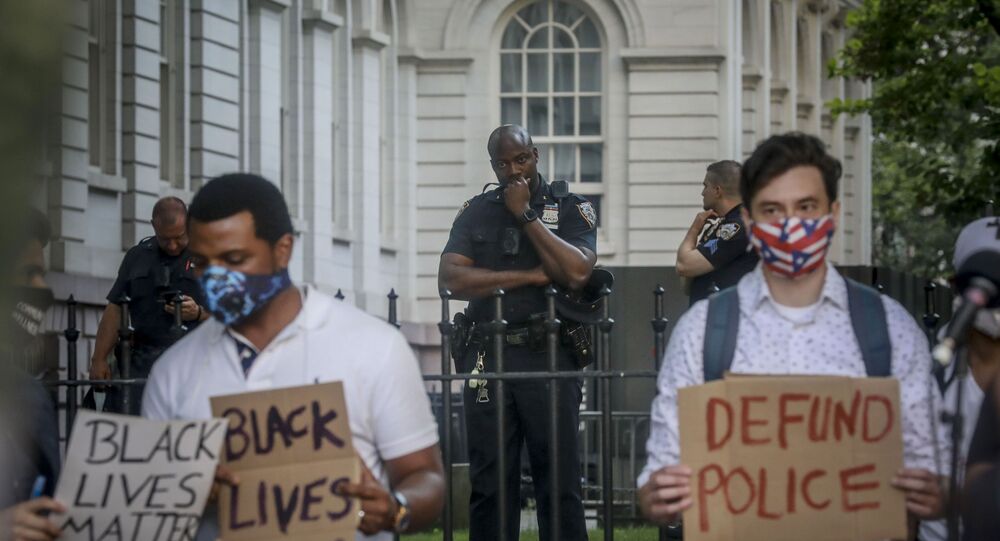 New York authorities this week slashed the city police department’s budget by over 16 percent, as anti-police sentiment has grown over the in-custody death of George Floyd and other police killings. Observers are worried that pressure from activists has outweighed input from experts in making the decision.

The just-announced overhaul of the NYPD budget may lead to a new spike in violence because of authorities’ failure to take into account officers’ psychology, a former cop says.

Elected officials have failed to realise the importance of morale for police officers, says Porcher, who had spent 20 years with the department: “When officers function on high morale, they are more proactive and focused on serving the community which drives empathy in policing. When police provide services because they have to, the results are not as fruitful.”

Porcher cites what happened in Seattle, where six people have been killed or wounded in four shootings in the past 12 days in the police-free ‘Chop’ protest zone.

What’s the NYPD reform about?

New York City is also expected to see less officers in the not-too-distant future. The city council on Tuesday cut the NYPD budget by $1 billion, over 16 percent of what it spent last year. That money will be diverted to youth, family and social-services programmes with the goal of addressing the root causes of crime.

Meanwhile, resignations by cops in New York have spiked since the in-custody death of George Floyd on 25 May, which set off mass protests against police brutality. Shootings have also been on the rise late last month.

“The pool of potential police recruits is dwindling daily which presents a problem for the future of public safety,” says Dr Porcher. “It is of optimum importance that we continue to train new recruits to satisfy the attrition rate. As an elected official it’s essential that you focus on satisfying the morale of police in order to maximise the outcome of police service.”

Hopes for less violence are ‘naïve’

Although polls appear to show that the majority of New Yorkers do not support the budget cuts, authorities caved in after four weeks of marches in support of police reform. The concept has been around for years, particularly after the 2014 unrest in Ferguson, but the George Floyd incident brought the campaign for defunding the police to a nationwide level.

Minneapolis, where Floyd was killed, has pledged to disband its police force outright, and less radical reforms are being implemented in some other cities including Los Angeles, Seattle and Newark.

“The major problem with what is happening right now with regard to the calls for police reforms and defunding is that people who are the true experts on the police profession and organisation are not included in these discussions,” laments Professor Maria Haberfeld, who leads the NYPD police studies programme at New York’s John Jay College of Criminal Justice.

“When it comes to NYC, it took decades of very hard work to bring the crime, especially the violent crime, down to a manageable level and now within a few weeks all this progress will be destroyed,” she says. “Furthermore, this destruction will be based on emotions, feelings and beliefs of various stakeholders rather than on a sound empirical research and best practices.”

Although police coverage is not the only factor at play related to crime levels, Prof Haberfeld suggests that unemployment, anti-police sentiment, and the imploding reform of the criminal justice system, coupled with police defunding, will lead to “more violent crime, especially violent street crime”.

“Allocating money to other programmes might be beneficial for some but will not cure the violence problem in NYC and it is beyond naive to think that it will,” she believes. “Again, I will close with the same thought that I started with, transformational changes to a given profession should be based on input from the experts and not on caving in to pressures from the emotional and, mostly, uniformed crowds.”