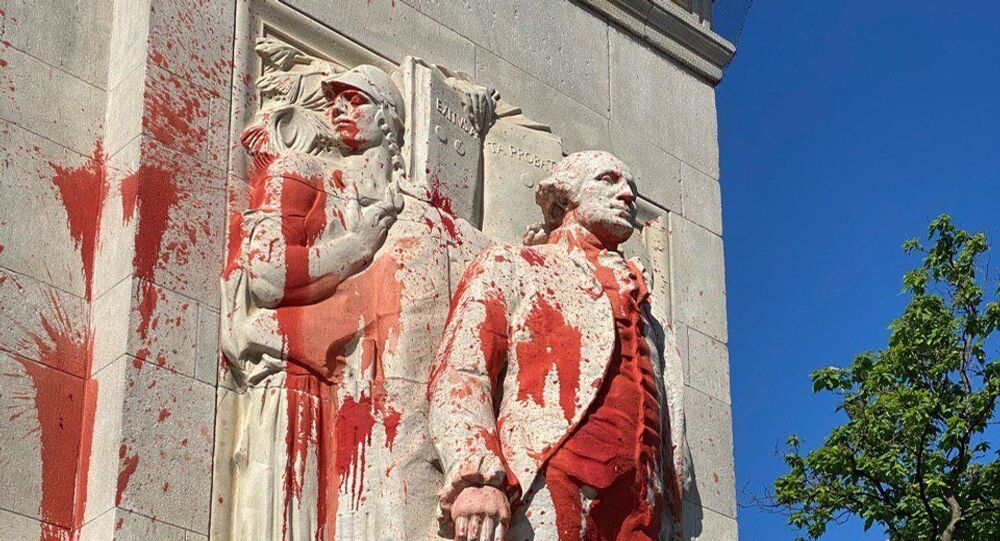 Local media reported the defacing of George Washington monuments in Manhattan earlier on Monday, adding that vandals had been spotted on surveillance video hurling red paint at the statue.

In his Twitter account, Trump denounced "the two Anarchists" who threw paint on a monument of George Washington in Manhattan, urging them to turn themselves in and warning that they are being tracked. The president referred to the "Monuments and Statues Act", an executive order protecting national monuments that he signed on Friday, warning that the vandals, if caught, could face 10 years in prison.

“We are tracking down the two Anarchists who threw paint on the magnificent George Washington Statue in Manhattan. We have them on tape,” Trump tweeted. “They will be prosecuted and face 10 years in Prison based on the Monuments and Statues Act. Turn yourselves in now!”.

We are tracking down the two Anarchists who threw paint on the magnificent George Washington Statue in Manhattan. We have them on tape. They will be prosecuted and face 10 years in Prison based on the Monuments and Statues Act. Turn yourselves in now!

​On Monday, local media reported that two George Washington statues were defaced with red paint. The vandals, a man and a woman, according to the New York Post, were caught on surveillance footage hurling paint-filled balloons at the statues.

New York, US
A member of the monuments and conservation department power cleans up a statue of George Washington after it was vandalised in Washington Square Park

​Social media users shared photos that show that the paint has been apparently already been removed from the statues. City Parks Department workers, however, insist that the statue was damaged by the act.

“This does do damage — you can see bits of the statue all over me,’’ a worker told New York Post while his third round of cleaning the statue. "It’s marble — it comes off,’’ he said.

​On Friday, Trump signed an executive order to protect the country’s monuments, some of which have become major targets for protesters during a month of anti-police-brutality and anti-racism demonstrations - some violent - following the death of George Floyd, a 46-year old black man, at the hands of white police in Minneapolis, Minnesota, on 25 May.