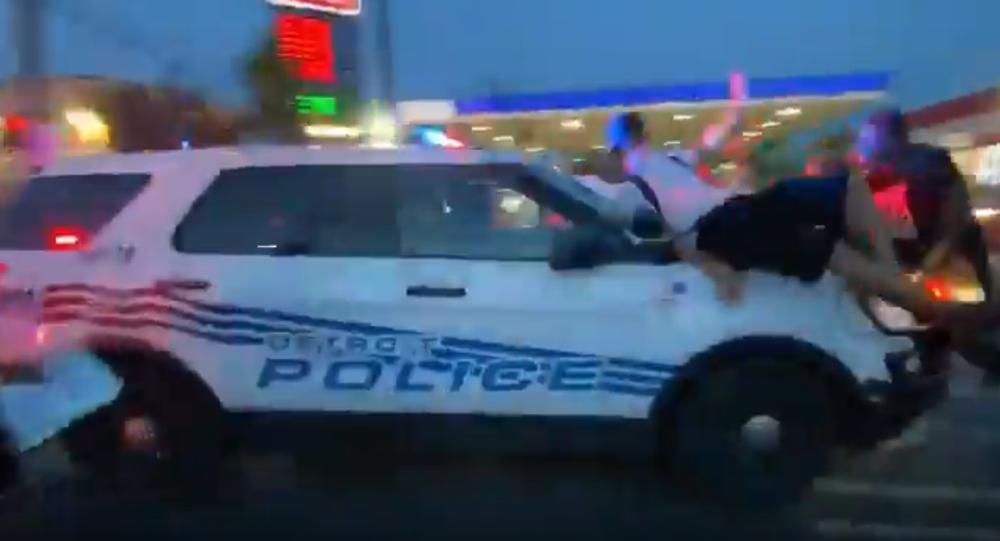 The Detroit Police Chief is defending the actions of his department and said a cop “did the right thing” after the officer was seen on camera slowly driving into a group of protesters in southwest Detroit, Michigan, before then accelerating to 25 miles per hour and injuring several unarmed individuals.

The Sunday night interaction between several protesters and an officer with the Detroit Police Department is now under investigation, according to Detroit Police Chief James Craig, who held a news conference on Monday defending the cop’s actions.

This came about after his officers were accused of provoking and then escalating violence as protesters were trying to assemble in Detroit’s Patton Park.

Multiple angles of the scene were posted to social media.

According to the Detroit Free Press, the demonstration in southwest Detroit began as a peaceful mass protest, comprising groups such as Detroit Will Breathe, By Any Means Necessary, ACCESS and the Detroit Hispanic Development Corporation.

Protesters were observed calling for action on a number of issues, including the abolishment of US Immigration and Customs Enforcement, justice for Breonna Taylor and police reform.

Jae Bass, a 24-year-old Detroiter, was one of the demonstrators thrown off the hood of the police-marked SUV. He explained to the outlet that he was attempting to lead fellow demonstrators through the roadblock on Vernor Highway and to Patton Park and moved in front of the vehicle, hoping to prevent it from hitting pedestrians.

"In response to that, he just floored it," Bass told the Free Press. "He went super fast. Me and a couple of other organizers that were with me, just went flinging off. We went flying off. He ran over a couple people's arms, feet. He ran over her phone. I think I was the last person on the car. I was just holding onto the car. I could feel him speeding up and then he did one of these and he flinged me off the car."

The protester argued that the recent nationwide demonstrations, although mostly peaceful, have cops on edge, ready to flex their authority.

"What you're seeing is us taking control back as the people, and showing exactly what our needs are," he said. "I think police haven't seen that in a while, so they don't know how to control that."

The police chief claimed Monday that the officer “did the right thing” by accelerating to 25 mph through the crowd around the vehicle, as “they believed they could be shot at.”

“What would you have them do?” Craig asked reporters, noting that the officers have not faced any punishment for the interaction and remain on duty.

An unnamed protester told Click on Detroit that the city’s police force “feels like they could do anything with impunity.”

Many netizens have likened the cops’ conduct to that of white nationalist James Fields Jr., who drove his Dodge Challenger through a group of demonstrators counter-protesting against the infamous 2017 Unite the Right rally in downtown Charlottesville, Virginia.