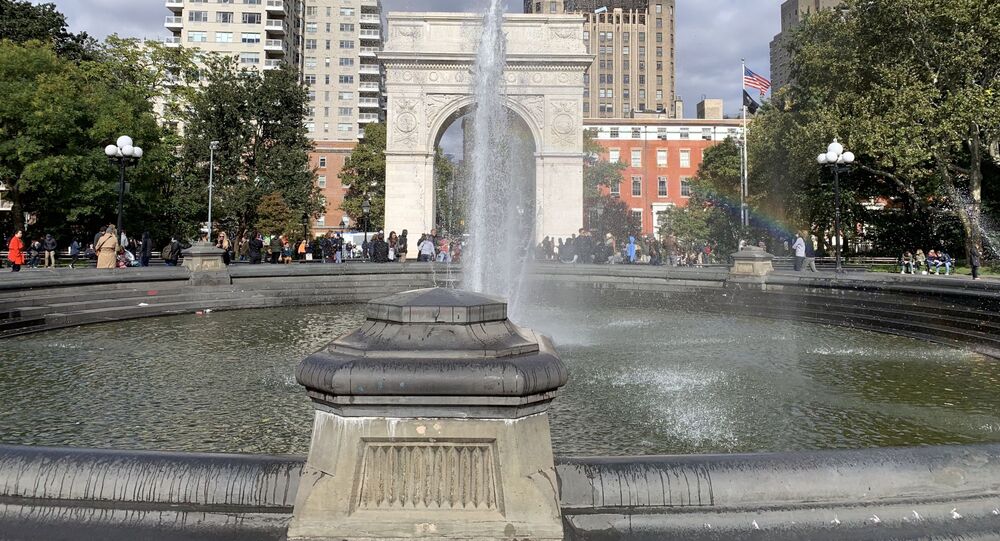 The man, who appears to be peaceful despite his mental issues, has been living in the park since May, according to his own words. New York’s homeless outreach officials have failed to remove the preacher, despite complaints from local residents.

A homeless man who claims to be a manifestation of Jesus Christ has settled in the famous fountain in New York City’s Washington Square Park and turned it into an “altar to God”, the New York Post reports.

The squatter was photographed on Saturday taking a (completely) naked shower in the rain undeterred; he was later seen covering himself with a sarong as officials looked on from beyond the fence.

​He has been identified as Matthew Mishefski, 25, who comes from Pennsylvania and has been living in New York since 2017.

Mishefski, who calls himself the “Son of God Lord Saviour Jesus Christ”, says he has been living in the drained fountain since May. His makeshift home includes a table, several chairs, a recliner, a box of clothes, and a beach umbrella. The man has been rambling - sometimes obscene - prayers at passers-by.

Mishefski told the NY Post that he has autism and has checked into psychiatric wards multiple times. He also said that he had been going in and out of city shelters until November 2017, but chose to live on the streets because it was safer there.

“People bring in knives, weapons, they say they’re going to hurt you if you say something they don’t like, if you look at them”, he recounted. “I had a staff member pull a knife on me”.

City authorities, including NYPD officers and homeless outreach workers, have tried to convince Mishefski to leave his makeshift shrine after numerous 311 calls, but he declined. Homelessness in New York City is not a crime, and the Department of Homeless Services explained that he cannot be removed forcibly because he is not presenting a risk to himself or others or breaking the law.

However, the living “Jesus” was reportedly arrested earlier this month and charged with criminal trespass and failure to comply with signs. He was released without bail, pending trial on 14 September, according to the NY Post.