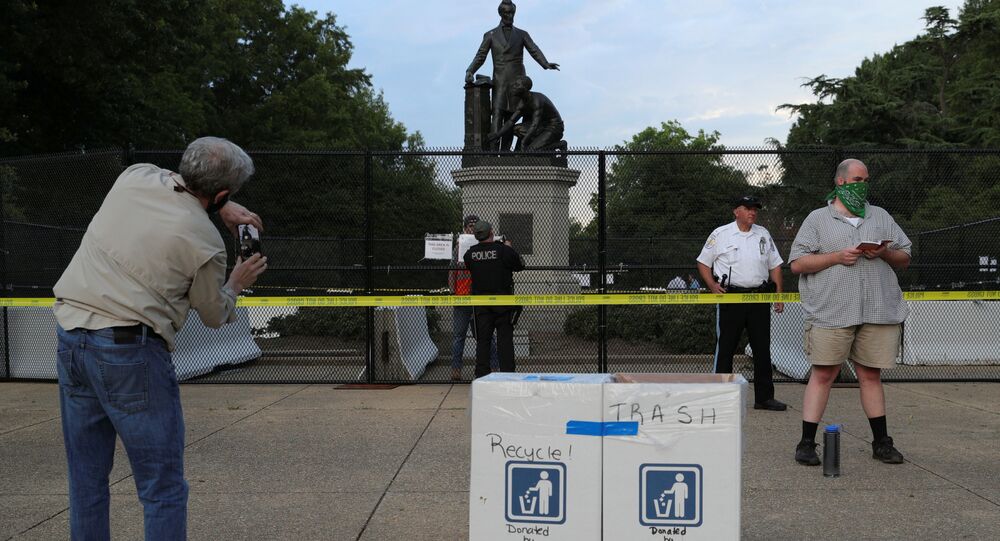 Washington's Emancipation Memorial Fenced Off for Protection From Anti-Racism Activists

MOSCOW (Sputnik) - The US police have installed fencing around the Emancipation Memorial in Washington's Lincoln Park, following anti-racism protesters' calls to remove the monument, which includes a depiction of an African American slave, media reported.

The monument depicts 16th US President Abraham Lincoln holding a copy of his Emancipation Proclamation freeing a male African American slave, who is shown on one knee at the president's feet.

According to the Washington Post, protesters announced plans to gather near the memorial on Thursday and Friday evening, however it is not known whether the demonstrators were going to hold a rally near the statute or demolish the monument.

Apparently the attempt to take down the Emancipation Memorial has been moved to tomorrow, according to reports.

Police are currently out here putting up fencing around the statues in the park: pic.twitter.com/6WCpIHZxbt

​Critics say the Emancipation Memorial offends the dignity of African Americans and downgrades their contributions to liberation from slavery.

The Wall Street Journal reported, citing the US National Park Service, that the area near the memorial will be closed until the end of July and possibly for a longer period. This is done to prevent vandalism and destruction, as well as due to a threat to public safety, the publication said.

A fence has been set up around the Emancipation memorial in Lincoln Park after protesters threatened to tear it down today at a rally on Tuesday. pic.twitter.com/NspOTSkV3X

​On Wednesday, US President Donald Trump said he would issue an executive order to protect monuments and statues in the United States against vandalism by the end of the week. He made his comment in light of recent weeks of civil unrest — and riots — during which protesters have vandalised and, in some cases, destroyed monuments of America's historical figures.

Statues and monuments commemorating individuals linked to racism or slavery have become a target for protesters, who have been demonstrating against racial inequality in the wake of George Floyd’s death on 25 May.