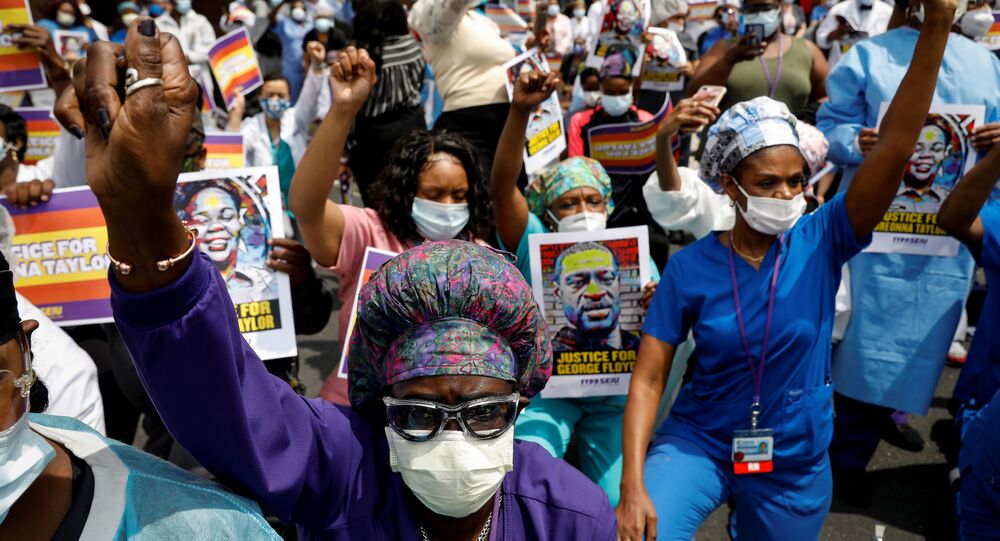 Back to All Lives Matter? People of Colour No Longer Exempt From Wearing Masks in Oregon County

The exemption from the general rule introduced to ensure the safety of all residents came as an apparent concession in the wake of the ongoing George Floyd and Black Lives Matter protests, which have been rocking the entire US since the end of May.

Lincoln County of Oregon has rolled back an exemption it made to the rules for wearing protective masks for people of colour, once again requiring them to wear one outside and indoors in public places – something that was originally introduced as a measure to prevent new COVID-19 infections.

The exemption was introduced back on 17 June by the local health authorities as an attempt to "protect" people of colour, who could allegedly face discrimination when wearing face covers, despite the fact that the pandemic in the US still continues. The official statement by the Lincoln County Board of Commissioners made no secret as to why this exception was being made only now after they had required masks to be worn by anyone leaving their home for the previous two months – it came in response to the countrywide George Floyd protests.

"We included the last protection for those within our communities of colour who historically, and often personally, found themselves the victims of harassment and violence. After last month’s protests, the national attention given to issues of racism, police tactics and inequity, we felt this last exception would be embraced and understood as a small effort to start addressing the realities some of our neighbours deal with on a daily basis", the statement read.

But what was introduced as a measure to prevent racial attacks on minorities ended up being their catalyst – the county faced a storm of what it called "unprecedented […] horrifically racist commentary". The County Board of Commissioners admitted that the very policy "meant to protect" people of colour actually made them a target for "further discrimination and harassment", forcing some black communities themselves to ask for the previous policy to be restored.

The board condemned the people of the predominantly (90%) white country for creating a "ripple of fear throughout [local] communities of colour" and called on them to give up their concerns for their own rights and instead think about the lives of people from racial minority groups.

"We would encourage you to think less about the possibility of your rights being violated and think instead of the heightened feelings of risk that people of colour in your neighbourhoods daily endure", Lincoln County Board of Commissioners said in the statement.

The initial directive prescribing anyone, with the exception of those with specific medical conditions and children, to wear masks was introduced to hinder the spread of the coronavirus pandemic in the US. Yet, taking into account not only health but also discrimination and racism factors is something that localities need to consider when making decisions about public health, Dr. Meena Bose, a political science professor and director of the Kalikow Centre for the Study of the American Presidency at Hofstra University, believes.

"In this case, the county and state have now decided that the medical considerations are the primary reason for wearing face coverings in indoor public settings, with attentiveness to ensuring the directive does not present problems of discrimination or racism for residents", Bose adds.

However, not all people find such an approach to be the correct one in a pandemic situation and even question its honesty. Thomas Lifson, editor and publisher of the American Thinker, suggests that the decision to exempt people of colour from wearing masks was introduced by "guilt-ridden government officials" under pressure from the "mob" of protesters in the community, thus "violating previously sacred principles".

"The Constitution and basic concepts of justice are out the window, and we face a grim new normal in which "getting whitey" becomes acceptable behaviour from governments", Lifson argues.