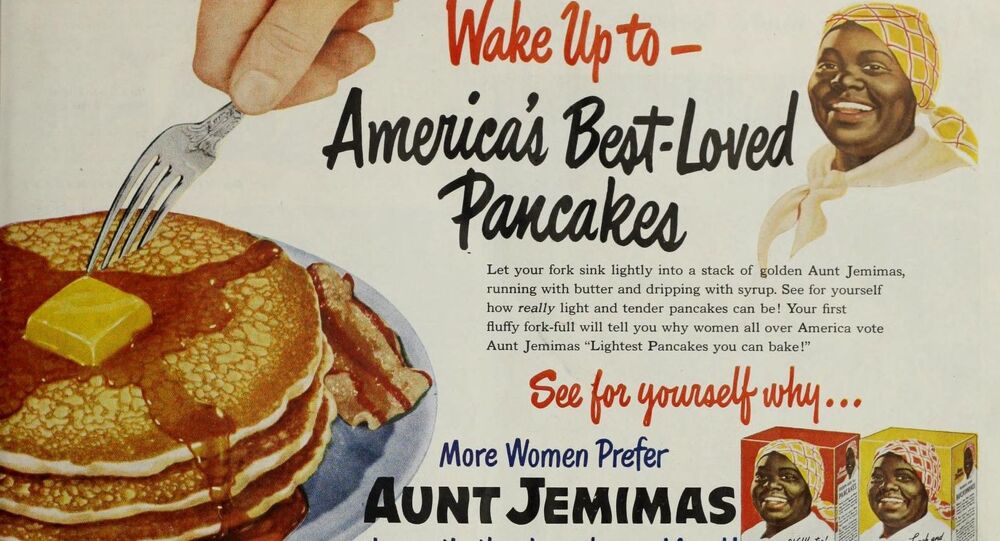 Black Shall Not Pass? African-Americans Vanish From Brand Images, but Flood Media Covers

This month’s mass corporate reckoning has led to quite a few changes in well-established brand imagery, but critics say that although the moves are hardly unexpected, they are not sufficient to tackle racial injustice.

June 2020 will go down in history not merely as the month that ushered in the easing of the nearly three-month global coronavirus lockdowns, but a time that saw American industries ditch decades-long promo logos that have been linked to racial injustice and slavery, or simply hinted at it.

To name just a few examples, history’s broom has over the past few weeks dealt with symbols deemed as racist such as the Aunt Jemima pancake mix brand, or imagery connected with such iconic products as Uncle Ben’s rice, Mrs Butterworth’s syrup, and Cream of Wheat porridge. As part of the all-encompassing corporate reckoning that experts say has long and inevitably been looming, the said imagery is currently being reviewed and changed, according to the companies that own the brands.

“Better late than never, but these images have caused a lot of damage for a long period of time, and that should not be forgotten”, said Todd Boyd, professor of race and pop culture at the University of Southern California, about the pervasive brooming triggered by the death of an African-American man at the hands of Minneapolis police late last month.

The subsequent nationwide protests and resulting waves ultimately reached American businesses, with some, mostly White, customers wondering what breakfast food has to do with any of this. The proponents of the rebranding believe that “everything” does, as the US media put it.

The images on the packaging of Uncle Ben’s, Aunt Jemima, Cream of Wheat, and Mrs Butterworth’s are all believed to be variations of a Black cook or “mammy” - a racially charged theme corresponding to the power dynamic during the Civil War, of the slave-trading antebellum South and the Jim Crow segregation that replaced it. This was when Black slaves worked for White owners and were forced to remain in their segregated places, while the White ruling class assumed they were content with this.

Along with “mammy” Jemima, among other examples are the image of the cook Rastus on Cream of Wheat packages, with the name Rastus having been used as a disparaging term for African-Americans since the late 19th century.

“When you open that box in the morning, you see this happy mammy face”, said Rita Roberts, professor of history and Africana studies at Scripps College in Claremont, California, as cited by USA Today. “No matter if you put pearls on her, it’s still a happy Black woman content where she is. Even if I’m a really poor White person, it tells me how superior I am to that…" she went on.

Regardless of the moves and the reasons for them, according to Nsenga Burton, professor of film and media studies at Emory University, it’s all nothing more than a “superficial fix”. “It needs to happen”, she said, going on to call on companies to do something more meaningful than just re-branding, such as investing in education and programmes for Black Americans.

Likewise, Teen Vogue Editor-in-Chief Lindsay Peoples Wagner believes the time is right for change in both media and fashion, calling for more active steps in combating racial bias. “I want to see brands, publications, everyone in the industry commit to a long, sustainable change”, Peoples Wagner said on a recent episode of the Digiday Podcast. As many fashion brands were quick to align themselves with the BLM protesters, it appears not everyone is buying it: "plain and simple, I don't think there is the intention behind it to make long-lasting, sustainable change", Wagner said in an email to CNN.

"Everyone can hop onto the BLM movement right now on social media, but what are you doing in your home, in your corporate office, with your connections, with the power you have?"

Similar reactions came in on social media as well, with netizens, including African-Americans, suggesting that the removal of "fictional images" from packages would hardly result in any positive change. "We did it, y’all. Damn. Is this what freedom feels like?" one queried, with others reacting similarly:

Aunt Jemima is NOT a real person.. this isn’t a “war on food” .. y’all some ignorant mfs... Aunt Jemima is literally their MASCOT.. like Tony the Tiger.. except instead of a Tiger it’s a fucking slave.. & removing the rags/adding earrings in the pic changes NOTHING at all pic.twitter.com/Fl9haGges0

So Lady Antebellum changed their name, Aunt Jemima is gone and garage door pull strings have been exposed. Did we meet all the mob's demands yet?

Floyd’s death triggered some changes not only in retail and marketing, but in mass media, with Vogue, for instance, now increasingly welcoming black models on its cover.

For instance, in a memo obtained by Page Six in early June, the iconic fashion magazine’s editor-in-chief, Anna Wintour, wrote that the publication hasn’t done enough to “elevate and give space to Black editors, writers, photographers, designers and other creators”, and that she takes full responsibility for images the magazine has published that were “hurtful and intolerant”. Like the responses from so many other major brands, Wintour wrote that Vogue will do better, stressing that she is “listening”.

Around the same time, Oslo-based student Salma Noor posted her own version of a Vogue cover, featuring a caption that read “Being black is not a crime” in support of Black Lives Matter, and has since inspired a whole viral challenge on social media - the #VogueChallenge, with people, including those of colour, tweeting their alternatives for the magazine's cover.

Vogue has on multiple occasions been implicated in racial injustice cases: for instance, many online remembered a photo shoot by Vogue’s former Creative Director Grace Coddington - in her kitchen, there was a sugar bowl shaped like a black maid.

Meanwhile, sportswear giant Nike, which has earlier been accused of exploiting child labour in its factories in developing countries, is considered to be one of the most active companies in battling racism. For instance, back in 2018, US quarterback Colin Kaepernick became the face of Nike’s 30th anniversary campaign “Just Do It”. It was he who started the kneeling trend, originally to oppose police brutality in the country - a gesture that was copied by protesters, including police and politicians during the nationwide George Floyd rallies in the first half of June.