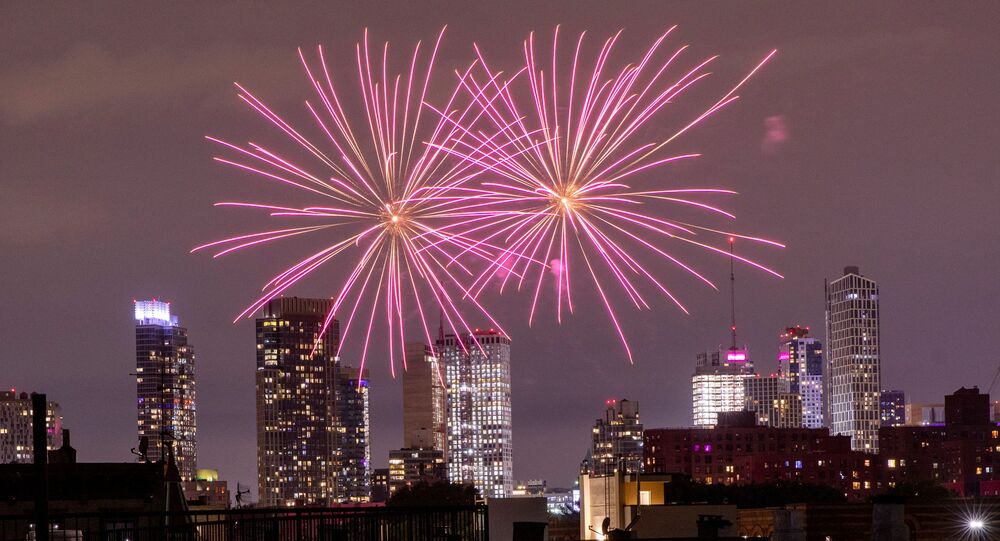 Amid weeks of unseen levels of professional-grade fireworks being fired off late at night in US cities, many are beginning to raise the question of where these expensive explosives are coming from. For some, the answer is obvious - the police must be supplying them - but others think it’s just folks anxious from months of lockdown.

“These are not your normal kids playing with fireworks,” Manhattan piano teacher Michael Ford told the Times. “These are real explosives, like Macy’s-style fireworks.”

"This is a serious issue,” Boston Mayor Marty Walsh told reporters on June 10. "People are frightened. People are losing sleep. Babies and kids are woken up. Pets are terrified. Our veterans and others with PTSD are experiencing real harm, and it's a real fire hazard in our city."

Nonstop for hours, night after night. How can anyone afford THIS MANY professional grade fireworks. This is suspect af! #oakland #oaklandprotest #FireworksTrauma pic.twitter.com/LTeqlxxu4d

​While some of the increase in fireworks is understandable - the upcoming Fourth of July and the recent nationwide celebrations of Juneteenth on Friday could both be partially to blame - the sheer volume has many scratching their heads for firmer answers.

Author Robert Jones Jr., who goes by the name “Son of Baldwin” on social media, floated the idea that the fireworks were either being fired off by police or being distributed to youth by the police, who then encouraged kids to fire them off, with the goal of mass sleep deprivation of Black and Brown communities in rebellion, as well as desensitization to the sound of explosives in the neighborhood so that “when they start using their real artillery on us we won't know the difference.”

“It's meant to sound like a war zone because a war zone is what it's about to become,” he said.

​“The media is reporting this as though it's just Black and Brown kids blowing off steam, but I don't believe that's the case. My neighbors and I believe that this is part of a coordinated attack on Black and Brown communities by government forces; an attack meant to disorient and destabilize the #BlackLivesMatter movement,” he wrote in a Facebook post on June 20. “We think this is psychological warfare, the first wave before whatever the next stage of the attack is.”

Jones dismissed those who would blame the increase on the protesters themselves, who have been spotted in many instances firing fireworks into police lines, saying people would not treat their own communities in such a disrespectful way.

“We think this because there is NO WAY IN THE WORLD that young Black and Brown people would otherwise have access to these PROFESSIONAL fireworks. Fam, these are Macy's July 4th/New Year's-level displays and sonic booms reserved generally for the wealthiest people and institutions,” Jones added.

“And these kids are being supplied these things by the TRUCKLOAD. Hours and hours and days and days and weeks and weeks worth of explosives, y'all. No young Black and Brown people would be able to afford even a FRACTION of this supply. (Some folks have said that they saw boxes of high-grade fireworks left in Black and Brown neighborhoods, which reminds me of the government's role in the crack epidemic).”

Footage captured by residents seems to lend some degree of support to Jones’ theory. In one video that appears to have been filmed in New York, police and fire department crews stand aside while several people standing in the street fire off large fireworks in the middle of the night.

Police and fire PROTECTING the people lighting fireworks!
This is NOT NORMAL! pic.twitter.com/dXnC7M5jeb

​In another video filmed at 3 a.m. local time in West Harlem on June 22, more than a dozen New York Police Department cruisers and vans are seen driving back and forth with their sirens and lights blazing.

In West Harlem, 3am. NYPD putting on a show with fireworks in the background. @NYGovCuomo this is what they are paid for huh? pic.twitter.com/KKOhH5xyBl

​In addition, New York Fire Department firefighters were also caught red-handed on the night of June 16 firing off fireworks at about 11:30 p.m. local time in Crown Heights, Brooklyn, according to the New York Post.

Other circumstantial evidence showing seeming police disinterest in the fireworks is prolific on social media, although not firm evidence of anything by itself.

Walked around the block to figure out who's responsible for these nightly fireworks.

Come to find out they're coming from the building directly behind the NYPD precinct. Officers outside seemed completely unbothered by it all. pic.twitter.com/Tx84alTwHZ

Some of the spike might also be due to record fireworks sales. The American Pyrotechnics Association (APA) fireworks trade group “predicts an all-time high in backyard consumer fireworks sales and use,” APA Executive Director Julie Heckman said on Monday.

Backyard firework use is expected to hit an all-time high this Fourth of July, according to the APA.

Phantom Fireworks Vice President Bill Weimer told CNN on Tuesday that in his 30 years in the business, 2020 is the first season that’s “knocked [him] over.” Weimer suggested the surge was due to “a combination of people getting out, being anxious and having this pent-up energy, and then right around the corner is a quintessential firework holiday.”

‘Animals Taking Over Our Cities’: Eric Trump Lashes Out at BLM Protesters at Tulsa Rally