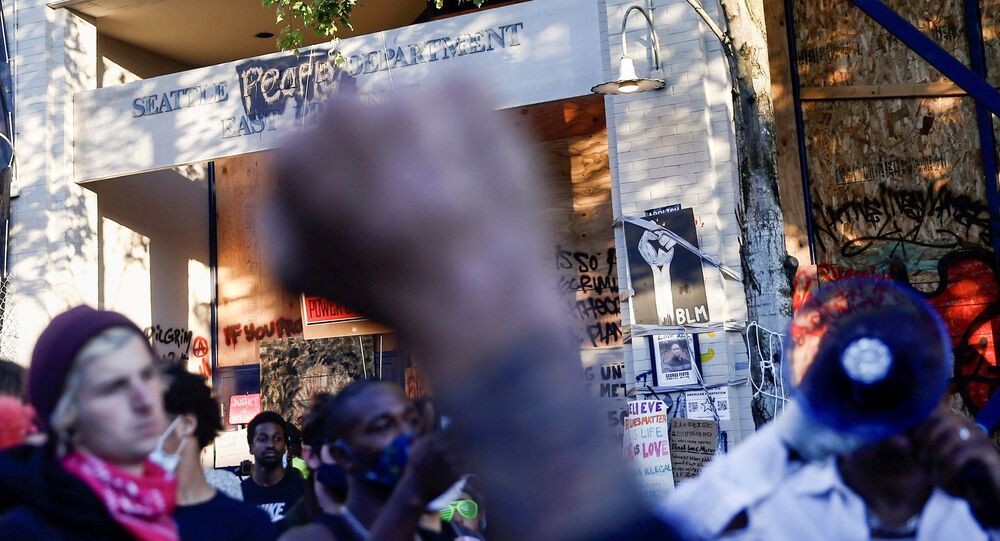 SEATTLE (Sputnik) - Anti-racism protesters in Seattle will resume meetings in the coming days after cancelling one due to difficulty getting black representation, movement organiser David Lewis said on Tuesday.

On Monday, Mayor of Seattle Jenny Durkan announced that the city intends to reclaim the neighbourhood taken over by thousands of anti-racism protesters after two shooting incidents in the area over the weekend and multiple complaints from local residents and businesses.

"We had to cancel one of them [meetings] simply because getting proper representation from the specifically black community in Seattle has proven to be difficult because there is a lot of representation there", he said, adding that the protesters plan to reinstate these meeting in the upcoming days.

Seattle police have been unable to respond to the calls from the so-called "Capitol Hill Organised Protest", or "CHOP". established by protesters in the vicinity of Capitol Hill about two weeks ago, after police retreated from the East Precinct in the area.

The "CHOP" has been patrolled by private armed individuals. Local activists have said that the CHOP does not come under the authority of law enforcement officers.

Asked about protesters' training on dealing with police, Lewis said,  "If any resistance to an officer results in the death of a human, the only defence that we have is numbers and cameras and vigilance. We've always been telling all of our protesters that to stay safe peace first, be defensive".

Police said that on Saturday night, when a 17-year old was shot dead and a 33-year old was critically wounded, law-enforcement officers were met with a hostile crowd that prevented them from getting to the victims.

Mayor Durkan has been heavily criticised for her handling of the situation, especially by President Donald Trump, who has repeatedly called on the local authorities to take back the city.