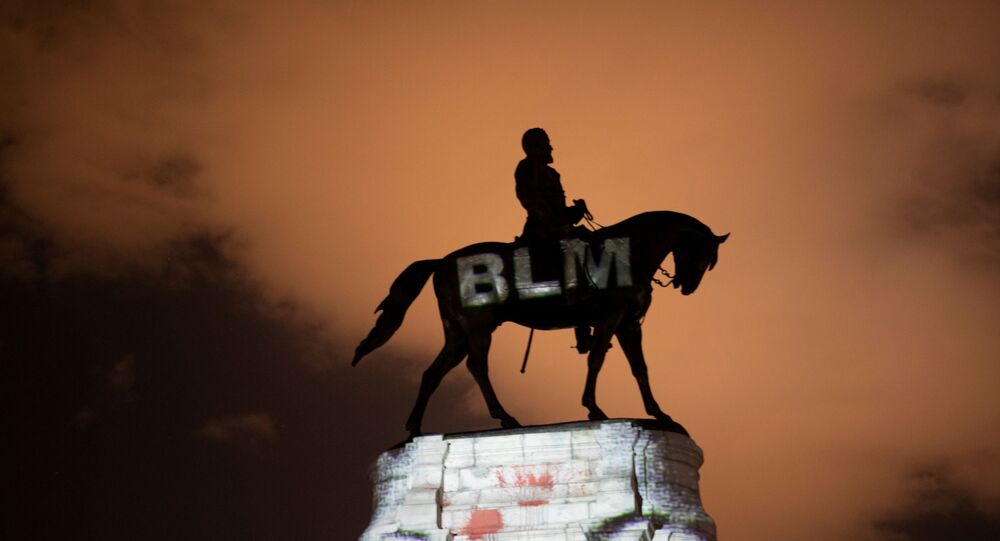 Dozens of historical monuments across the United States have been toppled, vandalized or desecrated in recent weeks since the May 25 killing of an African American by a white police officer in Minneapolis. The man's death caused a wave of anti-racism and police brutality protests across the country, with some unrest turning violent.

US President Donald Trump has authorized federal authorities to arrest anyone accused of vandalizing or destroying "any monument, statue or other such Federal property," with any persons charged with doing facing up to 10 years in prison, in accordance with "the Veteran's Memorial Preservation Act, or such other laws that may be pertinent."

.....This action is taken effective immediately, but may also be used retroactively for destruction or vandalism already caused. There will be no exceptions!

According to the president, this includes retroactively punishing those responsible for any "destruction or vandalism already caused," and there "will be no exceptions" to prosecution.

Over the past three weeks, protesters have torn down, defaced, or otherwise vandalized dozens of statues, monuments and memorials across the US and in other countries around the world. At first, protesters focused on statues they believed to be associated with racism, bigotry, and slavery, such as Confederate generals and soldiers in America's South. However, in the weeks that followed, the vandalism degenerated into attacks on memorials of all sorts, from monuments to Abraham Lincoln, best known for freeing black slaves, to the World War II Memorial in Washington DC.

© REUTERS / JOSHUA ROBERTS
Trump Predicted Attacks on Washington, Jefferson Statues 3 Years Ago – He Was Ridiculed at the Time
Statues of George Washington, America's first president, who commanded US troops in the Revolutionary War against Great Britain, and other US founding fathers have also been targeted. Late last month, the Robert Gould Shaw Memorial - a bronze sculpture in Boston dedicated to African American soldiers who fought in the Civil War, was also defaced by mobs.

Prior to Tuesday's announcement, Trump had repeatedly taken to Twitter to express criticism of local law enforcement for failing to arrest the vandals.

The D.C. Police are not doing their job as they watch a statue be ripped down & burn. These people should be immediately arrested. A disgrace to our Country! @MayorBowser

Some of the initiative to remove statues and monuments has come from Trump's Democratic rivals. On Monday, New York City Mayor Bill de Blasio announced that the "problematic" monument to former President Theodore Roosevelt situated in front of the American Museum of Natural History would be removed owing to its alleged racist depiction of black and indigenous people. Last week, the mayor of Columbus, Ohio announced plans to remove a statue of Christopher Columbus from the grounds of the state capitol in light of Columbus's violence-filled 'discovery' of America.

The statue-toppling frenzy has also spread to other countries, including the UK, mainland Europe, and New Zealand, where monuments to historical figures deemed to be racist, imperialist, or otherwise controversial have been attacked and defaced.