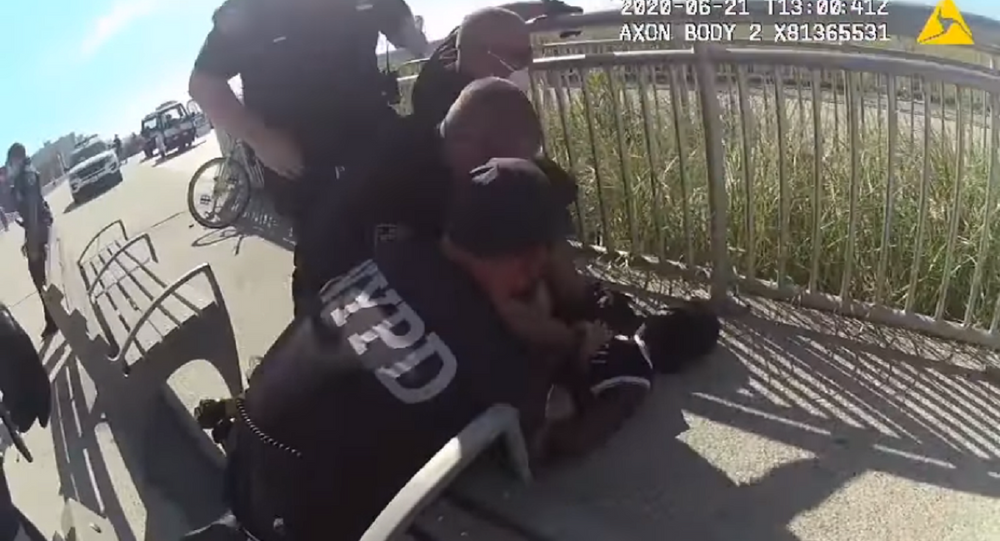 Earlier on Sunday, a video featuring a group of white New York Police Department officers arresting an unarmed African-American man in Far Rockaway, Queens, sparked outrage on social media, as one of the cops appeared to place his arm around the neck of the suspect, while the other three officers handcuffed him.

The of New York Police Department (NYPD) on Sunday suspended without pay a white officer involved in putting a suspect, an African-American, in a recently-banned chokehold while arresting him in in Far Rockaway, Queens, New York City Police Commissioner Dermot Shea said in a statement on Sunday.

“After a swift investigation by the Internal Affairs Bureau, a police officer involved in a disturbing apparent chokehold incident in Queens has been suspended without pay,” Shea said. “While a full investigation is still underway, there is no question in my mind that this immediate action is necessary”.

The commissioner did not mention the name of the suspended officer.

Accountability in policing is essential. After a swift investigation by the Internal Affairs Bureau, a police officer involved in a disturbing apparent chokehold incident in Queens has been suspended without pay. https://t.co/pAFUo0zxnc

On Sunday, a video showing the incident circulated on social media, sparking wide criticism against the officer’s misconduct, especially after the New York City Council passed legislation that considers the use of chokeholds by police a criminal offense.

In the 29-second long video, a group of white NYPD officers were attempting to arrest a black suspect. One of the officers was seen putting the man in the illegal chokehold.

“Yo stop choking him bro!” someone off-screen shouted, as the continues holding the suspect's neck until another officer taps him on the back.

NYPD officer used an illegal chokehold on a black man this morning in Far Rockaway, NY — and only stopped because another cop realized they were being filme.

They choked him out... pic.twitter.com/SXZNnSbwDM

Hours following the arrest, the NYPD released footage from a body camera worn by one of the police officers associated with this incident.

“We are committed to transparency as this process continues,” the commissioner said, adding, “Accountability in policing is essential”.

The measure of banning chokeholds was introduced in New York in the wake of the nationwide anti-police-brutality and anti-racism protests triggered by the killing of African-American George Floyd at the hands of white police officers, one of whom knelt on Floyd's neck until he died in Minneapolis City, Minnesota.