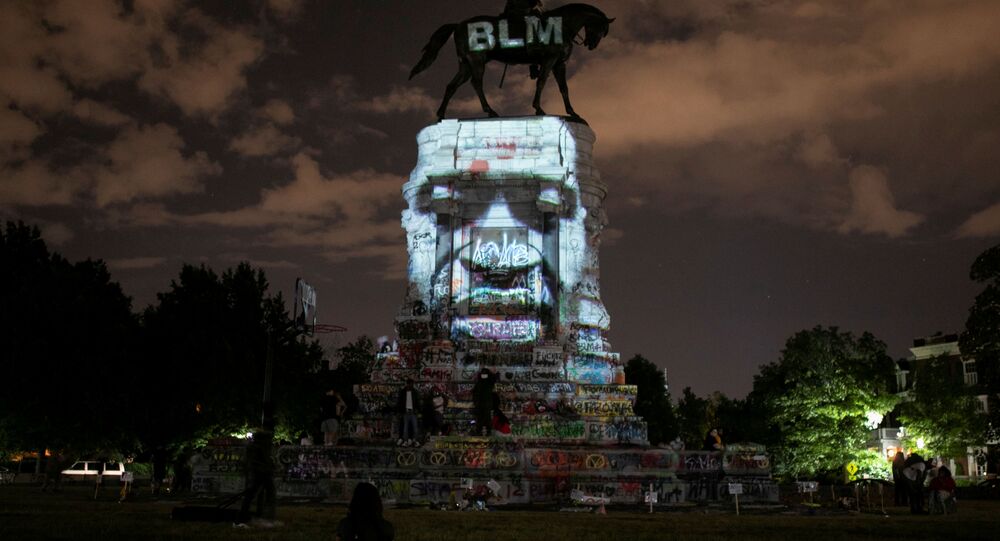 The US, as well as many major cities around the globe, are witnessing an ongoing wave of anti-racism and anti-police-brutality protests sparked by the killing of George Floyd and many other African-Americans at the hands of white police officers. Many Confederate statues and monuments have been removed, either officially or by demonstrators.

Ben Crump, attorney for George Floyd’s family, said on Saturday during a Fox News interview that he is worried about rushing to remove Confederate monuments, calling on Americans to be patient and take a “broad view” of the main issue.

“I think we have to figure out how to honor people who have done things that are beneficial to society, and if they did things that were not beneficial to society, that we can examine in the lens of having a broad view of what we believe as Americans represents the best attributes of our national identity, then we should look at that whether it should be a situation where, if we keep statues up like that, we tell the history of that individual so people will know the whole story,” Crump expanded.

The lawyer, who represents several African-American families, members of which have been killed by white police officers, warned that taking the action of simply removing the monuments without understanding “how we can learn from those things”, could repeat history.

“I’m not sure pulling the statues down is the right thing if we now don't get the lessons to understand how we can learn from those things, so we don't repeat those mistakes of the past. You know, they say history – if not studied – we will often repeat it,” Crump told Fox News host Neil Cavuto.

On Friday, protesters brought down the only Confederate monument in Washington DC – a statue of Confederate General Albert Pike, a commander of the Confederate States Army – in the wake of demonstrations celebrating 155 years since the end of slavery in the United States.

Commenting on the murder of Rayshard Brooks, another African-American killed by a white police officer in a drive-through line of a fast-food restaurant in Atlanta on 12 June, Crump said he that hopes the district attorney would “examine all the attendant circumstances” in the case, especially “when it comes to the whole issue of police use of force”.

“It should be fair for police officers just as much as I believe it should be fair for citizens whether they are black people, white people, brown people or red people,” the Houston-based lawyer said. “We have to make sure that when we quote Thomas Jefferson's words that all are created equally that we honor those words in America by saying we want equal consideration and equal justice under the law for all Americans”.

On 25 May, an African-American resident of Minneapolis, George Floyd, was killed in police custody after one of the several white officers involved in the arrest knelt on Floyd’s neck for eight minutes and 46 seconds as he begged for air.

The videotaped incident has sparked a massive and ongoing wave of protests against racism and police brutality across all 50 of the United States and most of the nation's larger urban areas, as well as many major cities around the world.

Removal of Confederate Monuments: Why Assault Against US History is Fraught With Risks