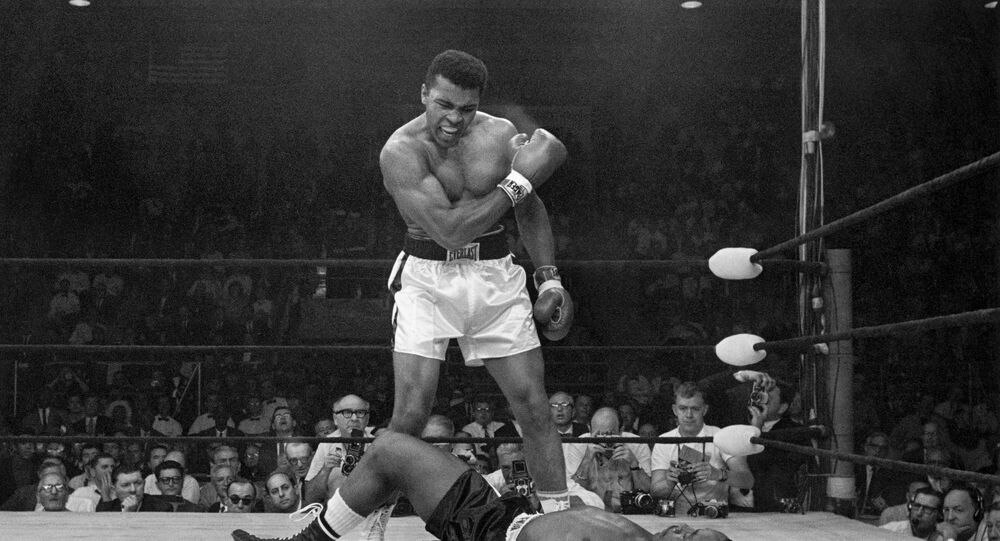 The legendary heavyweight boxer and anti-war/civil rights activist was an outspoken proponent of racial equality, but also famously distanced himself from all forms of bigotry, whether by white or by black Americans, by splitting with the Nation of Islam.

Muhammad Ali Jr says his father would have hated Black Lives Matter and the violent protests which have gripped America in the wake of the killing of George Floyd by a white police officer.

“My father would have said, ‘they ain’t nothing but devils’. My father said ‘all lives matter’. I don’t think he’d agree,” Ali Jr, the boxing legend’s only biological son, told the New York Post.

Calling BLM “racist” and divisive, Ali Jr insisted that “everybody’s life matters,” and that “God loves everyone – he never singled anyone out.”

“It’s a racial statement,” he said of the movement’s name. “It’s pitting black people against everyone else. It starts racial things to happen; I hate that,” he said.

Ali Jr also blasted violent protesters, saying that while peaceful protests were fine, “don’t bust up s***, don’t trash the place.” He suggested that while the white Minneapolis police officer’s killing of George Floyd was wrong, many people don’t “realize there was more footage than what they showed. The guy resisted arrest, the officer was doing his job, but he used the wrong tactic.”

The boxing legend’s son defended cops in general, emphasizing that “not all the police are bad,” and that there’s “just a few” who are. “There’s a handful of police that are crooked, they should be locked up.” He added that he personally had “never had a bad scene with a cop. They’ve always been nice and protect me. I don’t have a problem with them.”

© AP Photo /
Muhammad Ali's Son Detained For Hours Because of His (Famous) 'Muslim Name'
Floyd, 46, died in police custody of heart failure after officer Derek Chauvin knelt on his neck for 8 minutes and 46 seconds while he lay face down in custody with his hands behind his back. The incident was filmed, and Chauvin’s actions, combined with the Minneapolis Police Department’s failure to immediately reprimand him and his fellow officers, sparked nationwide protests across the US which in some places turned into riots, with over 22 people killed so far and over 11,000 others arrested.

Commenting on the Democratic Party’s efforts to cash in politically on the Floyd protests, Ali Jr. claimed that Trump’s opponents were the real “racists.”

“I think Trump’s a good president. My father would have supported him. Trump’s not a racist, he’s for all the people. Democrats are the ones who are racist and not for everybody…Democrats don’t give a s*** about anybody. Hillary Clinton doesn’t give a s***; she’s trying not to get locked up,” he insisted.

Ali Jr. noted that he believed Trump has been a “much better” president than both Bill Clinton and Barack Obama, because he was “the only one to do what he said he would do” after being elected.

He also agreed with Trump’s labeling of Antifa as a terrorist organization, suggesting “they’re no different from Muslim terrorists” and “should all get what they deserve” and be ‘taken out’.

© AFP 2020 /
New FBI Documents Show Bureau Spied on Muhammad Ali
Boxing legend Muhammad Ali won his first Heavyweight Champion of the World title in 1964.  In 1967, he famously refused to be drafted into the US Army during the Vietnam War, stating that he had no obligation to fight for a country that discriminated against African-Americans. He associated with other civil rights movement leaders, including Martin Luther King Jr and the Black Panthers, throughout the 1960s. His protest against the war led him to be stripped of his titles and to be temporarily banned from the sport of boxing, and nearly landed him five years in jail. At the same time, while rejecting white supremacy, Ali also eventually rejected Elijah Muhammad and the Nation of Islam’s black supremacist teachings after leaving that organization in the mid-1970s.

Ali Jr. isn’t the only of Ali’s children to be critical of Black Lives Matter. In 2016, his daughter Laila Ali said she couldn’t support the group online because “all lives matter” and she doesn’t “like to make people feel separate.”