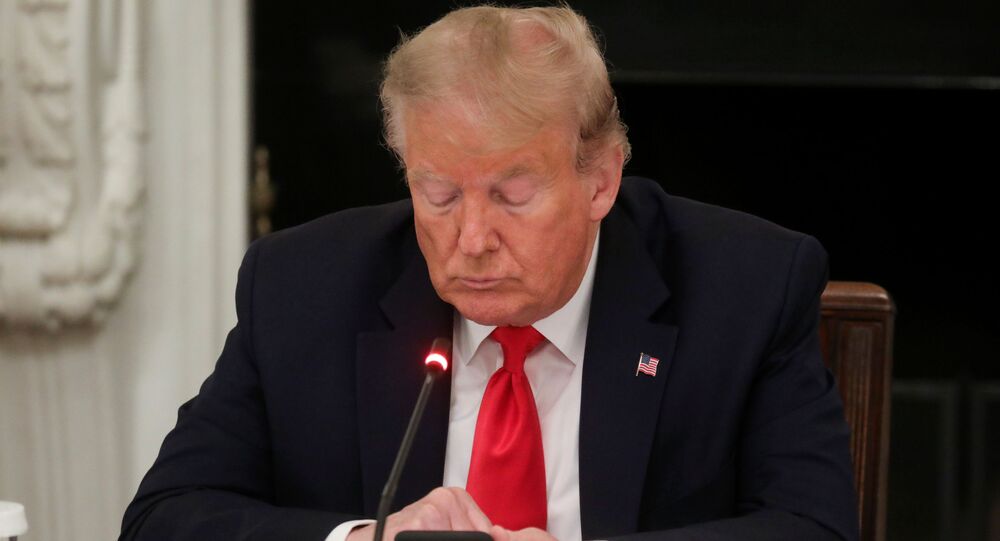 The social media giant has flagged yet another post by Donald Trump as "manipulated media” sparking debate on whether this move and a series of similar others have clear-cut political undertones in them, as well as if it is indeed "censorship", which would have long-lasting impact on the US political and social life.

Twitter's recent move to inform the general public that another presidential tweet is ostensibly propaganda has led many to see the move as part of the ongoing tussle between Democrats and Republicans.

The partisan “gang war” is responsible for that kind of "grey" social media censorship, says Denis Rancourt, a researcher at the Ontario Civil Liberties Association.

“The twitter censorship and grey-deplatforming of Trump are a demonstration that both common sense and the US constitution are being increasingly eroded by partisan fighting,” he argues, stressing that the same historically inherent battle also makes US foreign policy and "illegal violations of national sovereignties" chaotic and irresponsible.

Noting that freedom of expression “is hanging by a thread” in the US, the commentator remarks that “the scissors” are also there, emerging time and again. In light of increased reports about partisan censorship and the pendulum tilted towards mainstream media and stories favouring the Democrats, Rancourt believes it is getting more and more difficult “to think of the USA as a democracy, as opposed to a propaganda show.”

In this connection, he points to the division of the media field into two global - but distinctly uneven - spheres of influence:

“The Republicans still have cable TV, some penetration on social media, and a few mainstream stars such as Tucker Carlson, but, otherwise, it is a Democrat mind field constantly fertilised by a designed and NGO-aligned educational curriculum,” the academic notes.

For others, the political undertones underlying Twitter's action do not seem that evident.

Kevin Curran, professor of Cyber Security as the School of Computing, Engineering and Intelligent System, Ulster University, says he doesn’t know exactly to what extent Twitter’s move was political.

“I can see how the Trump administration feel that the president is personally subject to much higher scrutiny than others," he says, admitting that the president has fair grounds to claim other opponents "do not experience the same judgement."

Speaking of shadow-banning of certain accounts by Twitter, he says the trustworthiness of the moves fully depends on who exactly is technically responsible for them.

Whether or not such labelling is trustworthy “is directly proportional to the size of the team involved and indeed the collective intelligence of that group.” The team will likely have some cultural and political leanings, so a technical feature overseen by the team “is always going to fall short of perceived fairness”, the commentator says citing an omnipresent human bias.

However, he doubts that such flagging could have a serious lasting effect on people’s way of thinking, including in the run-up to the presidential vote, as the electorate would hardly pay any significant attention to any technical flagging of something they genuinely believe in.

The other day, Twitter marked yet another tweet by President Trump - for the third time in the past month - as "manipulated media”. In the post, Trump shared a fake CNN clip with two toddlers , one black and the other one white, running in the street, to the sounds of an ominous jingle and a CNN-style caption reading “terrified todler[sic] runs from racist baby.”

Then, in a quite an unexpected twist, the video shows the pair hugging and having fun, rounding off with the verdict: ”America isn't the problem. Fake news is. If you see something, say something.”

Facebook and Twitter have since removed the so-called "racist baby" video citing a copyright claim by one of the parents of a toddler shown the video. Tensions between Trump and social media have generally been on the rise of late, with his posts increasingly scrutinised and flagged - something that prompted him to blatantly refer to social media as platforms controlled by the "Radical Left".

© REUTERS / Dado Ruvic
The Twitter and Facebook logo along with binary cyber codes are seen in this illustration taken November 26, 2019

Twitter previously labelled Trump's tweets on the George Floyd protests that used the line "when the looting starts, the shooting starts", as well as his outspoken remarks on mail-in voting strongly endorsed by the Democrats. Hardly had the backlash eased off, when Twitter removed a Trump campaign video 'tribute' to George Floyd that denounced aggressive protesters, who have committed acts of vandalism in recent weeks, and praised peaceful demonstrations.

Facebook then removed a Trump campaign ad that displayed a red triangle, after pointing out that the symbol was widely used in 20th century Nazi concentration camps.

A Trump spokesperson stated that the triangle was nothing more than an emoji while claiming, falsely though, that the symbol had been used by the Antifa, a loosely organised left-wing group. The conflict over the repeated labelling of his personal tweets has now led POTUS to announce that he would introduce a new executive order that would facilitate filing lawsuits against social media platforms.