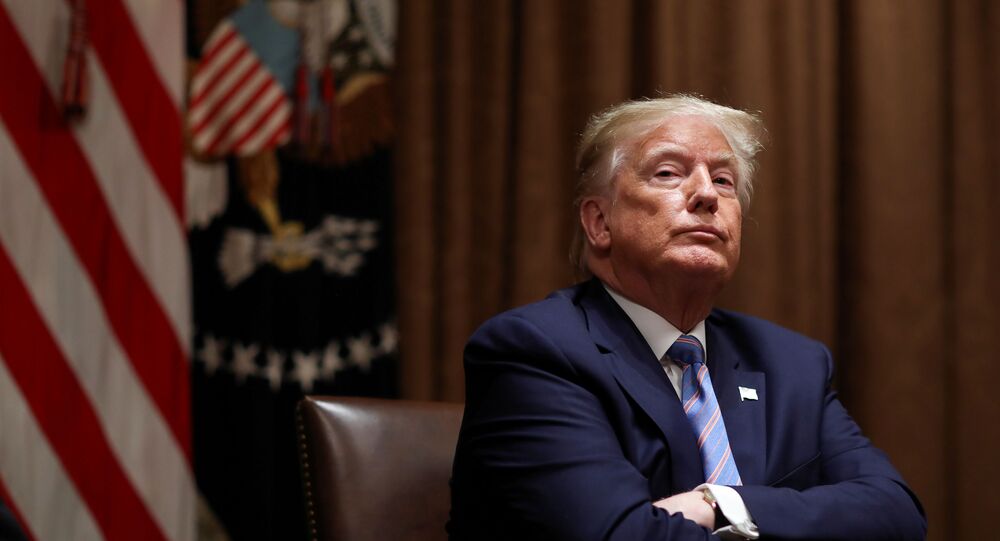 The memoir “The Room Where It Happened”, which is due to hit bookstores on Tuesday, has caused a huge backlash in the White House, with President Donald Trump calling the revelations of the ousted aide nothing more than a bunch of “lies and made-up stories.”

President Donald Trump has reportedly asked his White House inner circle if his ex-national security adviser John Bolton, who is about to release an explosive tell-all book on his stint at the Trump administration, is prison-bound, three sources with knowledge of the conversation told the Daily Beast.

“Do you think he’s going to go to jail for this?” Trump said, according to one of these cited by the publication.

The memoir, titled "The Room Where It Happened" and due to see the light of day on Tuesday, has triggered a huge furore, with some supporting Bolton’s claims about Trump’s “sole” focus on reelection, and others portraying the ex-aide as a disgruntled official merely seeking revenge.

In the West Wing, Bolton’s book has been called a load of “lies”, with excerpts already published by multiple news outlets causing a scramble to block the complete work.

On Thursday, the Department of Justice filed a lawsuit to stop Bolton’s book from hitting the market on the  grounds that the memoir could contain classified information.

Hours later, Secretary of State Mike Pompeo, who is also mentioned in Bolton’s memoir, issued a statement, in which he dubbed Bolton a “traitor who damaged America by violating his sacred trust with its people.”

In his forthcoming book, Bolton recounts how Pompeo once passed him a note during the landmark Singapore summit with North Korea's Kim Jong-un that said Trump was “full of s***.”

“Pompeo...viewed him as a snake trying to hijack the administration’s foreign policy and replace it with his own,” said a source who’s discussed Bolton with Pompeo, stressing it’s hard to interpret the excerpts from Bolton’s memoir as “anything but petty score-settling from a warmonger frustrated he wasn’t being allowed to carpet-bomb the planet.”

Meanwhile, two officials familiar with Pompeo’s mindset, cited by the Daily Beast, suggest that Pompeo’s pushback was motivated by personal reasons - his distaste for leaking.

“He and the president are like-minded about information that gets leaked to the press,” one senior official said. “I don’t know if the stress about leaks comes from the top down. But [Pompeo] is hyper-focused on those that impact his position in the department,” the officials said.

In separate comments, The US National Security council moved to bust claims made by Bolton that Trump allegedly asked Chinese President Xi Jjinping to help him impact voting in farming states by purchasing agricultural goods and that he approved of the Chinese government’s internment of the Uighur population in Xinjiang.

“President Trump has demonstrated repeatedly that he protects those who cannot protect themselves - both here and abroad - and that’s clear in this latest bold action to impose travel restrictions on those who detain or abuse the Uighurs,” said John Ullyot, spokesman for the National Security Council. “The United States is more respected than ever on the global stage.”

A federal court judge told a hearing on Friday that it would be practically impossible to take legal action to recall all copies of Bolton's book.

"The horse, as we used to say in Texas, seems to be out of the barn," Washington DC District Court Judge Royce Lamberth said metaphorically. "It certainly looks difficult to me about what I can do about those books all over the country."

Speaking about the judicial review, Bolton’s lawyer, Chris Cooper, argued at the hearing that nothing in Bolton's disclosure contract with the White House commits the author and publisher to consent to an additional judicial review such as that which Trump is attempting.

A day earlier, on Thursday, Trump took aim at the memoir, calling his former aide, who was sacked in September 2019, a "sick puppy" seeking to "get even" after he was sacked from his White House position, which he held for less than two years.

"Bolton's book, which is getting terrible reviews, is a compilation of lies and made up stories, all intended to make me look bad", the president tweeted.