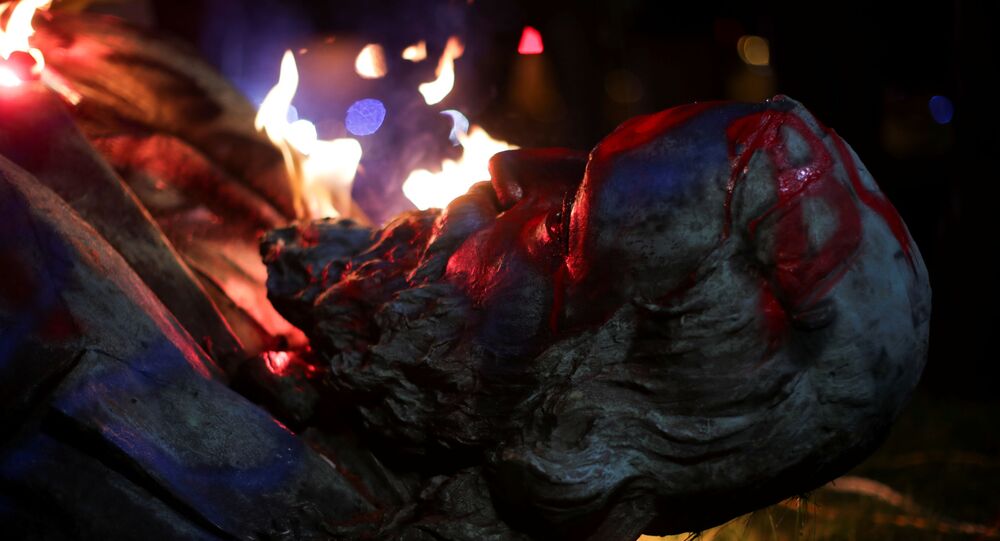 The only Confederate monument in Washington, DC has been vandalised in the wake of protests celebrating 155 years since the end of slavery in the United States.

US President Donald Trump has demanded the arrest of vandals who brought down a statue of General Albert Pike in the nations’ capital and lambasted the city’s police department for lack of action.

“The DC Police are not doing their job as they watch a statue be ripped down & burn,” Trump tweeted. “These people should be immediately arrested. A disgrace to our Country!”

Dozens of people gathered around the statue of Albert Pike, a commander of the Confederate States Army, just outside police headquarters in northwest DC on Friday night. They tied the statue with ropes and pulled it down before lighting it on fire.

A photo of the burning statue with “BLM” spray-painted across its head has been posted to social media.

UPDATE: The statue for Confederate general Albert Pike has been toppled over and lit on fire by protesters. @wusa9 #Juneteenth pic.twitter.com/g5aTWLYf2h

The ­27-foot-tall bronze and marble statue, which is the lone Confederate monument in the US capital, had been a subject of controversy in previous years, with lawmakers and members of the public calling for it to be relocated.

The incident took place in the wake of rallies and celebrations commemorating Juneteenth, a holiday dedicated to the end of slavery in the United States.

This year, the holiday, also known as Liberation Day, coincides with nationwide black-led protests against racism and police brutality, triggered by the death of George Floyd at the hands of Minneapolis police last month.

Many of these protests have been marred by vandalism or the destruction of monuments associated with slavery or Confederate figures, which are believed to be glorifying racism.