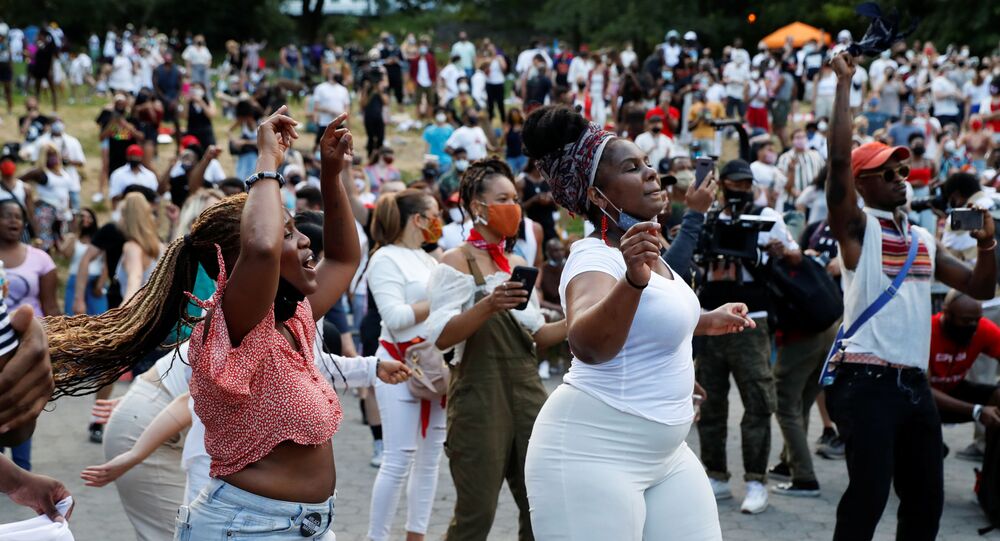 NEW YORK (Sputnik) - Thousands of New York residents took gathered in lower Manhattan on Juneteenth to march to end police violence and systemic racism in the United States, a Sputnik correspondent reported from the scene.

“No justice - no peace,” the protesters chanted on Friday as they started their march near the City Hall, which houses the office of the mayor.

The New York Police Department said 5,000 people attended, was also organized In celebration of Juneteenth - the end of slavery in the United States on 19 June 1865.

Supporters of the Black Lives Matter movement held signs that read: “This is a revolt against racism. Stop the war on Black Americans” and “Bad cops must go.”

“Black Americans are being criminalized by police and it is the police that commits  crimes,” a protester told Sputnik.

“Why should I tell my 15-years-old nephew when he goes out to please be careful with the police due to his skin color?” another protester said.

Many of the present demanded reducing the police budget and relocating the money to address issues that contribute to crime, such as poverty and homelessness.

“Our doctors were wearing plastic bags and didn’t have masks during the [novel coronavirus] outbreak here, and the police has a budget of over $5.6 billion!” a protester who held a “Defund, disband and disarm the police” placard said.

To honor all African American lives lost to police violence in the United States, the demonstrators kneeled on one knee in front of the FBI building in a moment of silence, followed by loud applause.

Police officers was rather limited, with no more than a dozen spotted behind the demonstrators.

Paris Police Ban Three Rallies, Including Protest, Near US Embassy Due to COVID-19 Risk