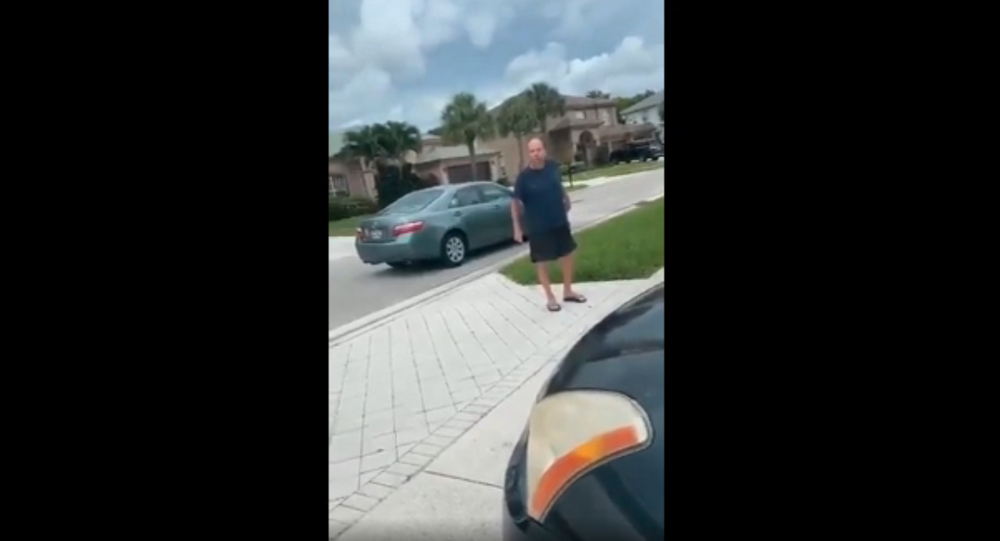 ‘You Don’t Belong’: US Federal Employee Placed on Leave After Berating Teens - Video

A US Department of Homeland Security (DHS) employee is asking for forgiveness after he was seen threatening and throwing out borderline lewd comments toward several teenage girls that he stated “didn’t belong” in a gated community of West Palm Beach, Florida.

Tony Nelson, a 62-year-old grandfather, was forced to spring into action on Sunday after his 15-year-old granddaughter Breonna Nelson-Hicks burst through the door and told him that she was being harassed by a stranger.

The now-viral clip obtained from the incident mostly features a US government employee and three teenage girls. The man in question was first identified by filmmaker Billy Corben as 60-year-old Lee Jeffers of US Citizenship and Immigration Services in West Palm Beach.

Nelson told the Sun Sentinel that his granddaughter and her four friends - two girls and two boys - were tailgated by the man within the gated Wellington community while they drove in a golf cart until they ultimately pulled over. The three girls got out, and the two boys drove away, but that wasn’t the end of it. Jeffers got out of his car to confront the girls, prompting one of them to start recording the encounter on her cellphone.

“Not a problem. I’m going to call the gate and have you all arrested. You do not deserve to be in here,” Jeffers tells the teens, complaining about their operation of the cart.

When Nelson-Hicks and her friends pointed out that they were young girls, Jeffers responds with an odd comment about the age of consent. “Because you’re 15 years old? You could marry in Mississippi or in Alabama,” he shouts.

While the 60-year-old is seen inviting Nelson-Hicks to get her grandfather, who, like her, is Black, Jeffers appears less sure of himself when confronted by Nelson, who has been a resident of the gated community for 33 years.

“Don’t stick your hand out!” Nelson is overheard saying shortly before the video ends. “Did you threaten a child?”

A spokesperson for US Citizenship and Immigration Services issued a tweet on Thursday evening announcing that the agency had viewed a “disturbing” video, but stopped short of identifying the individual in the footage as Jeffers.

However, the agency later confirmed the individual’s employment on Friday, saying that he had been placed on administrative leave and noting that he is not “responsible for adjudicating cases for immigration benefits or status.”

According to the New York Daily News, police received reports from both parties and did not determine a crime had been committed by either party.

Netizens have been labeling Jeffers and his comments as “racist,” and he was also taken to task for his age-of-consent comment about 15-year-olds.

Once again, black children are treated and expected to act older than they are. They are not seen as young people.

To be fair, those young girls seem smarter than that guy so I can understand how he'd make that mistake.

Nelson detailed to the Sun Sentinel that Jeffers called him to apologize, but that was about the end of that interaction.

“Am I going to be forgiving him? I can’t say that. I would be lying,” he said. “I don’t want people to think they can get away with this kind of behavior if they come back later and say they’re sorry. He’s got to prove himself to the community first.”