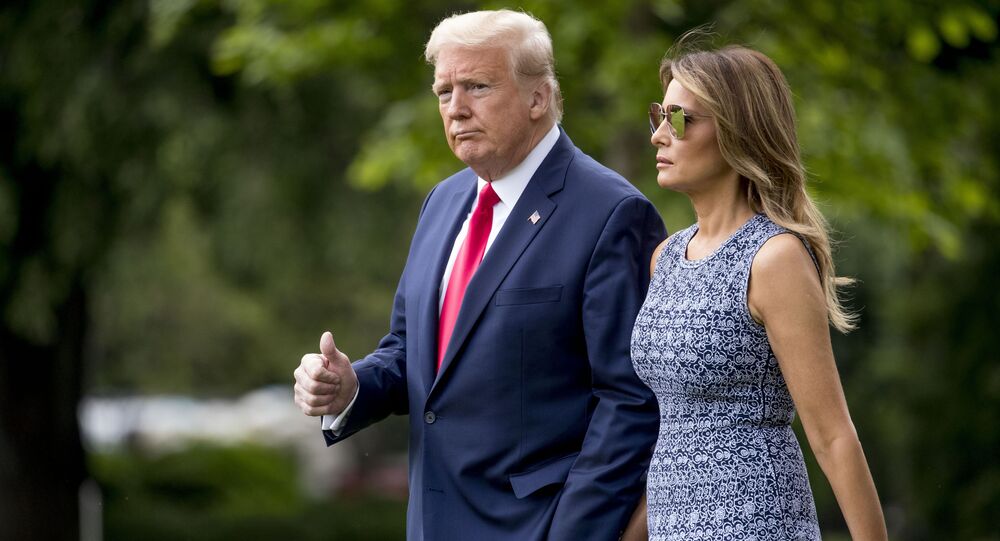 John Bolton’s explosive forthcoming memoir presents a myriad of glimpses, including gossipy ones, of both President Trump’s personal life, the White House inner circle, and his foreign policy take on key developments over the past few years.

President Donald Trump postponed taking the United States out of the Iran deal, the landmark JCPOA accord, so Melania could announce her Be Best initiative, former White House national security adviser John Bolton claims in his soon-to-be-published book "The Room Where It Happened: A White House Memoir", as cited by the Daily Mail.

The memoir suggests that the president planned to announce the US withdrawal from the 2015 Iran nuclear deal on 7 May 2018. However, then-White House press secretary Sarah Sanders reportedly told Bolton that "the first lady had an event scheduled that day so we moved the withdrawal to 8 May".

The event appeared to be Melania’s iconic Be Best campaign, designed to advocate positive change in American families’ well-being, promote kindness, and root out online bullying and abuse.

Separately, Bolton recalls the president calling him after his TV appearance where he talked about the upcoming Singapore summit with North Korean leader Kim Jong-un: he reportedly told his then-national security aide he needed to sing the president's praises more because the move was utterly unprecedented and South Korean President Moon Jae-in, he reportedly said, was going to nominate Trump for the Nobel Peace Prize for holding the summit.

Among a plethora of gossipy tidbits about the president is also reportedly one claiming Donald Trump preferred to initiate breaking up with women himself, as he "didn’t like being dumped".

"'Very revealing', said Kelly when I told him later", Bolton writes in his memoir.

Separately, the president reportedly shared with Bolton that then Defence Secretary Jim Mattis, who was also eventually dismissed and has since been a stauch critic of Trump, praised his bravery for participating in the October 2016 presidential debate right after the infamous "Access Hollywood" tape, where Trump talked about "grabbing women by the p****", was leaked.

Trump claimed that Mattis, who had fought in the Persian Gulf War, told him it was "the bravest thing he had ever seen anyone do".

The White House has vehemently sought to block the memoir by the ousted national security adviser, asking a federal court for an emergency restraining order on Wednesday against its publication.

© AFP 2021 / BRENDAN SMIALOWSKI
In this file photo taken on May 13, 2019, National Security Advisor John Bolton listens while US President Donald Trump speaks to the press before a meeting with Hungary's Prime Minister Viktor Orban in the Oval Office of the White House in Washington, DC. - Trump has no guiding principles and is unfit to be president, Bolton said in an interview released on June 18, 2020, to promote his explosive book. "I don't think he's fit for office. I don't think he has the competence to carry out the job," Bolton told ABC News.

The Justice Department requested an injunction to give a no-go to Bolton’s memoir, which has already been printed and widely distributed to booksellers and news media, although the White House insists it contains classified information. The department requested that a hearing be slated for Friday, while the book is due to see the light of day next Tuesday.

The president lashed out at Bolton Wednesday, telling Fox News: "This is highly classified information and he did not have approval. Nobody has been tough like me".

He also took aim at Bolton Thursday morning, calling his former aide a "sick puppy" seeking to "get even" after he was sacked from his White House position which he held less than two years.

"Bolton's book, which is getting terrible reviews, is a compilation of lies and made up stories, all intended to make me look bad", the president tweeted.