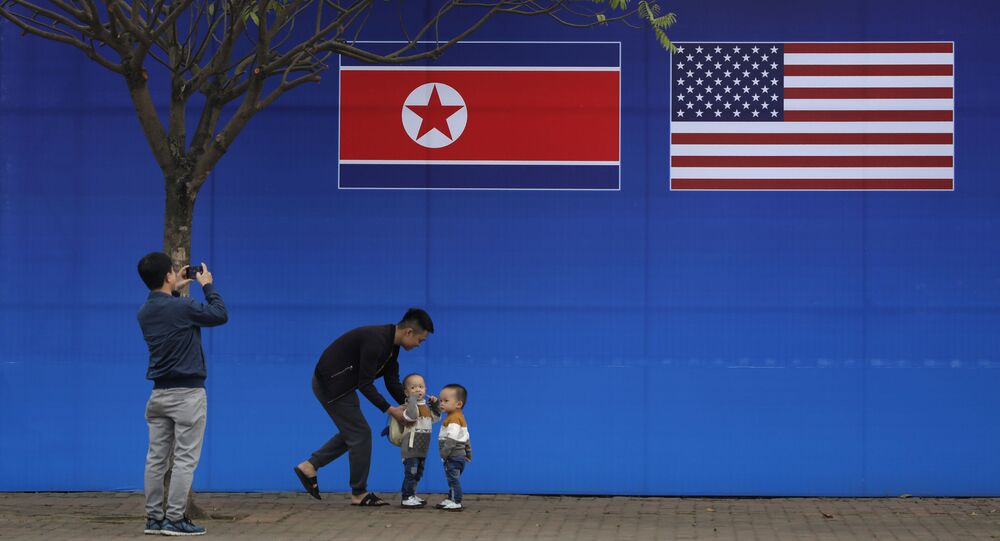 Last week, Pyongyang blamed Washington for trying to exacerbate bilateral relations, pledging that the DPRK will "build up more reliable force to cope with the long-term military threats from the US".

Experts have warned that North Korea may launch an attack, including a cyber effort, on the US presidential election scheduled for 3 November.

Sung-Yoon Lee, the Kim Koo-Korea Foundation professor in Korean Studies at the Fletcher School of Law and Diplomacy at Massachusetts-based Tufts University, was cited by Fox News as saying that Pyongyang "will be able to test how far and to what extent it can damage the US election system".

"I fully expect North Korea to test its own capabilities to see what it can get away with by hacking into the US election system", Yoon argued, calling the DPRK’s cyber abilities "simply one of the best in the world".

"It would be surprising if North Korea did not test its abilities during the election", he added.

"[…] The latest veiled, thinly veiled threat from the North Korean foreign ministry about meddling in the upcoming US elections […] is all part of the growing escalatory strategic playbook which will be punctuated by a more serious provocation, like an ICBM [intercontinental ballistic missile] or even nuclear test", the expert asserted.

He suggested that the DPRK will try to become "a major concern to the integrity of the US election system", which Sung-Yoon described as "a rational consideration for North Korea".

"And it's unlikely that North Korea may pay any kind of real penalty in the wake of meddling in the US election. Any response to a future North Korean cyber attack must be firm", he pointed out.

According to the expert, the main thing is not to allow Pyongyang to "feel further emboldened, to interfere in the US election system, or to blatantly violate UN Security Council resolutions".

The view was echoed by former Tennessee Republican Zach Wamp, who currently serves as co-chair of the bipartisan group Issue One Reformers Caucus. He warned that even though North Korea "most of the time is bluffing", Washington should take the threat of a possible cyber attack by Pyongyang on the US election "seriously".

"They can do it, you know, from a closet in North Korea because of technology. So, it's almost like the box cutters used in 9/11. It's crude technology. We don't know what they're up to, but they could really mess this up again in this election cycle. So, we've got to be very aware of this threat", Wamp cautioned.

At the same time, he suggested that the DPRK will be unable "to influence the outcome of our election" and that "they can just further separate us from each other and cast misinformation that divides us and causes us to lose confidence in the process".

"We need resources, we need to all be focused on a safe, secure, and open election. To me, that really is what separates the United States from the rest of the world, is the fact that we freely elect our leaders and then we peacefully transfer power, even in the middle of a crisis. We did it in the Civil War and the Great Depression and we have got to do it again this year", Wamp concluded.

The remarks come after Kwon Jong-gun, director-general for US affairs at North Korea's Foreign Ministry, warned Washington against meddling in inter-Korean relations, adding that it is in the White House’s interests to "hold its tongue" if it wants the US presidential election to be held smoothly.

"If the US pokes its nose into others’ affairs with careless remarks, far from minding its internal affairs, at a time when its political situation is in the worst-ever confusion, it may encounter an unpleasant thing hard to deal with", Kwon said last week, urging Washington to stay quiet unless it wants to "experience a hair-raiser".

"It would be good not only for US interests but also for the easy holding of upcoming presidential election [in the country]", the official added without elaborating.

In a separate development last week, North Korean Foreign Minister Ri Son-gwon promised to build up a "more reliable" force against US military threats, adding that the 2018 summit between North Korea's leader Kim Jong-un and US President Donald Trump led to no improvement in Pyongyang-Washington relations.