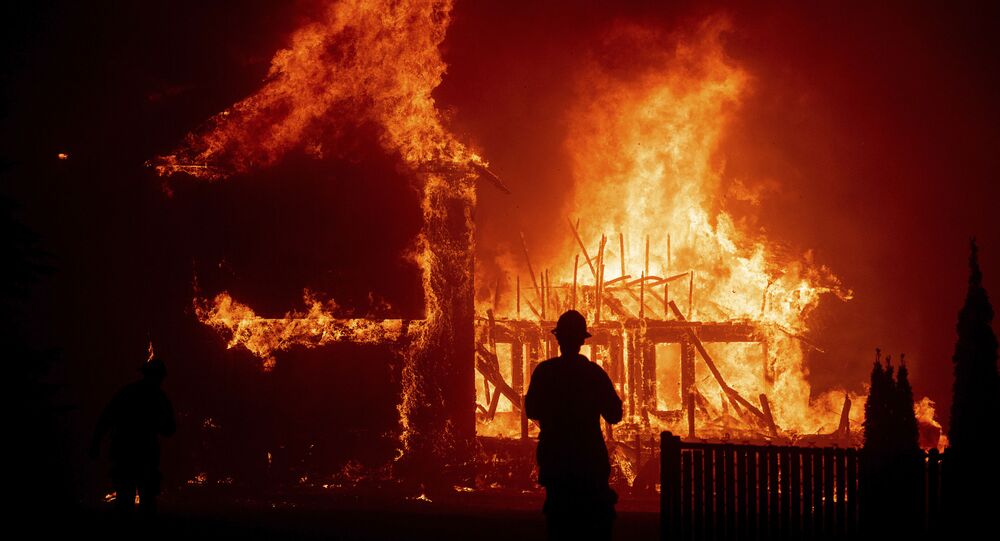 In November 2018 a faulty electricity pylon triggered a wildfire in the tinder-dry bush of northern California which raged out of control for 17 days, killing 85 people. So who was to blame and how is Pacific Gas & Electric still soldiering on after years of bungling and lawsuits?

The CEO of Pacific Gas & Electric (PG&E), Bill Johnson, appeared in a courtroom in Butte County, northern California, on Tuesday, 16 June, and apologised for his company’s role in the events of 8 November 2018.

Around 6.15am that morning a faulty power line near one of PG&E’s hydro-electric dams started a fire which spread rapidly as a result of high easterly winds and dry undergrowth.

The fire ripped through the small towns of Concow and Paradise within two hours, devastating both communities and killing 85 people.

Prosecutors were not certain they could prove the company was responsible for one of the deaths, which was why they only faced 84 felony counts.

Among those who died was Dennis Clark Jr, 49, who was found in the passenger seat of a car being driven by his 72-year-old mother. Two other cars behind them also contained bodies.

The full horror of what happened is explored in a PBS documentary, Fire In Paradise, which is currently being screened on Netflix.

PG&E killed (manslaughter, presumably) 84 people, but ah, the crimes were committed by a “corporate entity”, so no one is going to jail. Apparently all the decisions at this company which led to these deaths were made by a computer running an AI program, not by actual people. pic.twitter.com/TYYUpWSPGa

​Mr Johnson pleaded guilty to 84 felony counts of involuntary manslaughter and looked contrite as Judge Michael Deems read out the names of the dead.

In a statement published on the company’s website, Mr Johnson said: "No words from me could ever reduce the magnitude of that devastation or do anything to repair the damage. I hope the actions taken today bring some measure of peace."

Here is the exact hook from the PG&E transposition tower that caused the #CampFire. The hook broke and allowed a live wire to hit the transmission tower sparking a massive fire. The hook was made in 1919, nearly 100 years ago pic.twitter.com/i9gLrpIFqJ

​Mr Johnson - who joined PG&E six months after the fire -  said: “Our equipment started the fire that destroyed the towns of Paradise and Concow and severely burned Magalia and other parts of Butte County.”

PG&E has agreed to pay a fine of US$3.5 million but that is a drop in the ocean compared to its civil liabilities for the so-called Camp Fire.

Last year PG&E entered Chapter 11 bankruptcy, having agreed to pay out a total of US$13.5 billion to relatives of those who died and to thousands of house and business owners and farmers who lost their homes or livelihoods.

Today, PG&E CEO stood in front of a Butte County judge and plead guilty on behalf of the company to 84 counts of involuntary manslaughter and 1 count of unlawfully starting a fire. The #CampFire destroyed nearly 19,000 structures including the entire town of Paradise. pic.twitter.com/ShlkjFTuVV

​A federal judge will make a final decision on 30 June about whether to accept PG&E's bankruptcy plan. If it is approved Mr Johnson will step down as CEO and allow a new board of directors to hire his replacement.

One year ago, I woke up and drove north to #Paradise. Headed uphill from the valley to find the world aflame. The #CampFire stole so much. It killed 85 people and leveled more than 14,000 homes. This was the beginning. But today, I’ll be writing about how far everyone has come. pic.twitter.com/XrvTlTtpXc

​In 1996 Erin Brockovich, a single mother and paralegal, successfully sued PG&E on behalf of a group of residents in Hinkley, California. Brockovich - who was played by Julia Roberts in a 2000 film - proved the company had dumped a carcinogenic chemical into the town’s drinking water and PG&E settled for US$333 million.

In 2001 PG&E entered into Chapter 11 bankruptcy after getting caught out by a drought which hit its hydro-electric power generation and forced it to spend millions of dollars on buying in electricity from outside California.

In 2010 the San Francisco-based company was placed on probation after one of its natural gas pipelines blew up in a neighbourhood in San Bruno, California, killing eight people.

PG&E staggers on from one crisis to the next but a group of California politicians, led by the Mayor of San Jose, Sam Liccardo, are calling for the company to become a nonprofit co-operative, similar to a credit union.

In December Mr Liccardo said: "We've presented a framework for a viable customer-owned PG&E that will be transparent, accountable, and equitable. I'm proud to stand with our growing coalition of 114 elected leaders - who together represent more than half of Californians served by PG&E - urging the company’s transformation to put its days of underinvestment, mismanagement, and negligence far behind us."

PG&E has yet to respond.