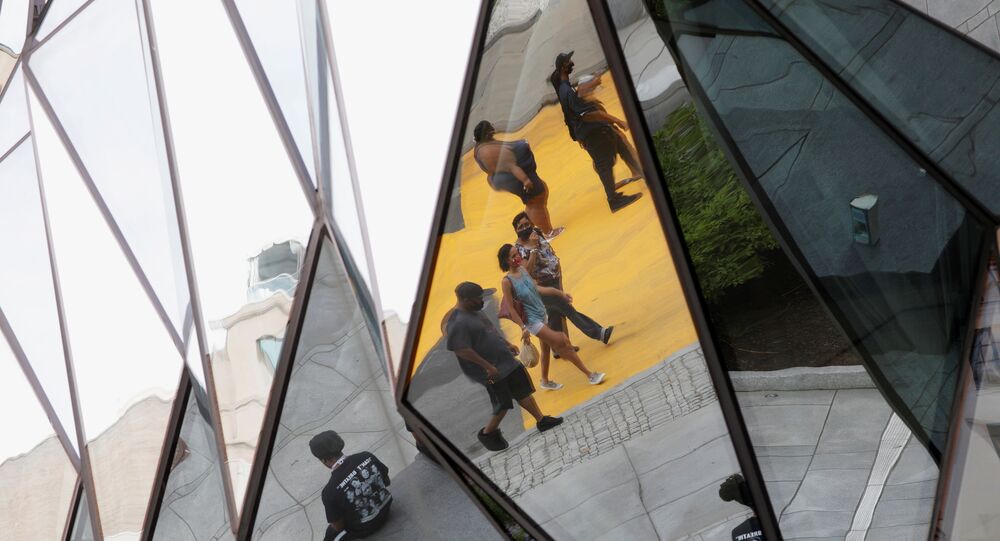 Be it local or global issues, including the outbreak of the COVID-19 pandemic, the failure of the Democratic party at the 2016 presidential elections or the ongoing anti-police-brutality protests sweeping the country, some US officials still attempt to put the blame on foreign actors.

In his letter to Wray, Lynch claimed that adversaries including "the Russian Federation, China, North Korea, and Iran" may have made attempts to use the anti-racism protests sweeping the United States as a way to further "sow division and undermine our democracy".

"I am deeply concerned that foreign adversaries may exploit this critical moment in American history to exacerbate social and cultural differences across the American political spectrum and ultimately threaten our national security", the letter said.

Following a tendency to share unproven allegations to again blame other governments for "disinformation", Lynch cited the use of hashtags #BlackLivesMatter and #Minneapolis by "Chinese Foreign Ministry officials, Russian-backed news outlets, and others with ties to Russia and China" as proof of possible foreign meddling.

"Since the murder of George Floyd, multiple foreign actors reportedly have sought to exploit the ensuing protests around the country. For example, Chinese and Russian-backed media outlets and Twitter users have increasingly piggybacked onto social media hashtags to push divisive messages and criticize the United States’ handling of the protests. As of June 1, 2020, Chinese Foreign Ministry officials, Russian-backed news outlets, and others with ties to Russia and China have tweeted more than 1,200 times about US protests using hashtags such as#BlackLivesMatter and #Minneapolis", Lynch said in his letter.

The Dem lawmaker cited US Attorney General Barr's claim that there is "evidence that some of the foreign hackers and groups that are associated with foreign governments  are focusing in on this particular situation we have here and trying to exacerbate it in every way they can". No evidence has been provided to support the assertions of foreign meddling, whether in the letter, or by Barr.

Lynch is not the first politician to point a finger at the Kremlin when it comes to federal and state governments facing ongoing Black Lives Matter protests in the US. Earlier, former US President Barack Obama's adviser, Susan Rice, attempted to blame Russia for "hijacking the demonstrations", claiming that it is "right out of the Russian playbook" when several of the protests became violent. In keeping with the normal modus operandi of these foreign meddling accusations, no evidence is cited to support any allegations.

Responding, Russian Foreign Ministry spokeswoman Maria Zakharova expressed condemnation toward the Trump administration for "blaming absolutely everything that was not to their liking on Russia".

Exacerbating pressure on foreign "meddling", in particular that which could purportedly be Russian, The New York Times studied modern tactics in detail, that, according to the paper, are used by "Russian trolls". The latter, after thorough examination conducted by the NYT, appeared to improve their insidious ways of influencing anything and everything. Now, according to the NYT, omnipotent "Russian hackers" do not simply create conspiracies and invent "divisive" content, but fuel and spread the content posted by Americans, while "keeping a lower profile" and creating "online personas", cunningly camouflaging themselves as "typical Americans". The report became yet another "warning" ahead of the upcoming 2020 US presidential election.

Another hot topic is the presidential election, as US officials again claim that the Kremlin is meddling with the presidential race to try and get the incumbent Trump re-elected - following the same allegations that he was elected for the first time with Russian help. The new wave of unfounded accusations against Russia comes despite then-US Special Counsel Robert Mueller concluding in 2019 that his probe did not find any connection between Russia and Trump's 2016 election campaign. In its turn, Russia has repeatedly denied these accusations, as well.

China has been put in the crossfire of accusations from the Trump administration too, blamed for downplaying the COVID-19 pandemic at its outset and influencing the World Health Organisation while continuing to blacklist Chinese tech giant Huawei for "posing a threat to US national security".

Despite repeatedly refuting the accusations, Beijing remains the subject of some US officials' claims that the nation is attempting to launch "disinformation campaigns" and influence other countries.

Under such "fears", both Russian and Chinese media outlets have received labels on Facebook that say that they are "state-controlled", while most Western outlets are omitted from similar labeling, after Facebook's social media platform concluded that they enjoy editorial independence.

George Floyd Protests in the US

Protests against police brutality and racism have spanned the United States after the May killing of African-American George Floyd by white officers while the former was in police custody in Minneapolis. Floyd died after white police officer Derek Chauvin pinned the former to the ground for 8 minutes and 46 seconds in a knee chokehold, ignoring him begging for air to live.

Confronted by militarized police forces in several areas of the nation, some of the protests turned violent, resulting in arson, looting and the removal of statues.