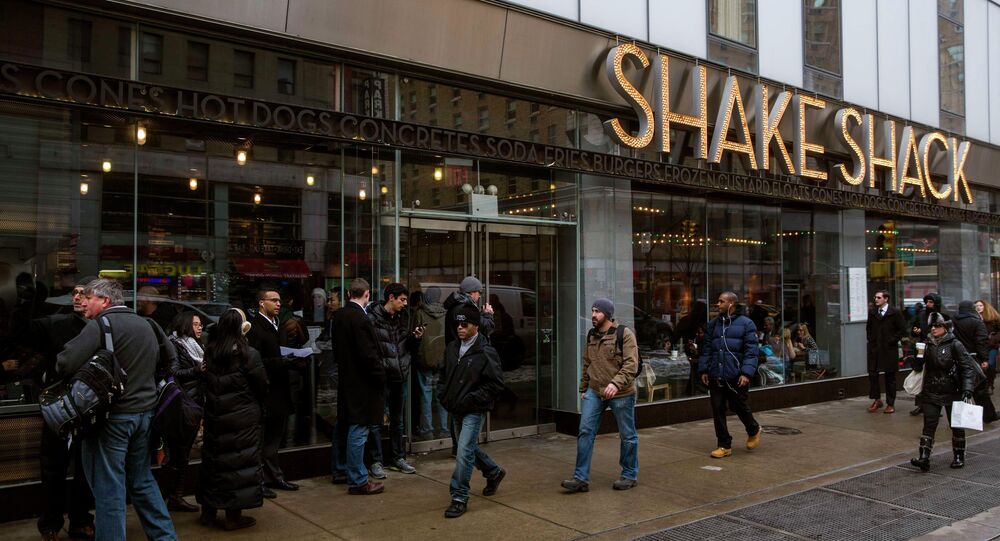 Shake Shack representatives said on Monday night that they are "horrified by the reports of police officers injured" at its fast food restaurant in Manhattan, and that they are cooperating with police "in their investigation".

The NYPD have opened a probe into the suspected poisoning of three officers at a Shake Shack restaurant in the city on Monday.

The policemen were reportedly rushed to a hospital when they felt unwell after consuming food from the Shake Shack on Broadway and Fulton Street in downtown Manhattan on Friday night at about 8:30 p.m. All of them are reportedly in stable condition at the moment.

The New York Daily News cited unnamed police sources as saying that before falling ill, the officers noticed that their milk shakes tasted strange. One of them noticed a "clump of something" in their cups, while another smelled bleach, according to the sources.

The New York police union Detectives' Endowment Association, in turn, tweeted on Tuesday that "[…] three of our fellow officers were intentionally poisoned by one or more workers at the Shake Shack at 200 Broadway in Manhattan" and that "fortunately, they were not seriously harmed".

The statement was echoed by New York City’s Patrolmen's Benevolent Association which argued that "when NYC police officers cannot even take meal without coming under attack, it is clear that environment in which we work has deteriorated to a critical level".

The association added that "we cannot afford to let our guard down for even a moment".

On its official Twitter account, Shake Shack, for its part, wrote that they are "horrified by the reports of police officers injured at our 200 Broadway Shack in Manhattan", adding "we are working with the police in their investigation right now".

Almost all Twitter users immediately lashed out at Shake Shack over what they described as a "horrible" and "reprehensible" incident, claiming that it was nothing but attempted murder.

Absolutely DESPICABLE!!! Whoever did this should be thrown into prison for attempted murder!!! pic.twitter.com/vMlnClCdQW

I hope they are arrested and prosecuted to the fullest extent of the law.

Police officers "injured"? They were poisoned by your staff. Poisoned with bleach cleaner. That's attempted murder. We want them arrested. Now.

Find out who is responsible. They need to be arrested and charged with attempted murder. Needless to say they should be fired ASAP.

Wow this is horrible. No more shake shack ever. Bad company.

That is criminal! Prosecute to the fullest! #BackTheBlue

They should be charged with 3 counts of attempted murder

Absolutely reprehensible - you owe it to your employees, customers, and the nation that gives you the ability to be successful to get to the bottom of this.

"Police officers ‘injured’? They were poisoned by your staff. Poisoned with bleach cleaner. That's attempted murder. We want them arrested. Now", one user tweeted.

Another netizen expressed hope that all those responsible for the suspected poisoning would be "arrested and prosecuted to the fullest extent of the law".

The Shake Shack incident comes amid protests against police brutality and racial discrimination that have been ongoing in the US and beyond since the death of African American man George Floyd in police custody in Minneapolis on 25 May.

‘It’s Not for a Single Cop, It’s for All of It’: Chappelle Drops Special Dedicated to Floyd Protests