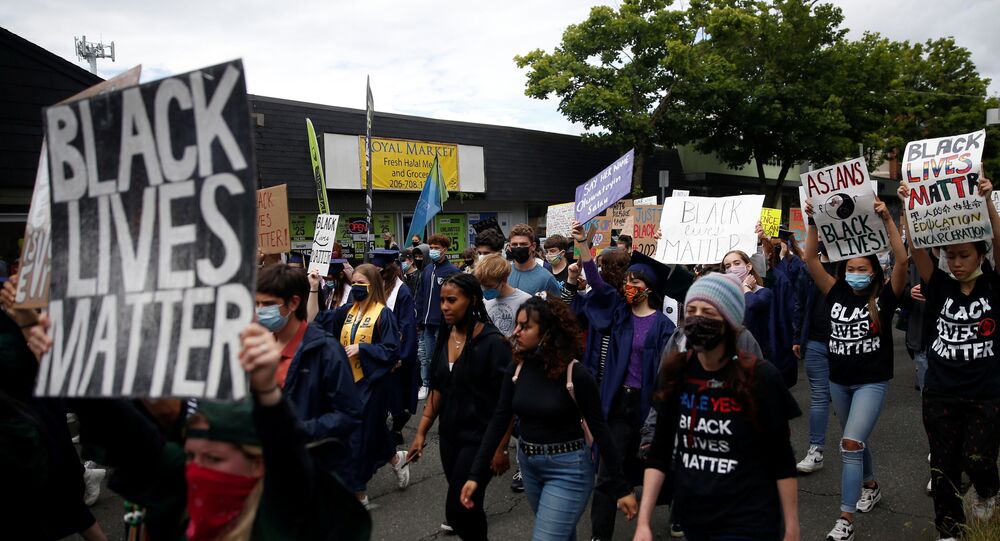 WASHINGTON (Sputnik) - A few hundred protesters have taken to the streets of Washington, DC, in continuation of a seemingly waning campaign against racial injustice and police brutality.

The demonstration, a far cry from earlier events numerically and emotionally, was to mark two weeks since the forceful dispersal of a rally in front of the White House.

"The police and all the agencies came down this street, firing flash bang grenades, they were shooting tear gas, pepper spray, all sorts of things to disrupt this demonstration and they broke us up", a speaker reminded the crowd of that day's events.

He identified himself as an activist from the Party for Socialism and Liberation.

Protesters carried banners "Stop the war on black America", "This is a revolt against racism" and chanted "No justice, no peace", "Defund the police" along with other slogans from the campaign ignited by George Floyd’s death in police custody in Minneapolis. In tribute to the African American they knelt at one of Washington's central intersections.

The procession was escorted by a small police force who briefly stopped traffic along the route. There were no violent incidents during the event.

On 1 June, after three days of protests in the centre of Washington, DC, marred with arson and looting, law enforcement agencies dispersed the rally at Lafayette Square allowing US President Donald Trump and his entourage to walk to St. John's Church for a photo opportunity.

Nicole Roussell, a Sputnik journalist in Washington, DC, said she was fired at by US police several times while the protest was being quelled, despite repeatedly saying she was a press staffer. As Roussell filmed protesters "being sprayed with mace in their eyes", she was shot in her calf with a rubber bullet.