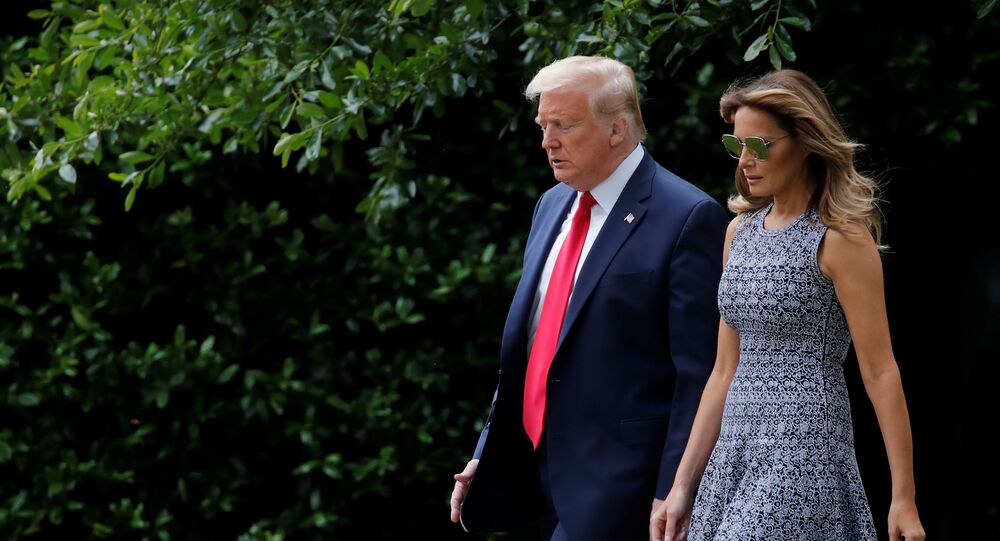 A spokeswoman for Melania Trump dismissed the new book about the First Lady as based on inaccurate information and belonging “in the fiction genre”.

Melania Trump asked staff not to call her by her new title after Donald Trump claimed election victory in November 2016, in a sign of how uncertain she felt, claims a new book, written by Washington Post reporter Mary Jordan.

"Stop calling me First Lady,” FLOTUS had urged, according to one of the people who worked with her after the election, cited in the book, excerpts of which were published by The Washington Post on 12 June.

© Sputnik / Alexei Agaryshev
President Donald Trump and his wife Melania during the inauguration in Washington.

“The Art of Her Deal: The Untold Story of Melania Trump” is touted as drawing “an unprecedented portrait of the first lady” based on interviews with more than 100 people in five countries, including with the first lady’s schoolmates in her native Slovenia.

According to the author, the election triumph in 2016 came as a surprise to both Donald Trump and his wife, with the future president already mulling spending the post-election period in Scotland, having instructing the pilot of his private jet to “fuel up the plane”.

As she gradually eased into her new role, which Melania Trump was ostensibly reluctant to embrace, she spent the first six months of Trump's presidency in New York, at home in Trump Tower with their son, Barron, who was 10 at the time.

According to the author, FLOTUS delayed her move to Washington partly due to an aversion to being scrutinised by the media, as well as out of anger at media reports of her husband's numerous infidelities that the 2016 election campaign had been rife with.

Donald Trump has vehemently denied any cheating on his spouse.

The new book states that before moving to Washington, Melania Trump took the opportunity to amend her financial arrangement with her husband, as she sought to ensure the financial future of both herself and the couple’s son, Barron.

Based on interviews with a number of people close to the Trumps, the author suggests that Melania Trump believed she had contributed significantly to her husband’s success, and in light of the changed situation in the aftermath of the election victory she felt compelled to revisit their pre-nup agreement.

© AFP 2021 / Timothy A. Clary
Melania Trump, wife of Republican presidential candidate Donald Trump, arrives on stage on the first day of the Republican National Convention on July 18, 2016 at the Quicken Loans Arena in Cleveland, Ohio

The newly-minted First Lady wanted to ensure that Barron got his “rightful share of inheritance” alongside Donald Trump’s other children, Donald Trump Jr, Ivanka, Eric and Tiffany. She was also said to be concerned lest the president’s daughter Ivanka took over the reins of the family business, writes Jordan.

Melania Trump was also apparently eager for Barron to remain in New York with his friends until the end of the school term.

However, claims the author, the First Lady was forced to reconsider when faced with the challenges of Barron’s school routine.

“Simply getting Barron to his classes unleashed massive traffic problems around his school, Columbia Grammar and Preparatory School on Manhattan’s Upper West Side,” Jordan writes.

The book states that parents of other children, many of whom were busy and influential, took a dim view of the disruption to their schedule, as school drop-offs and pickups were being delayed.

“Parents also worried about the safety of their own kids, even with the constant presence of the Secret Service. Not to mention that many of them were progressive New York Democrats who had voted for Hillary Clinton and couldn’t stand Trump,” says the book.

The daily security costs for Melania Trump and Barron were estimated to be $125,000, the author cites the New York Police Department as saying.

Melania Trump and Barron settled into the White House in early June 2017, with the First Lady seemingly pleased with her re-worked financial arrangement, claims the book.

“According to three people close to Trump, a key reason was that she had finally reached a new and significantly improved financial agreement with Trump, which had left her in a noticeably better financial position…Those sources did not know precisely what she sought, but it was not simply more money,” writes Jordan, according to a preview of the book seen by Associated Press.

Sources are cited as suggesting FLOTUS sought to secure Barron’s possible involvement in the family business, the Trump Organization, and ownership of Trump property.

The boy’s Slovenian citizenship was also seen as a bonus in case he became involved in Donald Trump’s business in Europe.

Melania Trump is depicted in the book as focused, ruthless and ambitious, allegedly quick to discard friends after she moved on from various stages in her modelling career to marriage, and, ultimately, the White House.

She is portrayed as a woman who “would seize an opportunity and put great effort into it. Then she would move on and never look back.”

The new book has been slammed as nothing but “fiction” by a spokeswoman for Melania Trump.

“Yet another book about Mrs. Trump with false information and sources… This book belongs in the fiction genre,'' said Stephanie Grisham in a statement to the Daily Mail.

Melania Knauss and Donald Trump married on 22 January, 2005 at the Episcopal Church of Bethesda-by-the-Sea in Palm Beach, Florida, with a reception at Trump's Mar-a-Lago estate.

Previously, Trump was married to Ivana Trump for 15 years and Marla Maples for six years.

Till Death Do Us Part: Melania Trump Reportedly Held Off White House Move to Renegotiate Prenup