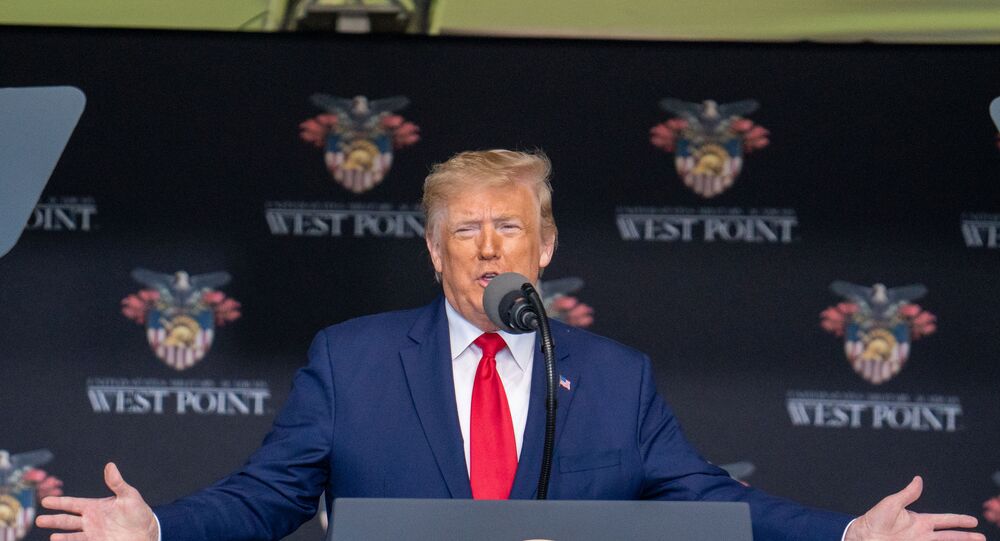 #TrumpIsNotWell Trending on Twitter After His Baby-Step Video Goes Viral

Donald Trump on Saturday was caught on camera struggling with walking down a ramp and lifting a glass of water – something his critics have attributed to frail health. Trump has fired off a defensive tweet explaining the episode, which came on the eve of his 74th birthday.

Footage from Saturday’s event showed the president walked down a ramp in an extremely careful manner and he appeared unsteady on his feet.

Trump descended a ramp extremely carefully at the end of his West Point speech today pic.twitter.com/uMG3KyB1V1

​He later posted an indignant tweet explaining that the ramp was “very long & steep, had no handrail and, most importantly, was very slippery”.

“The last thing I was going to do is ‘fall’ for the Fake News to have fun with. Final ten feet I ran down to level ground,” he wrote.

In another episode from the speech, Trump appeared to struggle with a glass of water and lifted it with two hands.

​This happened at a sensitive time for the president, who turns 74 today. Many of his critics seized on the moment and speculated about his health, with the hashtag #TrumpIsNotWell reaching the top of Twitter trends.

Using an online protractor tool it looks to me like the ramp is at about an 11 degree downward angle.#TRUMPstroke #TrumpIsNotWell #rampgate pic.twitter.com/VDve6v1gas

Multiple videos show: 1) the ramp was not steep, 2) he walked very slowly and very cautiously down it like a toddler still learning to navigate stairs, 3) he did not "run down the last 10 feet to ground level," 4) he is easily triggered over every damn thing.#TrumpIsNotWell pic.twitter.com/xZA4DLkD8T

Mr. President, thank you for now ensuring that tens of millions more Americans will see the videos of you unsteadily walking on the ramp and lifting a glass of water with two hands, and will wonder what they don’t know about your physical and mental condition. #TrumpIsNotWell https://t.co/TC7u7a1lXi

I like presidents who can hold a glass of water.#TrumpIsNotWell

Trump tries to make walking down a ramp sound like he was a survivor of the “Into Thin Air”Everest disaster. Sorry, dude. We all saw the video. #TrumpIsNotWell https://t.co/KjvUnLFECU

​Earlier this month, the White House released the results of Donald Trump’s annual physical, which said that he was in good health.

Trump has had two other similar moments in the past, one during Theresa May’s White House visit in January 2017 and another during his UK trip in July 2018. Both times, he grabbed the prime minister’s hand when they were either walking down or climbing up stairs.

Although some observers at the time viewed the hand-holding as a power play or an act of chivalry, others speculated that Trump may be scared of stairs and ramps — a condition known as bathmophobia.

“He hates heights where you can see the ground or sharp inclines even more than germs,” a UK government source told the Daily Mail in 2017. “He particularly dislikes staircases and his biggest nightmare of all is a dirty stair rail.”

However, there has never been any mention of the condition in Trump’s public medical reports, and the president has been seen descending and ascending stairs numerous times without visible trouble.

Trump has also once mocked Barack Obama for an ungracious descend. “The way President Obama runs down the stairs of Air Force 1, hopping & bobbing all the way, is so inelegant and unpresidential,” he tweeted in 2014. “Do not fall.”