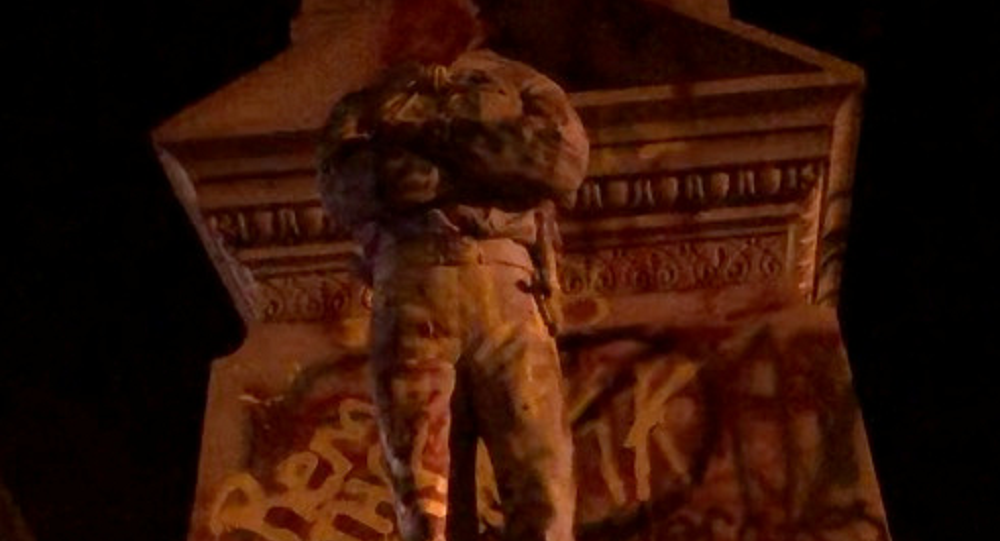 Monuments honoring Confederate leaders have been increasingly targeted during ongoing protests across the United States. Sometimes, they have been removed by demonstrators themselves, and not always in accordance with safety requirements.

Chris Green, a 45-year-old from Portsmouth, who suffered serious injuries from a falling Confederate statue during Wednesday protests in Virginia was placed in a coma, the Daily Mail reported citing his wife’s comments.

Tonieh Brisbane-Green said that her husband of 13 years flatlined two times on the way to hospital and doctors “were surprised” that he “even made it” due to the extent of his injuries.

“I just feel like I’m in a dream right now. Like, I just need to be pinched to wake up and everything will go back to normal”, Tonieh said.

As protesters in one #Virginia city tore down parts of a #Confederate monument Wednesday night, part of the falling statue fell on to a protester, who has been left in a coma. https://t.co/hN4T39jRFP pic.twitter.com/0TAbowo5TN

Green was struck as demonstrators gathered around the monument in Olde Towne Portsmouth on Wednesday. The protesters, led by Black Lives Matter 757 organisers, started to dismantle four Confederate statues with the help of hammers and other equipment, footage of the incident has shown. According to 13 News Now, the crowd’s “celebratory mood” was short-lived after one of the statues suddenly landed on Green.

One man injured during protest as a piece of the confederate monument fell. Police asking for everyone to leave . #13NewsNow pic.twitter.com/EvGoKovKEz

The man’s wife noted that she was not aware of the exact details of the episode but was told that her husband was not facing the statue when it fell on him.

“And then I heard it was hard for the ambulance to even get to him because of the crowds”, Tonied said, arguing that she supported the ongoing protests but only in a “peaceful manner”.

“There was no need to do all of that especially while there were so many people around that statue knowing that somebody’s going to get hurt”, the woman told the media.

The Virginian-Pilot reported on Thursday that the father-of-two was in a stable condition following his life-threatening injuries. The demonstration’s organisers have now set up a GoFundMe page to help Green’s family.

The Virginia State Police will now conduct an investigation into the details surrounding the incident, after a subsequent request was filed by Portsmouth Police Department.

© AFP 2020 / JUSTIN TALLIS
UK PM Says It's 'Shameful' That Churchill Monument is at Risk of Attack by Protesters
Confederate statues and other monuments allegedly glorifying racism, slavery and imperialism have been targeted in the United States and parts of Europe amid ongoing riots over the death of African-American man George Floyd in police custody on 25 May.

The public hearing in relation to the moving of the Confederate monument in question was reportedly scheduled for 28 July, following permission from the Virginia General Assembly. However, according to reports, when the statues were taken down on Wednesday, the police who were present at the scene did not step in to stop protesters from dismantling the monument.