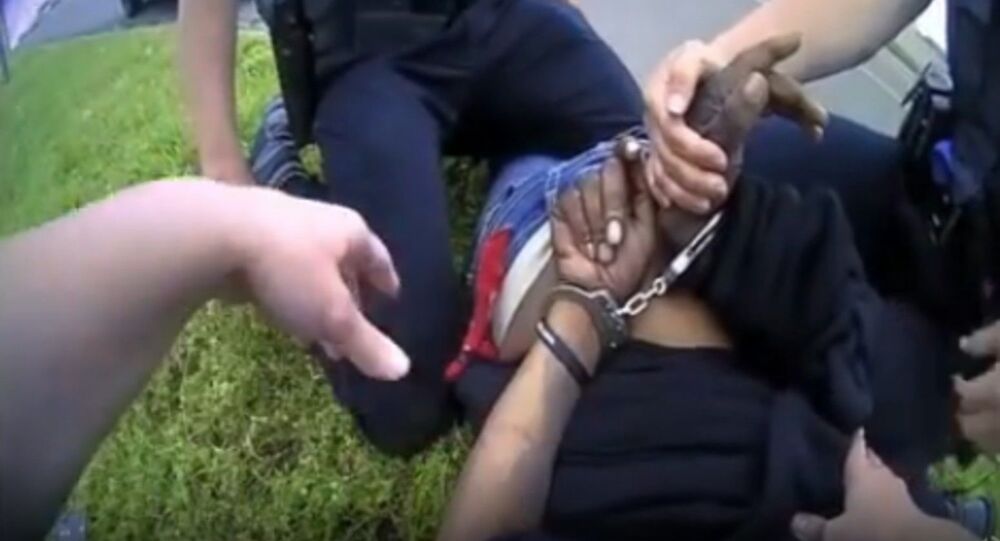 A release of body camera footage by the Oklahoma City Police Department (OKCPD) has reignited calls for reform and justice, as officers depicted in the video recording are overheard denying a dying man’s request for his medicine and countering his plea of not being able to breathe.

The previously withheld raw footage of the OKCPD shows cops responding to a call of a man brandishing a weapon on May 20, 2019. After catching up to fleeing suspect Derrick Ollie Scott, officers detained the 41-year-old and removed the weapon from his person.

“I can’t breathe,” Scott pleads as cops attempt to get his hands behind his back before cuffing him.

Be advised, the following footage contains scenes that some may find disturbing.

Despite Scott being handcuffed and disarmed, officers are seen kneeling on the 41-year-old Oklahoma resident. At one point, all three responding officers are observed putting pressure on Scott.

One officer is overheard claiming that Scott, now silent, is pretending to be unconscious. OKCPD Sgt. Jennifer Titus administered CPR to Scott, however, he was declared unresponsive by emergency medical services and was later pronounced dead at a local OKC hospital.

An autopsy report obtained by NBC detailed his cause of death as a collapsed lung.

Americans’ demands for the defunding and reformation of police forces nationwide have followed the May 25 death of 46-year-old Minneapolis, Minnesota, resident George Floyd - who, like Eric Garner in 2014 and Scott in 2019, uttered the words “I can’t breathe” before dying in police custody.

The OKCPD’s release of the footage came about following a series of demands issued by the local Black Lives Matter chapter on June 1. Along with its call for the “public release of all video footage of the OKCPD incident involving and resulting in the death of Derrick Ollie Sr.,” the group enumerated several officer-involved cases that it believes have not been properly addressed by the justice system.

The OKCPD has also released both a long-form and “reader-friendly, condensed version” of its de-escalation policies, which were adopted in 2018.

While there are a number of de-escalation and risk management tactics for officers to utilize in accordance with policy, OKCPD Capt. Larry Withrow appeared to dismiss the cops’ actual conduct during Scott’s 2019 arrest and death in police custody.

According to the New York Times, he claimed that Tipton’s comments, in particular, were said during the “heat of a conflict” and that people need to understand that “officers are fighting with someone at that point.”

“It’s not uncommon for people when you’re struggling with them, when you’re trying to get them into control, to say, ‘I can’t breathe.’ You hear that frequently.”

Winthrow also asserted Oklahoma County District Attorney David Prater and the medical examiner’s office found there was “no indication of any wrongdoing.”

A former investigator from the DA’s office has accused Prater of abusing his subpoena powers to obtain the financial records of nonprofit advocacy organization Oklahomans Criminal Justice Reform.

The police department claimed in comments to local outlet KFOR that it would have released the body camera footage at an earlier point if the family had requested it do such. The OKCPD also denied the Scott family’s claim that they were not informed of the 41-year-old’s death until days after he had passed.

“Now I really know the truth as to how he died, so it’s a whole lot more painful on the inside. I mean, it’s almost unbearable … to know that he took his last breaths trying to get people to hear him,” Derrick Scott’s mother, Vickey Scott said in an interview with The Oklahoman, calling the treatment of her son “one of the most inhumane things” she has ever seen.

"I want every mother to watch that … and imagine that's your son's last so many minutes of life, and he's dying, and they're saying that he's faking."

‘We Got Your Back!’: Florida Police Union Invites Fired, Disciplined Cops to Join Force