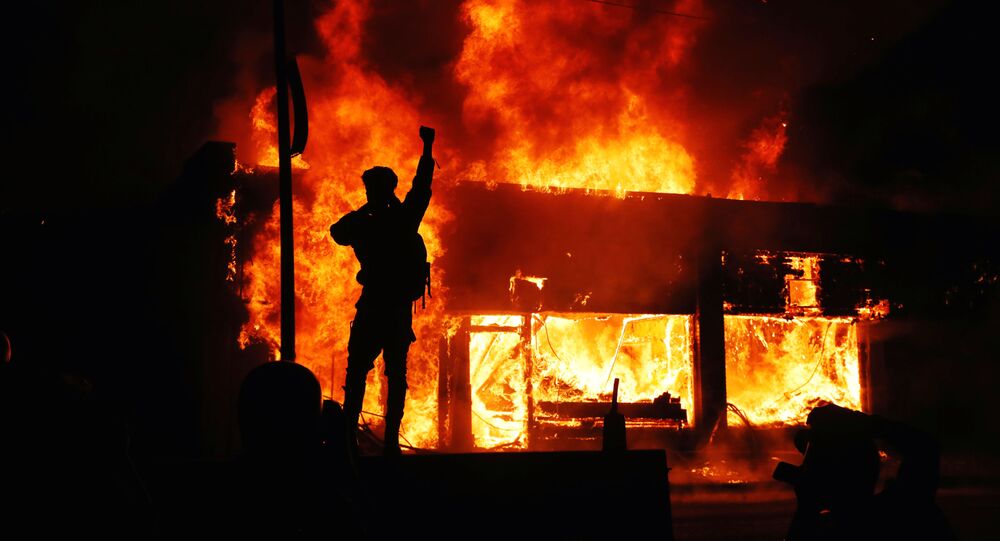 Earlier this month, President Donald Trump urged police to get "tough" on rioters amid the ongoing protests across the US following the 25 May death of black American man George Floyd at the hands of a white Minneapolis police officer.

The Department of Justice (DOJ) has reportedly filed scores of charges for federal offences related to the consequences of the current George Floyd protests in the US.

According to a DOJ document obtained by Fox News, the charges pertain to a protester aiming a laser pointer at an FBI aircraft, setting the Third Precinct police station in Minneapolis on fire, and impersonating a US Marshal in Orlando.

The document, in particular, cited police officers as saying that there were "several incidents of individuals pointing green laser beams at law enforcement aircraft operated by the FBI and Wisconsin National Guard”.

On 7 June, law enforcement agents on the ground reportedly "observed two individuals near W. Chambers Street and N. 1st Street in the City of Milwaukee pointing a green laser beam at an FBI airplane; one of the individuals pointing the laser beam matched the description of Jeremiah Belen”, who was then detained.

In a separate development, Branden M. Wolfe, 23, of St. Paul, Minnesota has been charged with aiding and abetting arson, after he was arrested on 3 June while he was wearing several items stolen from the Third Precinct, including body armour, a police-issue duty belt with handcuffs, an earphone piece, as well as a baton and a knife.

© REUTERS / Jonathan Ernst
Police officers look on as a car burns in the back as protesters continue to rally against the death in Minneapolis police custody of George Floyd, near the White House, in Washington, U.S., May 30, 2020.

Police then recovered a "riot helmet, 9mm pistol magazine, police radio, and police issue overdose kit" from Wolfe who reportedly confessed to throwing a barrel into the fire at the precinct.

The DOJ document also singled out Wesley Mobley Jr., 36, of Orlando, Florida who faces one count of false impersonation of a federal officer; if convicted, he faces up to three years behind bars.

Earlier this month, Mobley was "forced to stop his vehicle because of passing protestors” and then pulled out "what appeared to be a law enforcement badge, waved it at the protestors, and stated something to the effect of 'Do you want to get arrested? Do you want to go to jail?'", according to the document.

One of the protesters purportedly said in response, "he [Mobley]’s a Marshal!”.

The DOJ is filing the charges as President Donald Trump called on police earlier in June to get "tough" on rioters when responding to a tweet by a former CIA analyst condemning protesters, who hurled Molotov cocktails at law enforcement officers.

POTUS previously threatened to deploy the US military in cities that refused to call in the National Guard and failed to quell the violent protests. He pledged to enact the Insurrection Act, allowing the president to deploy troops domestically in order to end widespread public unrest.

In late May, Trump announced that the left-wing movement Antifa was “quickly shut down” by the US National Guard amid the protests and that the US government was set to designate the group as a terrorist organisation.

The ongoing protests were sparked by the death of 46-year-old African American George Floyd in Minneapolis police custody on 25 May. One of the police officers placed his knees on Floyd's back and neck, pinning him down to the ground and restricting his ability to breathe.

While most of the protests against police brutality and negligence towards those in the black community remained peaceful, some turned violent, with rioters attacking law enforcement, vandalising and looting shops, as well as assaulting ordinary US citizens.