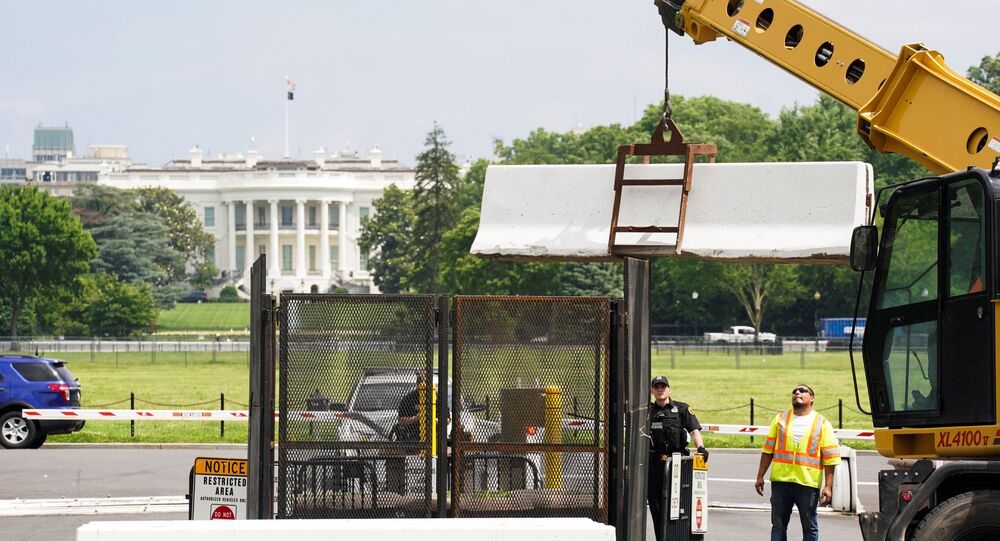 Workers have started removing the temporary fencing around the White House complex, but Secret Service officials say that other barriers will remain ahead of additional scheduled protests this weekend.

“The temporary fencing on the south side of the White House complex, to include the Ellipse, will be removed on or about June 10,” a Secret Service spokesperson told Fox News on Wednesday. “The Secret Service is in continuing discussions with the US Park Police regarding the temporary security fencing in and around Lafayette Park.”

I made the 1.75-mile lap around White House grounds this morning. Crews have begun the process of removing some of the fencing that went up last week. Here’s some of what I saw: pic.twitter.com/7KzQabGSQO

Under orders from US Attorney General William Barr, US Park Police (USPP) used various crowd control weapons to forcibly remove protesters and journalists from Lafayette Park on June 1. Moments later, US President Donald Trump emerged from the White House for a photo-op in front of the charred St. John’s Episcopal Church. Local religious leaders have denounced the act.

Initially, a USPP spokesperson stated that no “tear gas” was used by officers during the clearing of Lafayette Square. However, Sgt. Eduardo Delgado asserted on Friday that it “was a mistake” to use the words “tear gas,” rather than more specific terminology, as the pepper balls deployed by officers do indeed irritate one’s eyes and cause tears, Vox reported.

Hours later, acting USPP Chief Gregory Monahan walked back Delgado’s statement, saying officers “did not use tear gas or OC Skat Shells to close the area at Lafayette Park in response to violent [protesters],” according to Vox.

The Washington Post and local news outlet WUSA9 have both observed video and physical evidence that pushes back against US officials’ claims regarding tear gas.

Furthermore, Barr falsely claimed that pepper spray is “not chemical” during his Sunday appearance on CBS’ “Face the Nation.” Both the US Centers for Disease Control and Prevention and Barr’s own Department of Justice have defined pepper spray as a chemical irritant or “riot control agent.”

White House Press Secretary Kayleigh McEnany distanced the White House from responsibility for the incident, while also declaring that it stands by the actions taken.

“There’s no regrets on the part of this White House,” she said on Monday, noting that Barr, not the president, issued orders to clear the park. “Park Police acted as they felt they needed to at that time in response … We stand by those actions.”

US Treasury: Government Spent 3 Times as Much Money in May as It Received in Income