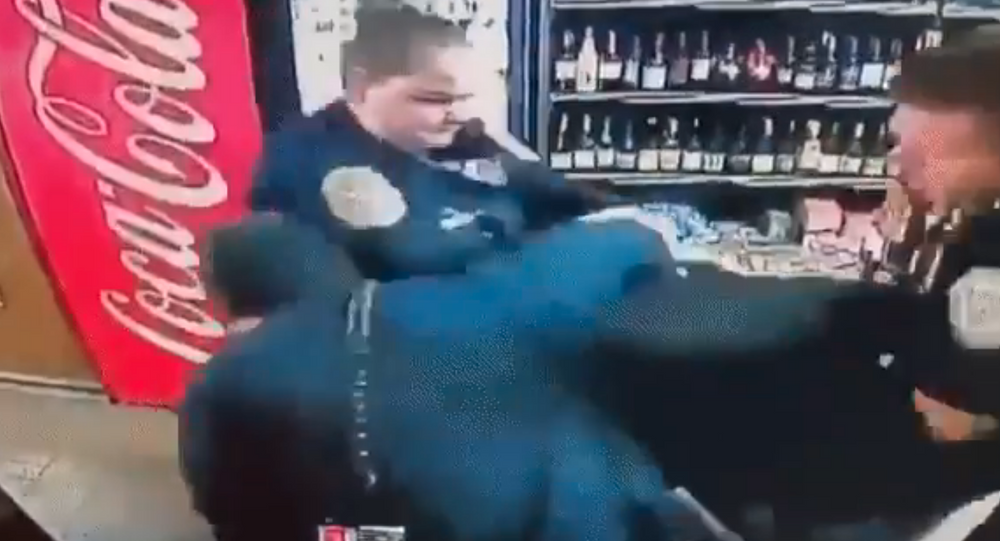 An Alabama police department is at the center of a national controversy regarding possible misconduct after a now-viral video of a burglary response call appeared to refute issued statements and showed three officers assaulting a store owner who reported a robbery.

The Decatur Police Department (DPD) on Monday held a news conference to address a March 15 event which resulted in the baffling assault and arrest of Kevin Penn - a liquor store owner who ended up with his jaw wired shut after contacting officers to report a robbery.

Authorities also released brief body camera footage from the scene, which begins with officers approaching Penn and telling him to put down his weapon. Though he protests, citing his Second Amendment rights, he removes the magazine from his handgun and declares he is going to file a complaint against them.

Penn is then seen placing the magazine from his handgun on the counter, seconds before two male officers grab and tackle him, with one officer punching Penn in the face. A female officer also piles on Penn soon after.

Surveillance footage obtained from the store and shared by local news outlet AL.com provided a clearer view of the assault, which left Penn with a broken jaw and multiple missing teeth.

Carl Cole, the store owner’s attorney, told AL.com that in addition to being arrested for obstructing a police investigation of a robbery, his client had his jaw wired shut and underwent several weeks of treatment.

Josh Moon of the Alabama Political Reporter republished the relevant portion of the surveillance video and called into question DPD Chief Nate Allen’s Monday claim that Penn was reaching for a gun.

Decatur PD had body cam footage it showed at the press conference today. The chief said the store owner - who called them to report a robbery - was reaching for a gun when he was punched.

Penn has maintained that officers were aware that he was armed, as he detailed in the emergency call that he was holding the burglary suspect at gunpoint. Allen claims officers mistook Penn for the robber.

Despite department claims of transparency, it remains unclear why only one officer’s body camera video was released to the public, despite three being present at the scene.

A complaint has been filed against the officers, and the internal investigation, which began in March, remains ongoing. One unnamed officer has been placed on desk duty.

When asked about his officers’ conduct at the scene, Allen remarked to the outlet that he “would much rather have a punch than an officer-involved shooting.”

The emergence of the DPD’s previously withheld footage comes alongside protesters’ nationwide calls to defund police forces and redirect the funds to social services in their respective localities.

At the same time, many have rejected the protesters’ demands - including US President Donald Trump and Democratic presidential nominee and former Vice President Joe Biden, who fully rejected the dismantling, and also the defunding, of the forces.

“I support conditioning federal aid to police based on whether or not they meet certain basic standards of decency and honorableness," Biden said on Monday. He has since doubled down on his statement, and on Wednesday he proposed $300 million in additional funding for US police departments.